The former director of national intelligence said Monday he has “high confidence” in the conclusion that Russian meddling helped Donald Trump get elected, and that Russian President Vladimir Putin was involved.

James Clapper spoke at the Sanford School of Public Policy about the cybersecurity challenges facing the United States.

“He’s a KGB officer, a good one,” Clapper said. “I worry about that and the way he kind of manages our president and kind of handles him like he’s an asset.”

Clapper said Russian interference was initially to amplify discord, doubt and discontent in the United States. When Trump emerged as the GOP candidate, the manipulation of social media became a clear effort to support the Trump candidacy, he said.

It may not have been solely due to Putin’s animosity towards the Clintons, as some have suggested­ -- though that does exist.

“We can’t expose the evidentiary basis but we had extremely high confidence in the fidelity of the intelligence we had.”

Although some argue there could have been stronger response from the Obama administration, Clapper said he thought the actions were appropriate. He assumed the next administration would continue to respond, but that has not happened.

“The commander in chief refuses to acknowledge the threat posed by the Russians,” Clapper said. During the transition, Clapper went to Trump Tower to raise those concerns with the president-elect, but the news was not well received.

With its population and GDP declining, Russia is in a position of weakness, Clapper said. Putin’s actions and recent announcement regarding new nuclear weapons should be seen in that context.

Clapper’s position as director of national intelligence was created in 2005 based on the recommendations of the 9/11 Commission to help coordinate the efforts of the United States’ sprawling intelligence community. Clapper said the role functions as a principal intelligence and counterintelligence adviser to the president. It also helps manage 200,000 intelligence employees, a $52 billion budget and top security organizations including the CIA, NSA and FBI.

It’s a big job that requires constant awareness of a wide range of world dangers. Clapper said he hesitates to name a most pressing threat.

“I always loathe to do that because you don’t get a pass on the other ones,” he said, listing North Korea, Iran, China, terrorism and weapons of mass destruction.

However, the primary emphasis of the role has shifted, he explained. When he began, much of the concern centered around counterterrorism. Now, there’s more awareness of a wider range of threats, including those posed by Russia. 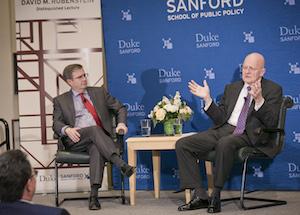 Among these, cyberwarfare represents a new and especially dangerous threat to the United States, Clapper said. And while the U.S. is prepared to respond to attacks with advanced capabilities, choosing to do so can be difficult.

The problem, Clapper said, is that the U.S. attempts cyber activities through a surgical and highly legalistic approach. Other countries cannot be relied on to behave the same way.

Similarly, attempting to respond to North Korea’s hacking of Sony Pictures in 2014 posed more challenges. If the U.S. were to respond through cyberattacks, they would go through China, which raises questions about whether that would count as an attack on China, Clapper said. Ultimately, the administration decided to sanction several North Korean generals.

“What they go after comports with what’s in their five-year plans. They have specific areas of technology they want to pursue and that’s what they go out and steal. They’re very consistent about it,” he said.

The United States must remain vigilant and continuously upgrade its defenses, he noted.

“In our modern, globalized world … this is going to be a continuing challenge for us and defense is unfortunately going to lag behind the offense,” Clapper said.

Clapper’s lecture, moderated by Peter Feaver, professor of political science and public policy, was the inaugural lecture of the David M. Rubenstein Distinguished Lecture series. Named for a Duke alumnus, benefactor and former chair of Duke’s Board of Trustees, the speaker series brings distinguished public policy experts to the university.

This event is part of the yearlong centennial celebration of the late Terry Sanford, Duke’s president from 1970-1985.