What Do Young Voters Look for in a President? “Presidential March Madness” Yields Clues

In 2020, between 3 and 4 million 18- to 21-year-olds will cast their first votes for president of the United States.  These young people will have grown up largely knowing two chief executives—arguably our nation’s most diametrically opposite, back-to-back presidents ever.

So what does this coming-of-age generation value in a leader?  How do they define “presidential greatness”?

Over spring break we aimed to find out, modeling a five-day Duke course after the annual NCAA Tournament bracket.  The “Presidential March Madness” class featured all 44 chief executives grouped in four regions.  Each was seeded 1-thru-11 based primarily on how historians rate their presidencies.

Our students invested 30 hours researching, role-playing and discussing each president’s strengths and weaknesses. They began with seemingly innocuous first-round matchups such as Martin Van Buren versus Herbert Hoover and William Henry Harrison versus his grandson, Benjamin Harrison.  After each debate, the students reached consensus on which president should advance to the next round.

These early conversations helped set the stage for fascinating deeper dives later in the tournament.  For example, Bill Clinton versus Andrew Jackson stoked conversation about Manifest Destiny’s benefits  -- What kind of country would we have today if Jackson hadn’t pursued westward expansion? -- versus its resulting atrocities, including the displacement and destruction of Native Americans.

Read the Duke Chronicle article about the 2018 Spring Breakthrough.

John Tyler versus Andrew Johnson explored the leadership, judgment and priorities of two former vice presidents unexpectedly thrust into prominent roles.  Franklin Pierce versus James Buchanan examined the question of what, if anything, any antebellum president could have done to eradicate slavery while preventing the seemingly inevitable Civil War.

As the week progressed and each administration was explored, the students zeroed in on how they defined “presidential greatness”:

As we look ahead to 2020, there’s no doubt our country will have two (if not three) markedly different options for president. More than any time in American history, the winner likely will hinge on what 18- to 21-year-olds want out of their president. 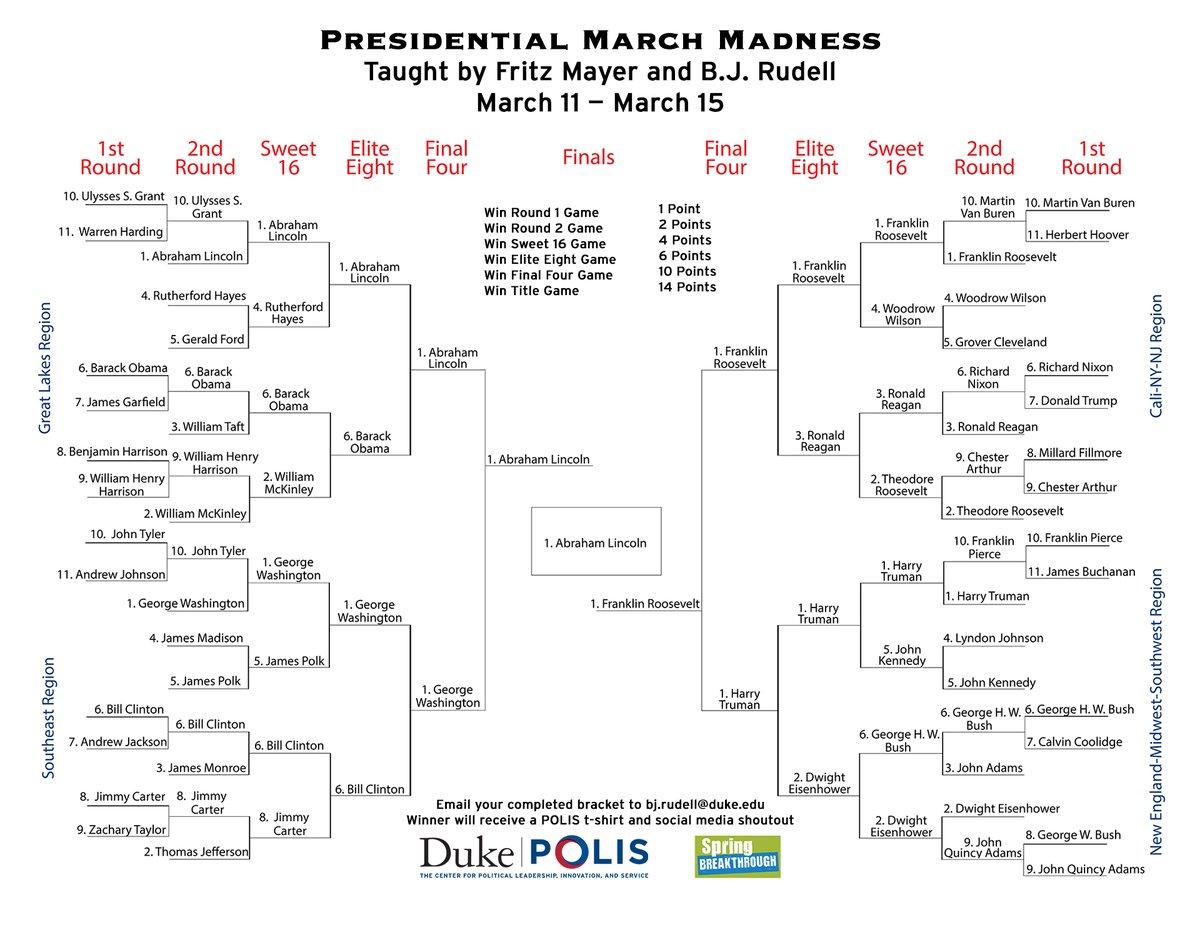 Frederick Mayer is professor of public policy, political science and environment at Duke University and director of POLIS, Duke’s Center for Political Leadership, Innovation and Service. B.J. Rudell is associate director of POLIS.