This season is made possible by our sponsor, Polis: Center for Politics. Established at Sanford in 2015, Polis prepares future political leaders and fosters innovative scholarship related to the pressing political issues of our time.

“Polis is happy to be able to support the terrific research-based storytelling on Ways & Means,” said Deondra Rose, research director of Polis. “I  had the privilege of having my research featured in a Season 3 episode titled “How Sputnik Sent Women to College,”  and it was truly one of the most powerful showcases that I’ve had for my research.”

In the opening Ways & Means episode, Professor William Sandy Darity Jr., an expert on the causes of wealth inequality, makes the case for reparations for slavery. Last summer, the U.S. House considered a bill to start a reparations study commission, and the topic has come up in presidential debates.

“The fact that you have some of the folks who are actual candidates for the presidency even using the term reparations is somewhat of a breakthrough,” Darity says. “And I would argue that there’s more discussion about reparations today than there has been at any point in U.S. history since the reconstruction era.”

Tony Burroughs, a Chicago genealogist, is one of the people who would benefit if reparations ever happen. He traced his family roots to slavery.

That’s exactly what Darity is trying to calculate. 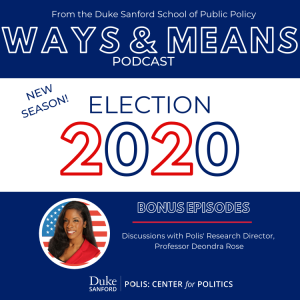 Another episode unpacks the problem of local news deserts – thousands of communities where newspapers have closed down – where citizens don’t have enough information to make informed choices on all sorts of public matters. Professor Phil Napoli has studied whether digital news operations are making up for the closures.

“You’re not as likely these days to see reporters covering county governments, city government school board meetings, town council meetings, all that sort of thing,” Napoli says. “These are important gaps that need to be filled.”

Other Duke people featured in the series include:

Ways & Means is a production of Duke University’s Sanford School of Public Policy, produced by Carol Jackson and Karen Kemp of Sanford and Alison Jones of Duke University Communications. It is hosted by Emily Hanford, senior correspondent for APM Reports, who has more than two decades of experience as a reporter, producer, editor and program host.