Ubong Mark Akpaninyie PPS'12: Taking the Risks in China and Beyond

Ubong Mark Akpaninyie PPS’12 has had a career that has taken him around the world and back—literally.

Akpaninyie currently works as a policy analyst at the U.S. House of Representatives Committee on Foreign Affairs specializing in the Indo-Pacific region, but his fascinating career starts with his time at Duke, when he discovered his passion for China.

“I was really interested in going to China because China at the time had kept creeping up in my coursework,” Akpaninyie said about his public policy studies on international relations. 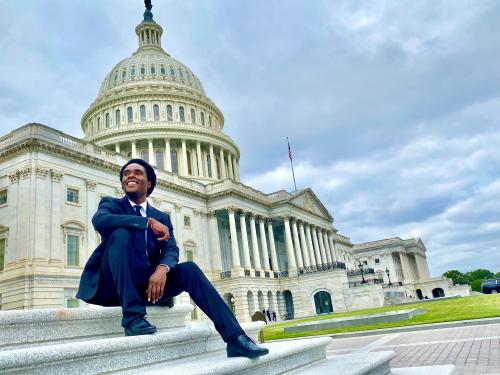 Akpaninyie was given the chance to pursue this passion and move to China as part of the Teach For China program, which he discovered after a conversation with a Teach For America recruiter. Moving to an entirely different country to teach English, especially after only studying Spanish, was a huge decision, but Akpaninyie was ready to take the risk.

Akpaninyie ended up spending three years in Yunnan, China, teaching English in a small village in the southwestern province. In 2015, he decided to transition back into the policy world and moved to Washington, D.C. to begin work on analysis of Chinese development and policy. The next few years were a whirlwind of career transitions for Akpaninyie, facilitated partly by the connections he had made at Duke.

“This journey began with a curiosity, and continued by happenstance,” said Akpaninyie.
He emphasizes how important maintaining his relationships with past professors and mentors were for his circuitous path through Washington, noting that his professors “help tackle unforeseen challenges and give advice on how you can navigate one thing to the next,” he said, “They really ground you down.”

Since getting to Washington, Akpaninyie has worked on a swath of foreign policy projects. He began working at a think tank  analyzing Chinese investment abroad and infrastructure development as well as China’s  growing use of soft power to pursue its foreign policy objectives. and later rose through the ranks to become a staffer of the House Committee on Foreign Affairs. One of his more recent policy issues has been examining  U.S. strategy over      20-year engagement in Afghanistan and the withdrawal, but he and his team are also focused on supporting efforts to ensure that U.S. allies and at-risk Afghans are safely evacuated from the country.

“This is why I do the work,” Akpaninyie said. “I do the work in order to help advance U.S. policy, but also to have meaning and try to do good in the world.”

For the past two years, Akpaninyie’s main passion project has been the Black China Caucus, for which he serves as co-founder and co-president, an especially meaningful project for him as a Black man with a Nigerian background working in the field.

“Black China Caucus is working to amplify and build a community around Black experts that focus on China and making sure they’re included in these conversations, and that their perspectives and their work and their presence is not underutilized and overlooked.”

China has recently been displaying hypocrisy in their treatment of human rights, as they attempt to undermine the U.S. promotion of democracy and human rights through its critique of racial issues in the U.S.  At the same time, China is committing severe atrocities and human rights abuses against its own citizens as well as African immigrants. He has found that his and other Black analysts’ unique experiences enable them to look at policy efforts, especially dealing with China, in a different light.

“I think having perspectives like that in the room that can be easily deployed is very useful, because again you’re bringing stories, you’re bringing narratives that might not necessarily be as readily accessible or apparent.”

When asked about these many career transitions and developments, Akpaninyie had simple advice: follow your passion.

“You just focus on what motivates you, what brings joy and mission-oriented passion.”

So how can any Duke student possibly be as successful as Akpaninyie in just 10 short years? His advice on that is simple as well: take advantage of what Duke can offer you and build relationships you will keep your entire life.

Akpaninyie said quite frankly that public policy is the best major, (“I’m biased, of course,” he said, but we were flattered anyways) because of the countless opportunities placed right in your hands. Not only are qualified and connected advisors available for each student, but there are also talented professors ready to teach and build mentor relationships.

Akpaninyie lauded his professor, Rachel Seidman, with whom he took two courses that he said truly changed his outlook on policy. He is still in contact with her today, and since they both live in Washington now, they meet up often for coffee and a chat.

“It’s not necessarily what I learned in the classroom, but it is also how do you sustain relationships,” said Akpaninyie. “Relationships I was able to form with students and professors are what really ground me.”

Now an alum himself, Akpaninyie was adamant in encouraging current students to reach out to the alumni community and form those relationships they will be able to carry throughout life.
“They want to help, even if they don’t know how,” he said, laughing. “Really leverage the alumni community. It’s all at your fingertips.”

After hearing about all of his dramatic career transitions and the people and experiences that brought him to where he is today, the most poignant advice Akpaninyie left me, as a current Duke Sanford student, was this:

“Use this time wisely, but it’s never too late.”