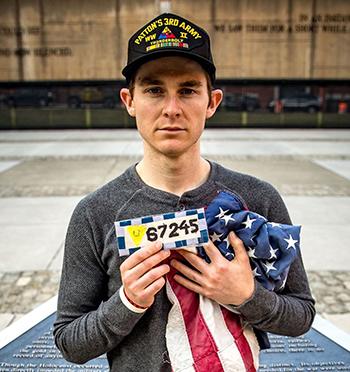 While his post-Duke career started off on the oh-so-familiar trajectory of consulting, what David Estrin PPS’13 is focusing on now is far off the beaten path.  After four years at Accenture Strategy, where he advised numerous Fortune 500 clients as well as the firm’s first corporate philanthropy program, he left to start Together We Remember, a nonprofit aimed at honoring victims of the Holocaust and other genocides throughout history.

“That’s when the greatest and scariest adventure of my career began,” Estrin says. “[With] an effort to build a sustainable organization that could achieve the seemingly impossible goal of ending identity-based violence, once and for all.”

For Estrin, this shift in careers was deliberate. As the grandson of four Holocaust survivors, the promise and responsibility of “Never Again” was engrained in him at a young age.

At Duke, he took part in the Hart Leadership program and studied under Professors Tony Brown, Alma Blount, and many others, all of whom helped define how he saw the world and his role within it.

“Not a day goes by that I don’t reflect on their wisdom. How many classes actually grade based on your growth as a leader and the extent to which you pushed the frontiers of your moral imagination? Not many,” Estrin recalls.

“Their teachings helped me realize that I wanted to head into corporate philanthropy and social impact finance. I was all about the ‘do well while doing good’ mindset.”

However, it was a more personal trigger that pushed Estrin to begin laying the groundwork of Together We Remember: during his junior year, his grandfather passed away.

“I wanted to honor his memory in a meaningful and actionable way, and around the same time I noticed that there was no Holocaust Remembrance program at Duke,” said Estrin.

With the encouragement of faith leaders on campus, notably Imam Abdullah Antepli, then Duke’s chief representative of Muslim Affairs; and Rabbi Jeremy Yoskowitz, Estrin gathered various student groups and planned a 10-hour vigil for victims of genocide and other atrocities. The following year, they organized a 24-hour vigil, engaging hundreds of people in the Duke and Durham communities in reading the names of 50,000 genocide victims.

Pursuing Together We Remember Full-time

Eventually, in 2017, the rise of fear and hate in the U.S. and abroad inspired Estrin to leave his position at Accenture and fully pursue Together We Remember.

“There were quite a lot of challenges to starting and maintaining the organization. First and foremost, I had to get over myself. I knew the work was worthy, but I often wondered if I was worthy of the work. We always celebrate trailblazers who take these big financial and ideological risks, but very few talk about how lonely it can be and how long it can take to build a reliable team.”

Unexpected—yet sometimes entertaining—mishaps also peppered Estrin’s path. One of his favorite actors, Josh Gad, came from a familial background similar to his: Gad’s grandparents also lived through Holocaust. Gad was scheduled to be the final speaker during Together We Remember’s 24-hour virtual global vigil this past April.

“I was speaking to Josh about our families and the meaning of ‘Never Again’ in today’s world. I was delirious, having been awake for 40 hours straight to prepare and host the event, and all of a sudden, our live stream cut off!

“It turned out we had reached the 24-hour limit for a Zoom event prematurely. It was hilarious in the moment, given how far we had come. Everything worked out eventually, with a new live feed, but I would never have been able to script or prepare for that.”

Estrin hopes to build Together We Remember into “an unprecedented movement to foster the long overdue truth, justice, and reconciliation that is desperately needed” in the face of the coronavirus pandemic, racial injustice, and rising authoritarianism around the globe.

“I know that my peers and I will do everything in our power to make such a vision become reality. I owe it to the educators, students, and staff at the Sanford School that supported me throughout it all for getting me to where I am today,” he said.