Study Finds Links Between Exposure to Violence and Obesity in Teens

Teens consumed more unhealthy foods and beverages on days they were exposed to violence, and suffered from fatigue due to poor sleep the next day, according to a new study by Duke researchers. Those behaviors, especially increased soda consumption, are important predictors of weight gain.

More than 20 percent of U.S. adolescents are classified as obese. Obesity rates are higher among low-income children, and the rates are highest among Hispanic and African American children ages 12 to 19.

Children exposed to violence are at greater risk for obesity, but exactly how that occurs is not well understood, the researchers said. 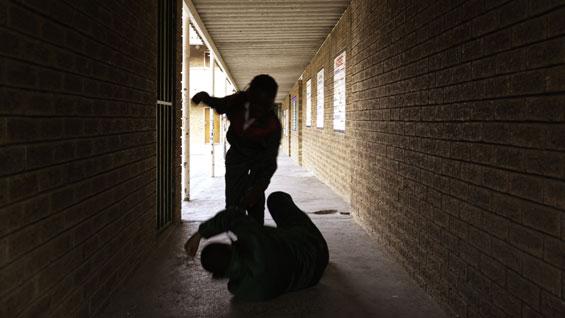 "Teens provided an unique window into their lives through daily mobile-phone reports and streaming data on sleep and activity from their wearable devices,” said Candice Odgers, a professor in the Sanford School of Public Policy and senior author of the study. “Teens’ constant connectivity allowed us to identify same-day correlates of violence exposure versus simply documenting that children exposed to violence are more likely to be obese.”

The study appears online in the journal Social Science & Medicine.

Researchers collected data via cellphone multiple times per day for 30 days from an at-risk group of teens in California -- the miLife study. They compared it to data from a similar study of North Carolina public school students who were more representative of the population as a whole -- the RISE study. More than 500 teens were involved in the studies.

For the California sample, the researchers recruited 151 at-risk adolescents between the ages of 12 and 15 from low-income neighborhoods. The participants completed an initial assessment, with at least one parent participating, which included a baseline measurement of body mass index (BMI). BMI was also assessed 18 months later.

The teens were given cellphones programmed to prompt them to complete a survey three times a day for 30 days.

Participants reported on their exposure to violence each day, their consumption of fast food, sodas and caffeinated drinks, their lack of consumption of fruits and vegetables and their physical activity. They also logged their hours of sleep, sleep quality and tiredness.

To assess exposure to violence, the surveys asked if teens had witnessed physical fighting at home, school, their neighborhoods or somewhere else.

The California teens reported unhealthier diets on the days they were exposed to violence and reported feeling more tired on the days following that exposure. The unhealthy diet choices include increased soda consumption. The amount of daily soda consumption, in turn, was the strongest predictor of weight gain across early adolescence.

The sample from North Carolina also reported being more tired on days following exposure to violence. However, they did not report increased same-day unhealthy diet consumption.

Both groups reported increased physical activity on days they were exposed to violence, a finding researchers did not expect. Wearable device logs showed that adolescents took, on average, 1000 more steps on those days compared with other days.

“Obesity among young people poses a significant threat to the health of this generation,” said Joy Piontak, an affiliated scholar in the Sanford School of Public Policy and the study’s lead author. “Adolescents’ mobile devices have been previously identified as part of the growing obesity epidemic. But, they can also provide valuable tools for understanding and hopefully improving the health of children.”

Early adolescence is a key period for the development of eating habits and strategies for coping with stress. Many children, especially those growing up in low-income neighborhoods, experience violence in their daily lives. Yet the new study is among the first to examine potential links between daily violence and obesity.

These findings may be useful in addressing the high levels of obesity and of health disparities in children in the United States.

The miLife Study was supported through the William T. Grant Foundation and the Verizon Foundation. The RAISE study was supported with funding from the National Institute on Drug Abuse Center for the Study on Adolescent Risk and Resilience (P30DA023026).