Student Voices: Perspective on the Stand for Justice Event

On September 21, Sanford hosted the “Stand for Justice” event in partnership with the Hart Leadership Program and the Wilson Center for Science and Justice. This was the first event within the “Stand for” series, which addresses the topics of justice, democracy, strategy, community, and equity.

These are all organizations and people that are doing challenging work in dismantling the prison industrial complex and serving people that have been systematically funneled into the criminal justice system.

It was interesting to learn about the various backgrounds of the panelists and how they found themselves in their current policy roles.

Karakatsanis made his way into the policy realm through his experience as a public defender and exposure to the injustices during the Ferguson Uprising of 2014 in response to the police murder of Michael Brown. Tylek’s previous work included working in the finance industry. Frederique spoke about her beginnings as an intern at the organization where she is now executive director and her social work background.

What resonates with me personally after learning about the panelists’ stories is that we all came into the policy world as witnesses to the deeply unsettling and immoral consequences of policies.

For the question that was asked about their work in relation to social movements, the panelists spoke to the importance of coalition building in their work and bringing the people who are directly impacted to the policy decision table. I appreciated Tylek’s point about the overall need for a shift in the public narrative and Frederique’s point about policy codifying the change of hearts and minds. Karakatsanis pointed to a facet of his work with the legal system and how cases like Brown v. Board were not even possible without the building of social movements and their disruption of mainstream “misnarratives.”

Coming from my own experiences as a queer person of color within the academy, I am constantly trying to be intentional in orienting the work I do in relationship with social movements.

As Tylek mentioned, there is an intersection between the prison industrial complex and police, especially in terms of how these mechanisms function to undermine the socioeconomic well-being of disenfranchised communities. Frederique made an important point on how carcerality shows up in many institutions, such as education and healthcare, and there is a growing unified demand across movements for abolishing all conditions that make carcerality possible. Karakatsanis raised an important point about how systems reproduce themselves and as it pertains to what justice means for people intentionally targeted by the carceral state, policy makers are being called into a new innovative landscape that will shape the way we as society address social harm. To take that consideration further, I can connect that to Tylek’s analysis of how there are financial incentives in place that make these mechanisms profitable.

To reiterate Tylek’s point, this event touched on many aspects of the legal system and how intricately it has been woven together to systematically harm communities and more specifically black, brown, poor, immigrant, disabled, and LGBTQ+ communities. In light of the recent rulings after the police murder of Breonna Taylor, we as policy makers and society are called into reckoning with what justice means when the legal mechanisms to apply it are inherently biased.

In the age of COVID and the (re)unveiling of the socioeconomic and political reality of marginalized communities, it may be easy to just revert back into ritualized and traditional ways of thinking about and doing our work as policy makers.  But as compassionate solutionaries, we need to put our reimagings into action and so I have to remind myself of what I stand for. In reflection of Terry Sanford’s words, I know that I stand for justice.

What do you stand for? 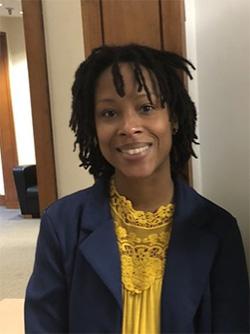 Mandee Sheff studied psychology with a minor in Spanish as an undergraduate at the University of North Carolina at Greensboro. Mandee has been a political canvasser for issues related to education, women’s healthcare, and environmental justice. Prior to pursuing the MPP, Mandee served two years in the AmeriCorps VISTA program and served communities impacted by homelessness in Charlotte, NC and in rural communities across North Carolina that have been impacted by the systematic divestment of resources. Mandee’s interests include using an intersectional analysis of the historical implications of the policies that have shaped the society we live in today with a focus on the prison state and its systematic harm to communities.