Sanford students are strongly encouraged to “Stand for Something.”

Every day, we learn about the most pressing issues facing the planet and with each class we add new tools to our toolkit. Sanford alums can be found across the country and globe using the skills they learned here to address problems and do good. However, universities struggle with how to bridge the gap between the classroom and the “real world” that they teach about. I believe Sanford has found a pretty great answer.

Each semester distinguished guests and professionals are invited to bring the world’s current issues directly to Sanford’s students. Whether it be climate change, national security, or education policy, no topic is left untouched. I have been lucky enough to attend talks by Raymond Santana and Yusef Salaam of the Exonerated Five, former ambassador to the UN Samantha Power, and most recently former Deputy Chief Justice of South Africa Dikgang Moseneke.

Dikgang Moseneke has had a rollercoaster of a life. At age 15, he was imprisoned on South Africa’s infamous Robben Island. While in jail alongside well-known leaders such as Jacob Zuma and Nelson Mandela, he began his “education project” reading hundreds of books and getting two bachelor’s degrees before being released. Moseneke would later go on to practice law and rise to become one of the premier defenders of individuals fighting against the apartheid regime. Eventually, he would help rewrite the South African Constitution, head the Independent Electoral Commission that oversaw the nation’s first democratic elections, and serve as Deputy Chief Justice. 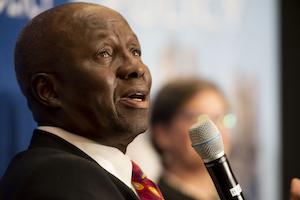 Hearing Moseneke speak was like taking a semester long master’s course in an hour. He discussed his reflections on the efficacy of the first post-apartheid government and his thoughts on the current state of affairs in South Africa and abroad. He also expressed his deep conviction for the need of highly educated and motivated individuals to continue the good work being done across the world. Moseneke quipped, “We cannot outsource our duty to escape our uneven past.”

Moseneke brought up some of the big issues us Sanford students discuss every day. Educational institutions are the “bulwark against injustice,” but how can we decolonize our institutions and make education equitable and accessible for all? How can marginalized groups negotiate economic equality in a system that’s structure is inherently flawed without “killing the golden goose” of economic prosperity and production? How do we balance the need to be “like a pine tree,” steadfast and unwavering in our values, and the need to be “like a willow tree,” flexible and able to deal with adversity?

These questions are not easy, but we can’t make things less complicated without discussing them. I was personally moved by Justice Moseneke’s optimism; how he was able to find light in such a bleak moment in his life is inspirational. Sanford affords its students the privilege of being in the same room, talking about some of the world’s toughest issues, with the best, brightest, and most influential. And quite frankly it’s pretty awesome having some of the world’s biggest policy stars as professors for an hour.

Dikgang Moseneke, who rose from a human rights leader during apartheid to Deputy Chief Justice of South Africa, is a Rubenstein Fellow during the spring semester of 2020 at Duke University.

Tyler Strobl is a first-year MPP candidate in the Sanford School of Public Policy.