Student Voices: A House of Cards in Foreign Policy

Foreign policy has been likened to a game of chess: one in which major geopolitical actors anticipate each other’s' moves and strategize accordingly. But New York Times columnist Eric Schmitt described recent foreign policy crises similar to those in Ukraine and Afghanistan as a house of cards: one in which shaky assumptions about the geopolitical landscape severely undermine the effectiveness of international relations and strategizing. When powerful world leaders miscalculate the conditions necessary for their success, the consequences can be devastating.

This was the insight Schmitt offered on April 14th during a discussion about his career reporting on foreign policy challenges with Ambassador Miriam Sapiro about Ukraine, Afghanistan, China, and journalism, presented by Polis, the Center for Politics at the Sanford School of Public Policy.

As a three-time Pulitzer Prize winner, Schmitt eloquently weaved historical and contemporary insight about international conflict together to answer many of the questions Americans have about the major foreign policy disasters of today.

As someone who is not particularly well-versed in the complexities of foreign policy, I found his insight particularly illuminating. When Putin invaded Russia and the United States pulled out of Afghanistan, I could not help but watch and wonder, How could this have happened?

Schmitt’s insight demonstrated that these crises were caused by geopolitical miscalculations and intelligence failures which created a shaky foundation for foreign policy execution. As a result, major powers like the United States and Russia had their plans easily toppled by unforeseen challenges and changing circumstances. Given that the United States and Russia are two of the world’s most influential global powers, the idea that they could make such catastrophic mistakes was frightening. But it was also illuminating: how else could we improve our foreign policy moving forward?

Amb. Sapiro began by asking Schmitt about the pressing foreign policy topic on most people's minds: Ukraine and Russia. Why was Putin's strategy failing?

To create a sound foundation for foreign policy, strategists and leaders must understand relevant history, key actors and their motivations, as well as recognize any strategic openings for policy execution, Schmitt outlined. Putin didn't do these things. Instead, he made severe miscalculations about the feasibility of a military operation to seize Kyiv which resulted in a prolonged, devastating conflict.

First, history. According to Schmitt, Putin's first fundamental error was believing that Ukraine is a part of Russia.

"Putin has never viewed Ukraine as a real country," Schmitt argued. "He sees them as Russians gone astray."

Thus, Putin has utilized a series of military conflicts to create conditions more favorable to an invasion of Ukraine. Invasions of Georgia and Crimea and the extended conflict in the Donbass, an eastern region in Ukraine, were conducted to increase the likelihood of a successful invasion.

Next, major players. Schmitt believes Putin views himself as a czar-like figure, making his desire to rebuild the Soviet Union his "messianic" calling. It doesn't help, either, that the United States had recently attempted to exit Afghanistan with disastrous consequences in an overwhelming display of incompetence. With his biggest geopolitical rival demonstrating an inability to effectively utilize its military, Putin saw a window of opportunity opening.

So, Putin decided to invade. And thus far, he has failed to achieve his goals. From Putin's perspective, the conditions may have been in his favor, but Schmitt disagrees. As a journalist who has covered foreign policy and international conflict for decades, Schmitt could take an outside perspective and identify where and how Putin failed.

I thought that his valuable insight demonstrated the importance of a strong, free press for holding the government accountable. Schmitt showed that often it is journalists who are able to analyze the policy landscape from the ground up, providing essential insight into where and how policy went wrong. 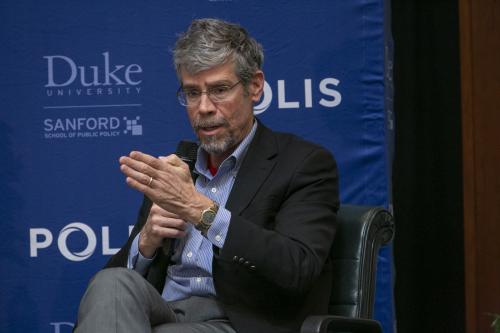 Principally, Putin failed to anticipate the strength of Ukrainian resistance to the invasion, and overestimated his military's capabilities. The Ukrainian public united with the military to resist Russian invasion using guerrilla style warfare. The Ukrainian military was "resilient and nimble," said Schmitt. In contrast, the Russian military had no central focus or commander and was disjointed and disorganized.

Crucially, however, Schmitt believes that Putin will not back down. Unfortunately, he does not believe that Putin's military has been communicating to him how bad things really are, and he does not see any negotiations in sight. If, however, Putin continues to make unfounded assumptions about the foreign policy landscape, he may continue to be pushed back by Ukrainian forces.

Despite his grim prediction about the future of the Ukrainian conflict, Schmitt’s analysis gave me hope for the role that journalism can play in promoting better decisions by governments in the future.

The U.S. “House of Cards:”
the Afghanistan Withdrawal

The United States is not immune to similar lack of foresight resulting in foreign policy failure. Much like in Ukraine, a "house of cards" scenario took place during Biden's attempt at withdrawing troops from Afghanistan.

Although Schmitt believed withdrawal was inevitable, a series of miscommunications and intelligence failures created the conditions for a withdrawal which ended in disaster. The failure of the military and state department to communicate their plans to each other; unawareness of the strength of the Taliban in Kabul; an "internal rotting" of the Afghani security system; and a gutting of the state department's visa program during the Trump administration were the foundations upon which withdrawal from Afghanistan was executed.

Absent an anticipation of the weaknesses of these foundations, failure was almost inevitable. The military began to withdraw from Afghanistan before the State Department had adequate time to prepare visas for American allies and informants as the Taliban took hold of Kabul. As a result, many Afghan people are in hiding. To make matters worse, the Taliban has not upheld their promise to allow women to attend school. This major foreign policy failure is a "political black eye" for President Biden, Schmitt stated.

The Importance of Good Journalism

The insights Eric Schmitt provided into the major foreign policy challenges of today demonstrates how crucial journalism is for revealing  the often opaque nature of foreign policy and the decisions that occur behind closed doors. To the public, and even to major world leaders, success or failure of a foreign policy mission might be imminent; but to journalists, the future is far from certain. Their observations behind the scenes and from the front lines are essential for future foreign policy decision-making.

To Schmitt, the best kinds of journalists "take risks, push the envelope, and don't ask permission, they ask for forgiveness." To close his talk with aspiring public policy graduates and potential future journalists, Schmitt encouraged students to push their comfort zones and pursue their passions.

As a public policy student, Schmitt inspired me to analyze the foundational assumptions upon which policy is executed in order to anticipate major failures. And, he encouraged me to look into a career in journalism-a career where I can promote better policy making and hold the government accountable by providing valuable insight to avoid future “house of cards” scenarios.

Chloe Nguyen is a sophomore majoring in public policy and psychology. She is passionate about understanding how intergroup psychology affects politics, with a focus on political polarization and racism. At Duke, she has conducted research on how to promote better political discourse on campus and has worked with formerly incarcerated people to assist them with re-entry into their communities.