The day the Russian military launched an invasion into Ukraine, Sen. Tim Kaine (D-Va.) points to internal divisions within the U.S. as the biggest threat to national security, closely followed by the global struggles between authoritarian and democratic countries.

In an online event hosted by Polis: the Center for Politics, Kaine had a wide-ranging conversation with Ambassador Miriam Sapiro, the inaugural Polis Distinguished Fellow.

“We need to harness our differences, to be able to create a synthesis that is a better way,” Kaine said and alluded to Lincoln’s speech about “a divided house cannot stand,” given a few years before the Civil War.

The Toll of the Past Two Years

“The past two years with COVID have been brutal, it takes a toll on people,” Kaine said, when asked about the upcoming mid-term elections. 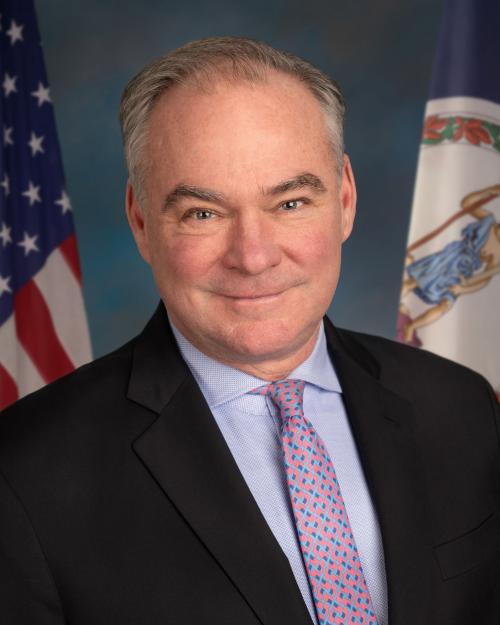 His own family is very lucky, he said, with good jobs and resources, yet both he and his wife had COVID-19, two of their children lost their jobs, and he knows nine people who have died from it.

It’s not a matter of passing laws, but of law enforcement resources, especially more investigations.

If people are feeling anxious and sour in September, they tend to take out those feelings on the party in power in November, the senator said. But Kaine still sees some positive trends, in a strong economy, rising wages and the number of infections and deaths from Omicron coming down.

If President Biden gives a speech acknowledging how tough things have been, but also pointing out how Americans are tough people, it doesn’t have to be bad from the Democrats, Kaine said.

“Nobody gives a better comeback speech than Biden,” he said.

Sapiro then asked about possible term limits for Supreme Court justices and for Congress.

“If I were designing it from scratch, I would require a justice from each circuit” to better reflect the geographic diversity of the country, he said. There are too many justices from the D.C. - to-Boston corridor.

“I am excited that we will soon have four women” on the Supreme Court, he said.

Kaine opposes term limits in Congress, because then the lobbyists “are the ones with institutional memory,” and that tilts the power away from the people.

The greatest challenge of the next decades is the realignment of authoritarian countries versus democratic ones and the complications from non-state actors, he said. Kaine sees growing alliances between countries such as Russia, China, North Korea and Iran. It’s a full-dimensional challenge – military, economic, cyber.  The way to win is through showing democracy is better, he said.

Regarding Russia’s invasion of Ukraine, Kaine supports President Biden’s position, which also has bipartisan support in Congress. There will not be U.S. troops on the ground in Ukraine, but we will defend our NATO allies, he said.

“Germany didn’t want to shut down Nord-2, but they did,” he said.

Chinese President Xi Jinping “views Taiwan the same way Putin views Ukraine” -- as territory that should be reclaimed, Kaine said. It also seems to be slipping away, as Taiwanese politics have turned away from the mainland, he added.

The difference is that the U.S. does have a defense treaty with Taiwan, and Biden made it clear to China that the U.S. would respond to Chinese aggression. The alliances between the U.S., U.K., Australia, India and Japan have been strengthen and could help deter an attack, he said.

Being a Vice-Presidential Candidate

Sapiro asked what it was like being Hilary Clinton’s running mate in 2016.

He got the call when he was at a campaign event supporting the incumbent senator in Rhode Island. When she called, she said, “I want to tell you why. There are people who might be better politically, but if anything happened to me, I think you would be a good president.”

“She felt such a weight of responsibility,” he said. “I felt very humbled by that.”

Kaine thought they would win, but also that Clinton was the underdog because she was a woman.

“There is an enormous double standard in how we treat women,” he said, pointing to how the FBI revealed they were looking again at Clinton’s emails, but not that they were also investigating Trump.

“I never experienced it, because I am a man,” Kaine said, but saw the intensity of it during the campaign.

For her closing question, Sapiro asked what advice the senator had for students interested in a career in public service.

“My one piece of advice, a strong general rule, is that the most effective people in service are those who have developed expertise in something other than politics,” he said.

People that have been cops, teachers or doctors, everyone turns to them when there is legislation in their area of expertise. “Have a passion, and bring that into politics.”