Former U.S. Secretary of State Madeleine Albright was both humorous and somber Thursday during a dialogue with Judith Kelley, dean of the Duke Sanford School of Public Policy, about threats to democracy, foreign policy and the responsibilities of citizenship.

Describing herself as having attended college “sometime between the invention of the iPad and the discovery of fire,” Albright, 81, delivered the David M. Rubenstein Lecture to a full house in Page Auditorium. She served as secretary of state during the Clinton administration, and was the first woman to serve in that role.

She spoke about growing up in Czechoslovakia, whose democratic government was taken away twice, once by the Nazis and then again by the Soviet Union. Her family immigrated to the United States in 1948.

Her father, diplomat Josef Korbel, told her, “I’m not sure Americans understand how fragile democracy is and take it too much for granted.” To succeed, democracy requires engaged citizens and voters, she said. Her comment that high school education doesn’t give sufficient emphasis to the responsibilities of citizenship drew applause from the audience.

She cited a number of factors working against democracies today, including “globalization and facelessness,” rapidly changing technology, and a breakdown of the social contract. There are also threats from other countries, such as Russian propaganda, and the growing influence of China.

“We forget that Putin is a KGB agent and he has played a weak hand very, very well,” Albright said, adding that Russia and China are constantly probing into areas where the U.S. has stepped back.

Some people think her recent book, Fascism: a Warning, is alarming, she said, adding, "It’s supposed to be alarming.”

When you have a leader who identifies with one group and says, “I’m with you,” and those other people are the source of the problem, “that is the beginning of authoritarian government,” she said.

Kelley asked, “Have we lost trust in one another, and what does that mean for democracy?” Albright described growing sentiment that government isn’t responsive.

There have been enormous changes in society and technology and some systems worked in the 20th century but don’t work now, she said. Pointing to the Arab Spring, she said elections in Tunisia and Egypt came too quickly. Social media made it easy to organize protests, but there was insufficient time spent building the relationships and partnerships that could make a government work. Many people were dismayed by the apparent chaos, and that made it easy for an authoritarian to step in.

She warned against the growing use of “the fear factor” in American politics, which operates by turning others into enemies and scapegoats and makes our democracy vulnerable to fascism.

She also warned against U.S isolationism. While acknowledging several times that Americans don’t want to be “the world’s policeman,” she still views the U.S. as the indispensable nation in multilateral talks.

“The world doesn’t work well without the U.S.,” Albright said.

“Americans are safer if other countries are democracies, but it’s not simple and it takes time,” she said.

During the Q&A session, one student asked for advice for women going into a male-dominated field.

Albright stressed the importance of having women in positions of power, which makes societies stronger, and of female solidarity.

“The most famous thing I’ve ever said, which ended up on Starbucks’ cups, is ‘there is a special place in hell for women who don’t help each other,’ and that came from my own experience,” she said.

She also reflected on mistakes made when she was serving in the Clinton administration, especially in Rwanda. Recent events had made the U.S. reluctant to act quickly, and the genocide happened very quickly, she said.

“Rwanda weighs heavily on my mind,” she said. 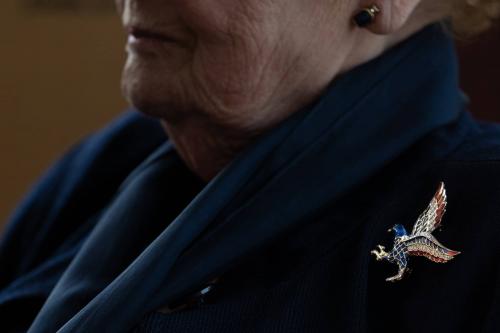 Kelley asked Albright to explain how she became known for using costume jewelry, her pins, as a diplomatic tool. At the end of the Gulf War, when as ambassador to the United Nations she was charged with implementing sanctions and criticizing Saddam Hussein, there was a poem published in Iraq calling her a snake.

“So I decided to wear a snake pin whenever we talked about Iraq,” she said.

It was a way to add a bit of humor to often tense situations. The press picked it up and wearing pins to reflect on the day’s events or make a subtle comment became Albright’s signature move.

Her pin diplomacy became so famous that she wrote a book, Read My Pins: Stories from a Diplomat’s Jewel Box, and the Smithsonian exhibited pins from her collection. Albright wore an eagle pin for the lecture.  At the end of the talk, Kelley presented her with a Duke University pin to add to her collection and mark the occasion.

Secretary Albright’s talk was presented by the Sanford School of Public Policy and co-sponsored by Duke’s Program in American Grand Strategy.