The Sanford School of Public Policy recognized 298 graduates from four different degree programs during ceremonies May 12.

During the morning ceremony, the Sanford School awarded diplomas to 64 Master of Public Policy graduates, 40 Master of International Development graduates from 22 countries, and seven PhD graduates. During the afternoon, 187 undergraduates received their degrees.

Dean Kelly Brownell presided over the graduation events for the last time; he is stepping down as dean on July 1. 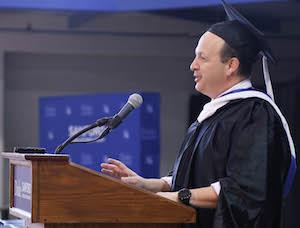 “You only make a difference when you make a decision,” said Peter Kant MPP’96.

Kant was the Distinguished Alumnus Speaker for the graduate ceremony on May 12. Kant is the vice president for federal partnerships at SRI International, a nonprofit research development institute, which helped create the iPhone’s Siri.

In an address that was both self-deprecating and serious, Kant urged graduates to go into public service, which he described as both satisfying and terrifying. There are no perfect decisions, he said, and if you think you have one, “you haven’t done your homework.”

“The difference between an analyst and leader is the willingness to make that decision,” he said.

Several MPP students were recognized for service and achievement in a separate event for MPP family and friends on May 10.

Kerry Condon was the MPP Outstanding Student. A leader of the Sanford Board Leadership Initiative, Condon sat on the board of the Ellerbe Creek Watershed Association. She was active in Sanford’s Women in Policy group and tutored fellow classmates.

After graduation, she will work as a special assistant to the president of Paul Quinn College, Michael Sorrell MPP’90/JD’94. 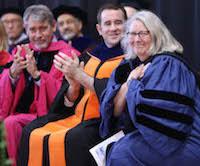 Catherine Admay, lecturer in public policy, was honored with the 2018 Richard Stubbing Teacher/Mentor Award for her work with graduate students.

The award recognizes outstanding contributions to the graduate programs of the school and deep commitment to the personal and professional development of graduate students.

Seven PhD candidates were recognized and six were hooded by their mentors during the ceremony. 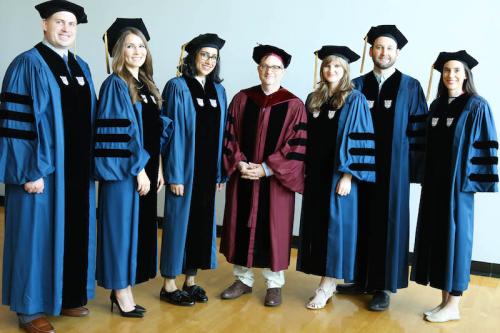 There were three September 2017 PhD graduates.

Amy Kramer was the student speaker during the afternoon ceremony. Kramer, a Robertson Scholar and ROTC cadet, has been named a Schwarzman Scholar, which will fund a year of study in Beijing, China.  She also won the Ole R. Holsti Award in American Foreign Policy and International Relations from the department of political science.  Her public policy honors thesis examined the differing impacts of male and female leaders in ROTC programs around the country.

She spoke about how studying public policy helped prepare her for unexpected twists and turns. When her visa did not come through in time for her planned internship in Germany, she was left scrambling. But she came up with an alternative, and interned at Fort Knox. She presented her thesis research to several generals.

Maura Smyles was named the Joel Fleishman Distinguished Scholar for highest academic achievement in public policy studies. She has also received a Fulbright scholarship to study the impact of a new paternity leave policy on gender roles in Madrid, Spain.

In a year when 30 students completed an honors thesis -- a record number -- Blaine Elias won Best Honors Thesis. Her research topic was “To Seek or Not to Seek: Examining Health-Seeking Behaviors Among Ethiopian Immigrants in the United States.” 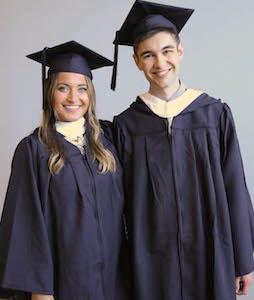 As president of the Duke Democrats, Beyer led the voter registration drive on campus, personally registering almost 1,000 people. He also worked to have an early voting site on campus in 2016.

He also worked at The Chronicle for four years, as a reporter and as the digital strategy director.

During her sophomore year in high school, Monetta’s best friend committed suicide. She decided to make a film by teens, for teens, about depression, suicide and getting help. After seven years, the film that she wrote and directed, “Not Alone,” was finished.

She screened it on the Duke campus in the spring of 2017.

This year’s Susan E. Tifft Teaching and Mentoring Award was presented to Nicholas Carnes, assistant professor of public policy. The award is named for the late Susan Tifft, the Eugene C. Patterson Professor of the Practice of Communications and Journalism, and recognizes excellence in undergraduate teaching.

Sanford's Graduation - Behind the Scenes