Luckily, their memories merge pretty well from there.

August recalls meeting Emily during a pre-orientation MPP gathering at the Geer Street Garden’s outdoor picnic tables. He recalls seeing her for the first time and making a strategic point to sit directly across from Emily in an effort to immediately talk to her. Emily says she remembers his confidence. 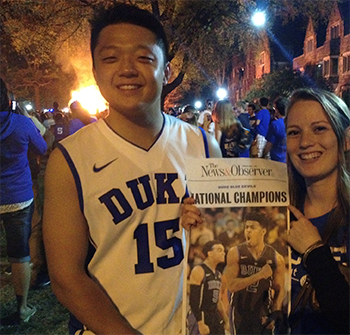 They also remember a happy hour at The Federal around two weeks later. August, perhaps aided by liquid courage, finally formally asked Emily out on a date.

“I really need help with my quant homework, can you help tutor me over dinner?” August asked.

The pair went to Saki Bomb, where August fessed up that while the initial pick-up line was a cover up for a date, he in fact really did need help with his economics and statistics classes.

The rest, as they say, is history.

The pair has conquered problem sets together, navigating the post-Sanford workforce, rescheduling and ultimately downsizing a wedding during the COVID-19 pandemic, and are in the process of training their new Doberman and Labrador mixed puppy, Winston.

Though their paths ultimately merged, both walked different paths to Sanford.

Emily’s journey was more linear. After completing her undergraduate degree in psychology and criminal justice at Temple, she worked in the research field. She originally thought about getting her PhD, but ruled it out — teaching did not appeal to her. A co-worker mentioned policy school and she became hooked on the idea.

“As soon as I read the description on the internet, I'm like, this is exactly what I want to do,” Emily said. “Take research, put it into action, make decisions, and it was sold right then and there.”

August got his first taste of the policy world serving as a legislative director for an Assemblyman in his native California after graduating from UC San Diego with a degree in political science. Still, he didn’t know exactly what he wanted to do, and ended up completing a stint in Hollywood. Only problem?

“I quickly realized I sucked at acting,” August said with a laugh. “It was not the thing for me.”

(To his credit, he does indeed have an IMDB page.)

He thought about law school or getting his MBA, but public policy “stuck out to him.” Though he wasn’t sure exactly sure what he wanted out of an MPP, he made the decision to attend Sanford.

The couple leaned on each other for emotional and quantitative support during their program.

August, who admits economics and statistics were not his strong suits, said Emily’s knowledge and tutoring was essential to his passing the first-year quantitative hurdle.

Emily pointed to the fact that she could “100 percent trust” August and relied on the fact he knew exactly what she was going through.

Like before coming to Sanford, their career paths differ in linearity.

Her internship was converted to a full-time gig. Currently, she works as a senior analyst in homeland security and justice issues.

She is part of a small team that examines federal agencies through qualitative and quantitative measures. Her work involves regular congressional briefings, as well as a written report sent to Congress.

“I love that I get to view how federal programs are working first-hand,” Emily said. “For one report reviewing the Bureau of Prisons' drug treatment program, I've visited three different federal prisons and residential reentry centers, otherwise known as halfway houses.”

August, who had a strong interest in consulting while at Sanford, moved to DC with Emily after she accepted the post-grad full-time job with GAO. His strong networking skills landed him a job with Booz Allen. He grew interested in the tech sector and now works at Salesforce as a principal portfolio manager.

“It's a much more windy road for me, because I had no idea what I wanted to do when I got to Duke,” August said.

He oversees Salesforce’s enterprise-level portfolio, which contains more than 1,500 nonprofit-based customers. His work focuses on advising C-level clients and managing a team of Salesforce experts.

“I wake up every day and am empowered by the idea that I have the opportunity to provide powerful technology to organizations devoted to tackling our world's biggest problems,” August said. “It's the dream job that I never knew existed when I was at Duke.”

After settling into DC life finally, the couple became engaged and started planning a wedding for Dec. 5, 2020, at the Peabody Library in Baltimore. Though the COVID-19 pandemic forced them to cancel the larger nuptials, they were able to stop planning early in the process.

“Fortunately, we weren't that far along in the wedding planning process when the pandemic hit,” Emily said. “We had our venue, we had our photographer. And then when everything started shutting down, we just we stopped planning,”

The couple opted for an elopement on Dec. 13, 2020. Instead of a larger wedding, they spent the day with a small team of photographers and videographers. They took pictures at an empty Capitol and eloped at the nearby National Arboretum.

Although they had to cancel their initial larger ceremony, luck was in their favor. A previously grim forecast turned into a rare 65-degree December day. The pictures at the empty Capitol are gorgeous.

Less than a month later, they also realized how fortunate they were not to put off the photos when the Capitol area was largely shut down due to the insurrection and riot.

“It almost felt like wow, if we had waited a month to do it… We feel very fortunate about (taking the pictures when we did),” August said.

Both have been working remotely since the pandemic’s onset, time they are grateful for.

“It's been awesome, and what we consider as a one year honeymoon where we get to spend everyday together,” August said.

The couple still socializes with their many Sanford peers in DC, often participating in Zooms or watching Duke basketball games together.

In August they introduced a new member to the family: Winston, a puppy.

They also are looking forward to having a larger gathering to celebrate their marriage.

“We plan to have a big party, but we're just not gonna plan it until, you know, people can interact with each other,” Emily said. “So whenever it's safe, then we'll start planning.”