Rev. Barber Calls for Action to ‘Save Our Ship of State’

“Forward together,” the preacher said, and “Not one step back!” the crowd roared back. With the signature call and response of the Moral Movement, Rev. Dr. William Barber II began a speech Tuesday at Duke University that was a combination of history lesson, social and political commentary and sermon.

“I want to talk about SOS, saving our ship of state,” he said.

Barber delivered the Terry Sanford Distinguished Lecture and the Boyarsky Lecture in Law, Medicine and Ethics in Page Auditorium on Feb. 20. Barber is the former president of the NC chapter of the NAACP and the current president of Repairers of the Breech, which is reviving Dr. Martin Luther King’s Poor People’s Campaign.

Not a Matter of Statues, but Statutes

After the “rejection election of 2016,” Rev. Barber said that the conversation about racism in America has become confused, especially after the events in Charlottesville have confused the racism of personal feeling vs policy, that racism in not just a matter of “statues, but statutes.”

On the same day that remaining charges against the Durham protestors who pulled down a statue of a Confederate soldier were dismissed, Barber pointed out that the statue at the center of the Charlottesville protest was erected in 1919. Its purpose was “not to pay homage to the Civil War,” but to mark the election of Woodrow Wilson, a white supremacist, who had members of his administration watch “The Birth of a Nation,” a movie based on a book called The Klansman by a North Carolina author.

He drew connections between the election of Rutherford B. Hayes, who ended Reconstruction “in 1877 after losing the popular vote and losing the presidency, was awarded it by the Electoral College,” and the Southern Strategy of Lee Atwater in 1968.

Atwater proposed ways to talk about states’s rights instead of race, to use code words to split people and get them to vote against their own interests. Extremists knew if they had a coalition of 13 states that they would control 28 Senators and 30 percent of the House, and could gain power by winning just a few other states.

Barber is president of Repairers of the Breach and co-chair of the Poor People’s Campaign: A National Call for Moral Revival, a coalition of organizations fighting to end systemic racism, poverty, the war economy, environmental destruction and other injustices.

“The problem is not Trump,” Rev. Barber said, “but that Trump had an audience that had been cultivated for 50 years.”

“These are symptoms of a deeper moral malady. Systemic racism at its heart is a dislike of democracy,” he said. “The great underreported story [of the 2016 election] that no one wants to talk about is voter suppression.”

He cited 868 fewer voting sites in black communities and 22 states engaged in voter suppression in the four years since the U.S. Supreme Court struck down parts of the Voting Rights Act.

“They wouldn’t have the presidency or the Congress or the General Assembly without voter suppression,” he said.

The same states that have experienced attacks on voting rights have passed policies that hurt poor people, blacks, immigrants and LGBT people. “That’s the trick and the hook,” he said.

He then turned to the “heretical work of Christian nationalists and white evangelicals,” who have given Trump a “mulligan” on personal infidelities. “What is heretical is the use of religion to cover up his immoral and pornographic policies. When it comes to public policy, no one should be given a mulligan,” Barber said. “Public infidelity is not a private matter and it should be challenged in the public square.”

Paraphrasing Ezekiel 22, Rev. Barber said that “politicians have become like wolves and prey upon the people, but a worse sin is for the preacher to cover it up.”

“There are people running for office now saying, ‘I’ll take away your health care while you pay for mine,’ and people buy it because they think the politicians are talking about those other folk,” he said.

The poor have been made poor by economic oppression, and “Woe unto to those who legislate evil.”

"Their God is Cash, Not Christ"

The heretical form of Christian nationalism has its roots in the 19th century and those who used religion to justify race-based slavery and people paid to preach a predatory form of Calvinism, he said. “They are showing us their god is cash, not Christ.”

This combination of racism, classism and distorted moral views has resulted in policies that prevent cities from passing their own minimum wage laws, in undermining poverty programs resulting in a 60 percent increase in poverty since the 1960s, in increased deportations of immigrants and a country with 2 million more people in jail than China, Barber said. 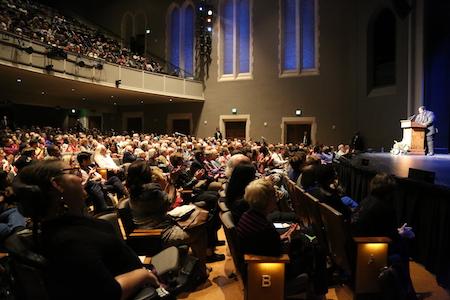 It results in environmental injustice, where “poor people can buy unleaded gas but not unleaded water.”

It creates policies where it is “easier to get an assault weapon than a fishing license.”

It allows a “war economy” where 53 cents of every tax dollar goes to the military.

“It’s not the money we don’t have, but the moral will to do right,” Barber said.

He identified five interlocking maladies that the country is suffering from: systematic racism, systemic poverty, environmental abuse, the war economy and the moral crisis of the distorted moral view of white nationalists.

The way out of this moral malady for America is to link together.  “America is in the middle of the possibility of another reconstruction,” if we come together.

“There must be a moral revival, a political Pentecost, where black, white, gay, straight, Christians, Muslims and Jews, come together to speak in new tongues,” he said. The movement should be rooted in love and truth, he said.

He outlined a number of policies that the movement should pursue, such as automatic registration at 18, a living wage, and universal healthcare.

He cautioned against despair. “Don’t tell me it’s the worst ever seen – that is an insult to the slaves, to Holocaust survivors, to the women who marched for voting rights, to the LGBT community.”

The Rev. Barber ended with a call to action, saying he was looking for 1,000 people in 25 states to help with the moral movement.

“It’s time to save our ship of state, to dare to shift the narrative, declare the future yet to come. It’s time that we chose not to be silent, not to be content, we chose to change the heart of this nation.”