A Duke team’s research on slums in Bengaluru (formerly, Bangalore) and two other India cities with large, growing populations is drawing attention from policymakers and the national press. Their findings have significant implications for urban poverty programs.

Anirudh Krishna, professor of public policy, and Erik Wibbels, professor of political science, together with Emily Rains, a Sanford PhD student, began the project in 2010.

Over a seven-year period, the team used satellite images to identity slums that were not included on the official lists. Researchers started with an initial sample of 14 slums from the government list, but soon identified dozens more.

“New slums are forming, older ones are expanding and mutating -- spreading both horizontally and vertically -- slum names and slum boundaries keep changing,” Krishna said, as reported by The Times of India.

Slums that are not included on the official lists are not eligible for government services, and their residents are often left out of official surveys and population counts. Undercounting – a result of outdated surveying methods – results in widespread suffering and loss, Krishna says.

The research team presented its findings July 23 at a public workshop at the Indian Institute of Management-Bangalore, a leading graduate school of management in Asia. The Hindu and the Economic Times also reported on the event.

The team interviewed more than 4,500 slum residents, both in the newly identified slums and the officially listed ones, and uncovered a continuum of living conditions. In the worst-off slums, people live under hastily erected blue tarps with mud floors, while the best-off slums consist of three-story concrete buildings. In the poorest encampments, residents have no access to water or electricity. In older, officially listed slums, people live in better buildings, most with piped water, private toilets and electricity.

The data also showed that slum residents have very little upward mobility. Seven of 10 families remained slum-dwellers for four generations. Further, it showed that when residents did move, it was usually a move down the continuum, to a poorer area.

Krishna has presented the findings to policymakers in the past, including to the chief economic advisor to the Indian government and to officials of the state governments of Rajasthan and Karnataka, where Bengaluru is located. The findings were well received, he said.

“We have recently received inquiries from two other state governments,” he said.

While no policy changes have yet resulted from the research, Krishna believes it is only a matter of time.  He expects to see changes tied to the methods pioneered in the study, such as using satellite image analysis combined with field surveys to produce more accurate inventories, as well as policies tailored to the different types of slum conditions.

In addition to support from the Omidyar Network, the research has been supported by the Jana Urban Foundation. The Digital Globe Foundation donated the high-resolution satellite imagery used in the project.  The research was carried out in collaboration with a number of academic institutions in India, including IIM Bangalore, the Indian Space Research Organization, ADRI (Patna) and IDS (Jaipur).

Other students involved with the research include Jeremy Spater, a PhD student in political science, who co-authored with Rains the policy briefs presented at the conference, and Hart Fellow Grady Lenkin PPS’14. Lenkin worked on developing the methodology for the project. 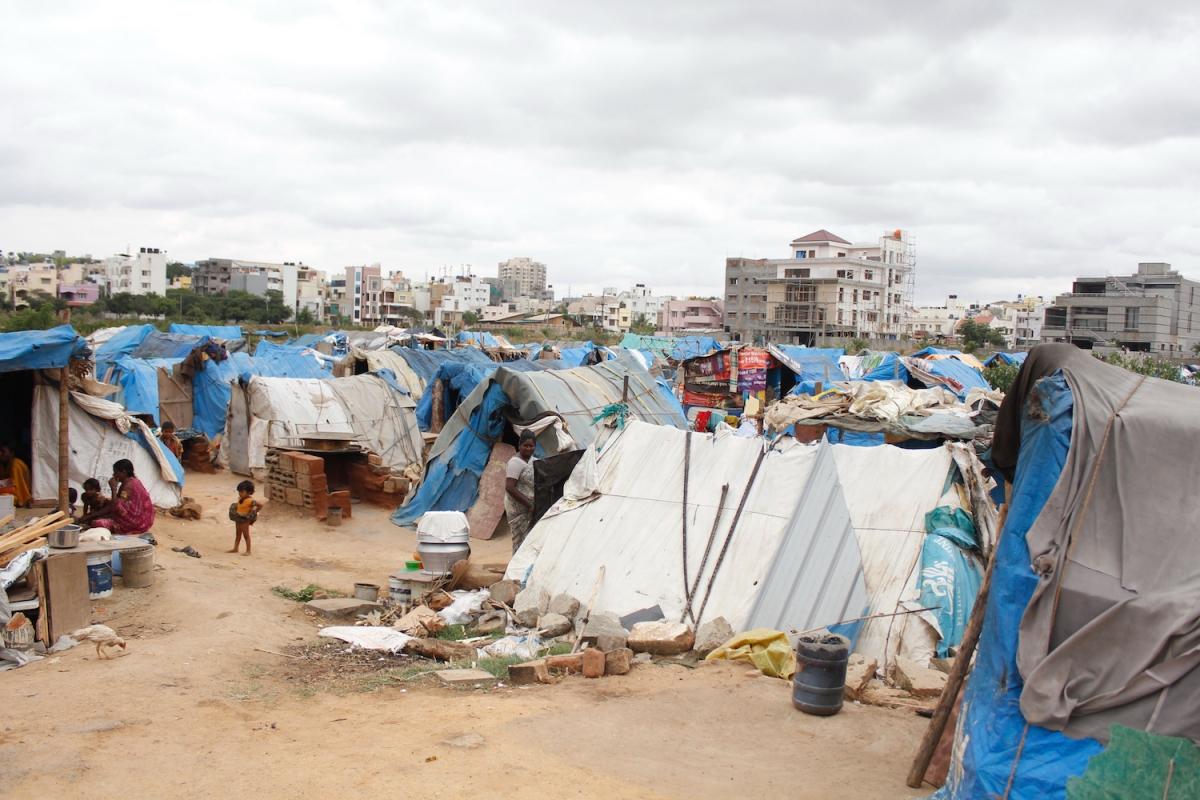 Over the summer, Anirudh Krishna began to see some of his other groundwork in India begin to pay off. In July, about 35 groups from across the nation gathered at the Indian Institute of Management-Indore to form a national nonprofit federation.

The groups all work in different places and ways to promote social mobility – helping smart, hardworking young people from backgrounds of poverty reach their potential. But they were not in touch with each other, Krishna said. “They don’t exist in any directory,” he added.

Two years ago, a research assistant identified 50 organizations that in different ways give a leg up to poorer children. Some help with college preparation. Others provide mentoring, career counseling or supplementary education. Krishna began visiting them, one by one, to study their methods.

Along the way, he had the idea to form a national coalition. Most were interested, and a core group was able to begin organizing. That foundational work led to the larger gathering this summer where participants chose an interim governing council. Members are pushing ahead to raise money, hire staff and register the national organization.

Krishna hopes the new national organization will help mainstream and scale up social mobility efforts. Currently, they support about 100,000 children annually in India, but many millions of young people need these supports.

“Being poor is a heavy burden that crushes you. Even if you are smart, you are not able to see clearly the road from where you are to where you could go. This is one of the biggest problems of poverty.”

While it is beneficial for people to go from unemployment to working, for example, as a bellhop or a taxi driver, all of society is worse off when people who could do more complex work don’t get the chance, Krishna said.

“This is a part of poverty reduction that’s not being addressed. That’s what attracts me to these organizations. They’re working on the neglected but hugely important area of promoting social mobility.”

“This the most rewarding thing I have done,” Krishna added.