James Vaupel, a leading theoretical demographer in the field of aging and one of the first professors hired in the university’s public policy program, passed away on March 27.  He was a research professor in public policy at the Duke Sanford School of Public Policy. He was 76.

Vaupel was hired by Joel Fleishman in 1972 to teach in the new Institute of Policy Sciences and Public Affairs, which evolved into the Sanford School of Public Policy. He created many of the courses that form part of the core curriculum of the undergraduate major, including Analytical Methods for Public Policymaking and Policy Choice as Value Conflict and taught how to apply quantitative skills to policy problems.

In those early days of the program, Vaupel thought that students should learn certain skills. 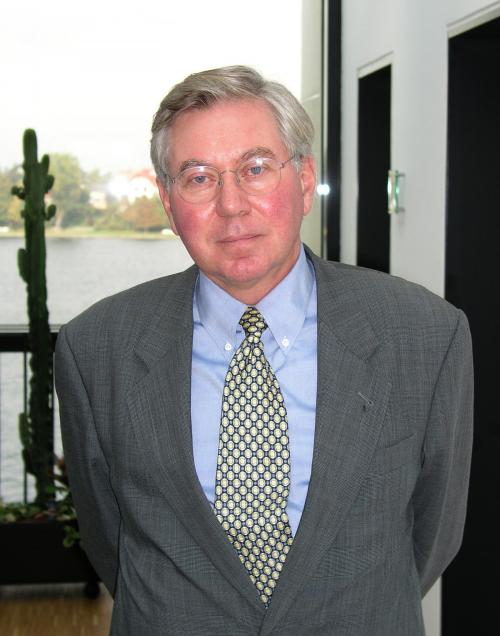 “Jim was a critical contributor to the enterprise that became the Sanford School.  Even before he developed his scholarship as a world-class demographer, he created the foundational introductory course in public policy, PPS 55, where his charismatic teaching filled the lecture hall in Old Chem to the point where it overflowed, giving coherence to a developing idea, ensuring its survival during the early stages of its growth, and making public policy one of the most popular majors in the university,” said Bruce Kuniholm, dean emeritus of the Sanford School.

“We will always remember him as a unique human being, full of vibrant energy and life, with his expansive mind constantly working, entertaining almost any subject, periodically interrupted only by his sense of humor, the twinkle in his eye and his love of life,” Kuniholm said.

Vaupel’s research focused on aging and demography. He expanded the field by taking a multidisciplinary approach, combining biology, mathematics, economics and public policy. He was a leading proponent of the concept of the plasticity of longevity, especially on mortality improvements at the end of the lifespan.  His research indicated that human life span is not fixed, but a function of life expectancy and population size.

Vaupel received a bachelor’s degree in mathematical statistics and and a master of public policy degree at Harvard University. He also earned his PhD in public policy from the Harvard Kennedy School of Government.

“Jim arrived at Duke in 1972, right out of graduate school, and tasked with helping invent something new to academia, a stand-alone major in public policy,” said Philip J. Cook, professor emeritus of public policy.

“He was a star teacher and a sparkling intellect that inspired everyone around him.  He went on to be the leading theoretical demographer of his generation, but he never lost his interest in public policy, and insisted that demography was a foundation of policy analysis.  He will be greatly missed by colleagues around the globe,” said Cook.

Throughout his career, he pushed to make demographic knowledge available to students, the public and policymakers, though projects such as the interdisciplinary network, MaxNetAging.

“While he may not have been physically present among us often in recent years, Jim’s legacy of life-giving intellectual questioning, joy in continuing discovery and spirit of fun continue to help make Sanford the truly joyful and enlivening community that his example inspired us to become,” says Joel Fleishman, professor of law and public policy.