It’s hard for families with kids to save money. In the U.S., it’s even harder when the family is black, a new study finds.

The findings highlight ongoing economic disparities at a time when protests over racial injustice are again sweeping the country.

In 2016, black households with children had only one penny of wealth for every dollar held by their white counterparts, according to the new study co-authored by a Duke researcher that examines the relative wealth of black, white and Hispanic families.

Hispanic families had 8 cents for every dollar of wealth held by white families with children in that year.

“Our study provides one of the first estimates of the extreme wealth inequality across racial/ethnic lines among households with children,” said Christina Gibson-Davis, professor of public policy and sociology at Duke University.

The study was co-authored by Christine Percheski, professor of sociology at Northwestern University.

The Great Recession affected black households with children more severely than similar Hispanic or white households. The impact from the coronavirus pandemic could be even more devastating, she says.

Wealth, defined as assets minus debts, is critical to the well-being of children. A family’s wealth shapes a child’s educational and employment opportunities, and family choices, such as getting married. It provides a cushion from unexpected events, such as job loss or medical debt.

“It’s no surprise that black families were hit harder by the Great Recession, when they had almost no wealth, no cushion,” said Gibson-Davis.

The study drew on data from the Survey of Consumer Finances from 2004 to 2016.

The researchers defined a child household as one that contained at least one member under the age of 18, in which the household head self-identified as non-Hispanic white, non-Hispanic black or Hispanic.

They examined the assets and debts -- including home ownership and education debt -- by race, ethnicity and year.

“Wealth is central for child well-being, for acquiring education and skills, and for their outcomes later in life. We also know that most children will have the same wealth position as their parents,” said Gibson-Davis. “Any child -- black, brown, or white -- who grows up without a lot of wealth is likely to have low wealth as an adult.” 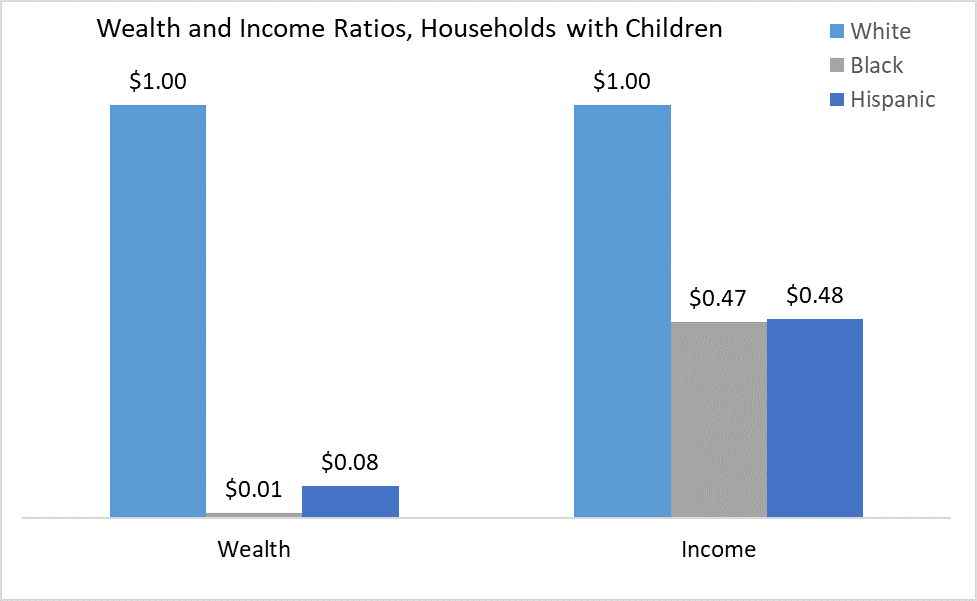 “We don’t think about policies for wealth building in the U.S. Most of our policies are income focused,” said Gibson-Davis.

The wealth levels of Hispanic households with children relative to similar white households remained about the same over the time period.

The researchers found that black households with children did not regain lost wealth after the Great Recession, but instead lost wealth at all income levels. Even those in the top percentile of wealth regained only about half of their 2004 level of wealth by 2016.

Home ownership rates among black households with children declined by nearly one-fifth in the aftermath of the Great Recession.

Home ownership and education debt contribute to the gap, but can’t fully explain the decline.

There are a number of possible policy solutions that can address the gap, including targeting discrimination in housing and mortgage markets, addressing racial residential segregation and removing inequity in financing higher education researchers said.

“If you are already 99 cents behind, you can’t catch up just with a better income. Whatever policies are considered, they can’t just be piecemeal,” said Gibson-Davis.

The study, “A Penny on the Dollar: Racial Inequalities in Wealth among Households with Children,” by Gibson-Davis and Christine Percheski, professor of sociology at Northwestern University, was published by the journal Socius: Sociological Research for a Dynamic World on June 1 at https://doi.org/10.1177/2378023120916616.  This work was supported by the National Science Foundation (award 1459631).