Despite the divisive nature of U.S. politics, bipartisanship is still alive and well, according to two U.S. senators who spoke at the Sanford School of Public Policy’s annual “Sanford on the Hill” event at the U.S. Capitol Visitor Center on July 17.

Duke alumni of all ages, distinguished guests, and other District professionals gathered at this year’s event, which was co-sponsored by POLIS, Duke’s Center for Political Leadership, Innovation, and Service; Sanford Development; and Sanford Alumni Affairs.

The evening featured a discussion between Senator Shelley Moore Capito, a Republican from West Virginia and Duke ’75 alum, and Senator Maggie Hassan, a Democrat from New Hampshire, on the challenges and successes of bipartisanship in the current political era. Professor Frederick “Fritz” Mayer, associate dean for strategy and engagement at the Sanford School and director of POLIS, moderated the discussion.

The senators cited a list of successful bipartisan legislation they had each sponsored, including work on eating disorders and veterans’ affairs. Capito noted that Hassan made an appointment with her office shortly after being elected to get to know one another and to discuss potential cross-party collaboration. 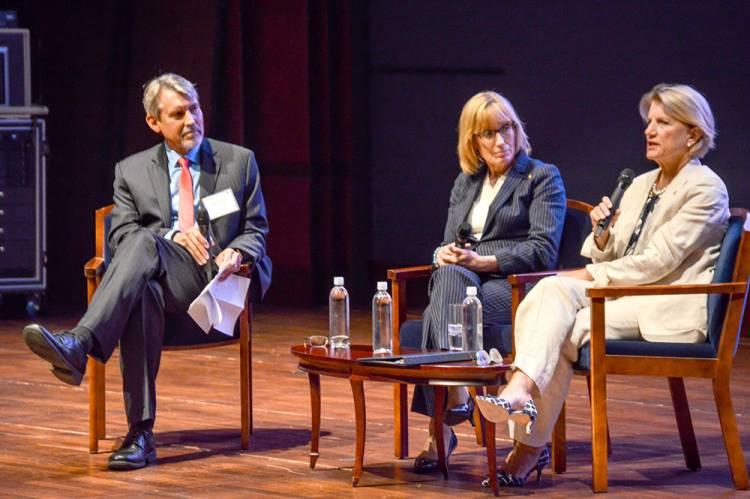 “The foundation of civility is not about avoiding arguing,” Hassan said.  “It’s about not questioning the motives of someone else.”

The two senators also discussed the necessity of diversity in elected office.

“Twenty-one women currently serve in the United States Senate,” Capito said. “In its history, there have only been 50, and I’m number 45.”

Capito noted that women in the Senate have a history of civility, attending a monthly dinner with female colleagues, a tradition started by former Maryland Senator Barbara Mikulski.

“The more variety you have in a decision-making body, the better decisions get made,” Hassan said. “We were founded on this principle that every person counts. Every generation is supposed to engage in the mission of creating a more perfect union.”

Mayer said that the discussion served as a reminder of what politics can—and should—be.

"At a time when all we hear about is divided and dysfunctional politics, Senators Capito and Hassan were an inspiration, reminding us that that there are still public servants working hard to do the best for our country,” Mayer said. “For POLIS, they were a perfect example of the politics we are working to revive, a politics where we can disagree without being disagreeable, listen respectfully to others who think differently than we do, and work together to find common ground.”