Policy Impact: 10 Ways Sanford Faculty Research Has Made a Difference

Sanford became a school on July 1, 2009, so this fall we're marking the 10th anniversary as a school. Previously, Sanford was organized as an interdisciplinary institute.

Becoming a school raised Sanford’s profile and helped spark exciting changes and growth. To mark the occasion we’re sharing a series of stories about the last 10 years.  In this third and final story, we share a small sample of the ways in which Sanford faculty's timely and relevant work is informing policymaking. 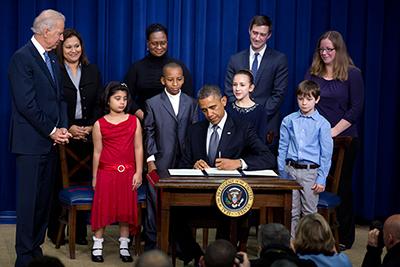 In 2014, Philip J. Cook and Kristin Goss co-authored “The Gun Debate: What Everyone Needs to Know.” U.S. Rep. Robin Kelly (D-Ill.) drew heavily upon the book for her report, 2014 Kelly Report on Gun Violence in America (updated in 2018), which recommends legislative and policy actions at federal and state levels. In the aftermath of Sandy Hook, President Obama cited Cook’s research (with co-author Jens Ludwig) when announcing his plan for reducing gun violence. Hours after the president’s announcement, Cook and Goss took part in a conference call with N.C. legislative delegation staff in D.C., discussing the issues and White House proposals.

Director of Nicholas Institute for Environmental Policy Solutions Tim Profeta, an associate professor at the Sanford School, testified Thursday, Dec. 5, 2019, before the House Subcommittee on Environment and Climate Change of the Committee on Energy and Commerce. He proposed a comprehensive federal/state partnership to achieve fast and significant action to address the urgency and scale of climate change. His testimony drew on his research, leadership of the nonpartisan policy institute and experience as a environmental law advisor on Capitol Hill.

Decades of research on race-based income inequality by Professor William Darity Jr. have been part of the national policy conversation since at least 2018. These ideas include “baby bonds” (taken up by presidential candidate Sen. Cory Booker), a federal jobs guarantee (endorsed by Center for American Progress and others) and reparations for descendants of slaves. Darity was invited to testify to a House Judiciary subcommittee on June 19, 2019 and submitted his written testimony about reparations.

Bruce Jentleson received the 2018 Joseph J. Kruzel Memorial Award for Distinguished Public Service in honor of his scholarship and years of public service. From 2009-2011 he was senior advisor to the U.S. State Department Policy Planning Director; in 2012 he served on the Obama campaign’s National Security Advisory Steering Committee. His public service goes back to the late 1970s, when he was a foreign policy aide to Sen. Dave Durenberger. He also has served on a number of policy commissions, including the Responsibility to Protect (R2P) Working Group co-chaired by Madeleine Albright (2011-13).

Drawing on her research into the effectiveness of U.S. efforts to reduce human trafficking, Judith Kelley advised Rep. Chris Smith (R-N.J.), a key sponsor of related legislation. She also briefed then-Ambassador at Large Susan Coppedge (a Duke Sanford alumna) in the Office to Monitor and Combat Trafficking in Persons in the U.S. Department of State. Her office used Kelley’s book, "Scorecard Diplomacy," to help justify a request for continued funding to fight human trafficking worldwide.

In partnership with Common Cause, Polis: The Center for Politics hosted a two-day conference in January 2019 on redistricting reform. Approximately 300 people attended. Previously POLIS worked with former UNC System Chancellor Tom Ross to create a mock redistricting panel, made up of a bipartisan group of former N.C. judges and Supreme Court justices, to show the potential for nonpartisan redistricting commission. The panel’s maps were discussed by the General Assembly as it redrew districts in the fall of 2019.

Scores of DCID consulting activities have influenced policy in developing nations. For example, in 2010 and 2011, Roy Kelly led a team of Nepali researchers to conduct a Fiscal Decentralization study. As input to the new federal-based constitution, this study identified the extent to which the Local Self Governance Act (1999) had been implemented. In 2011, Gangadhar P. Shukla and Sandeep Bhattacharya proposed fiscal policy measures for stemming environmental degradation and water, air, and noise pollution for the Government of Thailand. In 2013, Graham Glenday, Bhattacharya and Kelly also produced a Reform Action Plan for the overall tax system in Guyana for the Office of the President.

Ken Dodge led the creation of Durham Connects in 2008 and a larger program that grew out of it, called Family Connects International. The research-based, universal nurse home visiting program for newborns aims to prevent child abuse. The program has been shown to reduce usage rates of child emergency medical care through the child’s first two years of life. The state of Oregon established a Universal Home Visiting program modeled on Family Connects.

Based on research in in Peru, Kenya, Uganda, India and Durham, N.C., Anirudh Krishna developed the Stages-of-Progress model to measure movement into and out of poverty. His work has helped shift thinking globally about poverty interventions. Instead of focusing only on helping people out of poverty, some NGOs, especially in Canada and Great Britain, have begun developing programs to prevent people from becoming poor in the first place.