Children of incarcerated parents are six times more likely than other children to develop a substance use disorder as adults and nearly twice as likely to have diagnosable anxiety, according to new research from the Center for Child and Family Policy at the Duke University Sanford School of Public Policy. 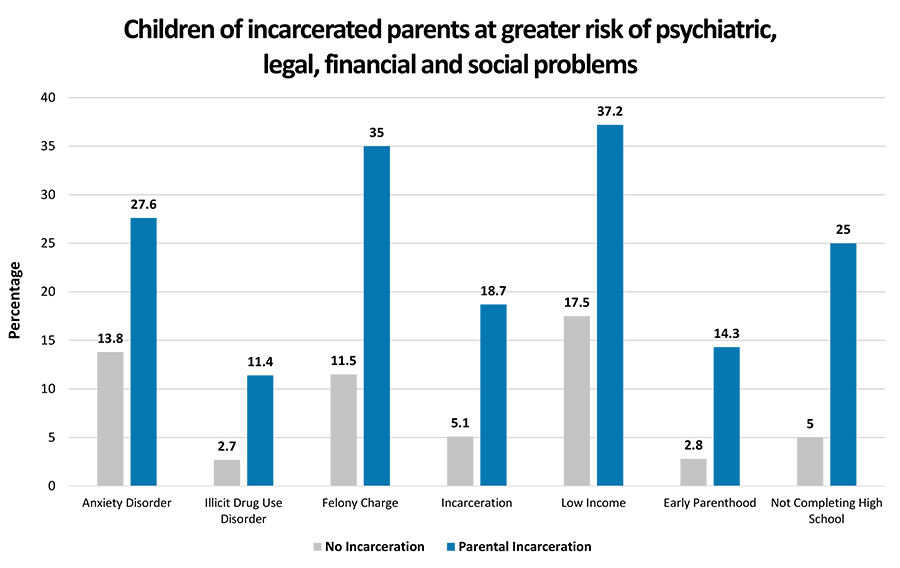 “The increased risk for adverse adult outcomes remained after accounting for childhood psychiatric status and other adversities, suggesting that parental incarceration is associated with profound and long-lasting effects for children,” said co-author William E. Copeland of the University of Vermont, who conducted the research while at Duke. “This increased risk persisted whether the incarcerated parent was biologically related to the child or not. Risk for adverse adult outcomes increased further with each additional incarcerated parent figure.”

The United States has the highest incarceration rate in the world. The U.S. Department of Justice estimates that more than half of those who are incarcerated are parents of children under age 18. With more than 2.7 million children experiencing a parent being sent to jail or prison, understanding the long-term health and social implications of incarceration for children is critical, the researchers say.

The study was published Friday in JAMA Network Open. Lead author Beth Gifford of Duke University and Copeland, principal investigator for the Great Smoky Mountains Study, along with colleagues from Duke, the University of Vermont and the University of Zurich, analyzed study data gathered between 1993 and 2015 on the life experiences of children from the Appalachian Mountains in western North Carolina from age nine until age 30.

Researchers considered all adults who had significant responsibility for the child’s discipline or care to be “parental figures.” They also interviewed families as many as eight times during childhood. Using those methods, researchers identified a higher prevalence of incarceration by parental figures (23.9 percent) than the 8 to 11 percent documented in previous population-based studies.

“Our findings point to the potentially high societal costs of incarcerating children’s caregivers -- potentially for generations to come,” said Gifford. “From a public health perspective, preventing parental incarceration could improve the well-being of children and young adults, as could aiding children and families once a parent figure has been incarcerated.”