Lisa Monaco, former assistant to the President Obama for homeland security and counterterrorism, praised the Trump administration for making progress on North Korea and the fight against ISIS during a talk Wednesday at the Sanford School of Public Policy.

In recent days, the United Nations Security Council took action against North Korea, adding sanctions in an attempt to induce it to negotiate. Monaco credited the unanimous vote to U.S. leadership. North Korea and its nuclear aspirations had posed a big foreign policy and security challenge during her time in the White House, she said.

“I and others have used words like [Kim Jong Un]’s unhinged,” Monaco said. “The fact of the matter is he is exceedingly paranoid and indescribably violent -- but he’s rational.”

Monaco, who was appointed to serve under President Barack Obama in 2013, had been a federal prosecutor and assistant attorney general. As a 2017 Terry Sanford Distinguished Lecturer, she discussed topics ranging from hurricane relief to the threat from ISIS. David Schanzer, associate professor of the practice of public policy, moderated the discussion with Monaco.

The denuclearization of North Korea is not a likely outcome, Monaco said. Deterrence should be the goal and that requires a strong military threat, though perhaps not as sharp as Trump’s “fire and fury,” she added. It also requires targeted sanctions, covert operations and collaboration with allies in the region.

Turning to the recent devastation from Hurricanes Harvey and Irma, Monaco praised FEMA’s response so far. Longer term, she said it was important to focus on implementation of recovery efforts after the disasters fade out of the news, especially in issues of housing, environmental and health issues.

“It’s going to be not weeks, not days, but months and years,” she said. 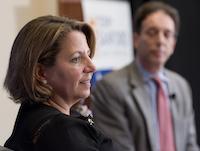 Monaco had a long career in the federal government, including several years working with former FBI director Robert Mueller to revamp national security in the wake of the Sept. 11, 2001 terrorist attacks. Her work on terrorism issues continued throughout the Obama administration even as the threats have evolved.

“I would say we’ve faced a very adaptive enemy and that’s an important distinction in my mind because it reminds us of where we need to go,” she said, referring to terrorist groups.

Although the federal government has made significant strides toward preventing major terrorist attacks since 9/11, it is more difficult to stop self-radicalized individuals such as in Orlando, San Bernardino and Charlottesville, unless they solicit foreign help. Stopping these individuals will require partnerships and innovation with the technology sector and local communities, she said, emphasizing that it will be a bottom-up effort.

Some issues, such as the Syrian conflict, proved more intractable. The challenges were incredibly complex and there were few good options for how to handle the crisis. Hard problems should be looked at in light of your values, Monaco said.

For President Obama, that meant thinking about what the top national security interests were for the United States, she said. An action had to be balanced against international law and humanitarian concerns. Monaco said she thought President Trump’s decision to launch missiles into Syria in response to the Assad government’s use of chemical weapons was a “positive step,” however such action needs to be part of a broader strategy. 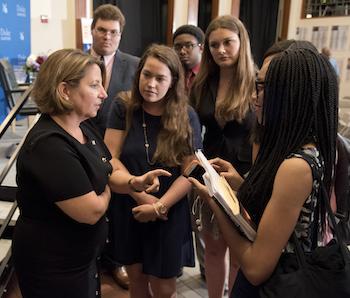 For students who may be considering careers in the federal government or public service, Monaco encouraged them to take heart.

“You are not forgetting to do something right now,” she said. “There is no one path. You’ve got to be open to opportunities that come your way even if they were outside your plan.”

Still, she noted that those questioning whether they could work in the current administration should consider what boundaries they are not willing to cross.

Monaco is currently a distinguished senior fellow at New York University Law School and a commentator for CNN.

This event was sponsored by the Sanford School of Public Policy, the Triangle Center on Terrorism and Homeland Security and the Duke Program on American Grand Strategy. The Terry Sanford Distinguished Lecture series is made possible by a gift to the university from the William R. Kenan Jr. Charitable Trust in honor of the late Terry Sanford.

This year, the Sanford School marks the Terry Sanford Centennial, a year-long celebration of the legacy of Terry Sanford, former governor of North Carolina, president of Duke University, and U.S. senator. Terry Sanford also served in the Second World War and with the FBI.