Former Fox News talk show host Bill O’Reilly could not have known he was providing the title for a book about the racial dividing lines in American media when he labeled TV critic Eric Deggans “one of the biggest race-baiters in the country.”

Deggans’ book, “Race-Baiter: How the Media Wields Dangerous Words to Divide a Nation,” came out in 2012, a year before he left the Tampa Bay Times in St. Petersburg, Florida, to cover the TV beat for NPR. Seven years later, the media biz still has plenty of work to do – and to un-do, says the award-winning critic, who will be teaching a half-credit course on race and media at Duke this spring.

On the one hand, Deggans says he sees progress in “scripted” TV dramas and comedies, which have “gotten a lot better on diversity and featuring marginalized people.” But that’s less true in other media categories – such as reality TV.

“At the core of their appeal are these stereotypes that people have about each other, and creating a show where it’s filled with characters who are are archetypes of all of those misconceptions and bouncing them off each other,” Deggans says. He also emphasizes that these “unscripted” reality shows are in fact intentionally shaped by producers and edited “in ways that play into the stereotypes that people have … good and bad.”

Social media and politics are no better when it comes to handling prejudice, especially since the 2016 election – and politically segmented cable news audiences don’t help either.

“Unfortunately the trends I highlighted in cable TV news have only gotten worse,” Deggans says.

All this will make for lively discussion and debate in the course Deggans will teach every other Thursday next semester (PJMS 290T, from 3:05 to 5:35 p.m.). And Deggans’ book will provide a springboard for those conversations. “Race-Baiter” was a byproduct of similar courses he taught at Eckerd College in St. Petersburg and the University of Tampa. For those courses, Deggans says he had to rely on a mix of articles and book excerpts.

“I was trying to talk about how race and media work together, and there was no textbook I could use,” he says. “I was cobbling together materials for my classes. … There was no book that pulled together a large scale analysis of how media and race and prejudice and stereotyping work together.” 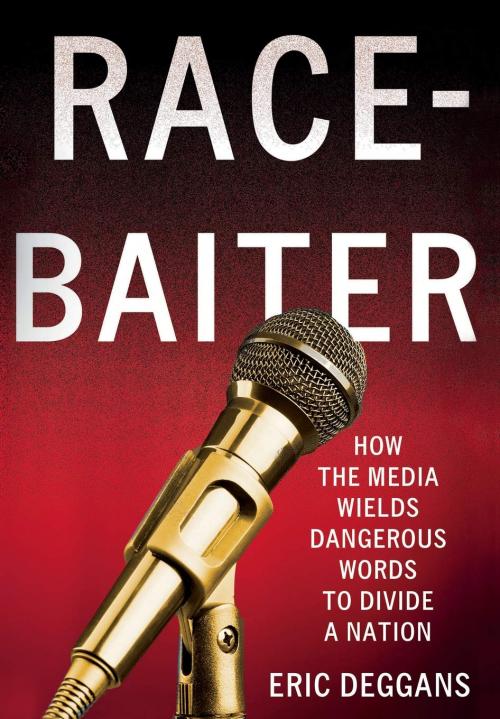 So he decided to write one. In the book, Deggans pointed out that the term “race-baiter” was historically used to label a person who verbally attacks people from other racial groups. But the description “has evolved with the times,” he wrote. “[T]hese days, the term is just as likely to be used to accuse those fighting racism of unjustly referencing the issue to win a fight.”

Deggans wrote his book while he was still a journalist at the Tampa Bay Times (known before 2012 as the St. Petersburg Times). He started at the newspaper in 1995 after earlier stints at the Asbury Park Press in New Jersey, and Pittsburgh Post-Gazette and The Pittsburgh Press in Pennsylvania. At the Times, Deggans spent two years as a pop music critic before taking on a broader beat as media and TV critic. He also spent a year on the board that writes the Times’ editorials, and wrote opinion columns under his own byline.

While at the Times, Deggans appeared frequently as a media commentator on various news outlets, including NPR. In 2013, he joined NPR as a full-time TV critic. But he also weighs in on a wide range of media content and issues, from sitcoms and comic books to political news and music. His reporting and commentary often focus on the points where pop culture and public discourse collide – such as the abrupt firing of comedian Shane Gillis for his racist and homophobic remarks just days after NBC’s “Saturday Night Live” hired him as a new cast member.

Gillis’ racism was “presented like this acceptable, understandable way of thinking,” Deggans said, after sharing a clip during an NPR segment about the firing. “We’ve seen throughout history how people have used entertainment to make stereotypes palatable and even fun, and I’m glad ‘SNL’ didn’t reward a comedian who traffics in stuff like that with such a high-profile job, especially when the show’s had its own problems with representation.”

In addition to his work for NPR, Deggans has been a media analyst and contributor for MSNBC and NBC News since 2017, where discussion topics can range from the messy intersection of comedy and politics to the way documentaries and docudramas reshape the public’s understanding of earlier news events.

Deggans’ work has been honored by the National Association of Black Journalists Arts & Entertainment Task Force, the Florida chapter of the Society of Professional Journalists (SPJ) and the American Sociological Association. He co-chairs the Media Monitoring Committee for the National Association of Black Journalists and was the first African American chairman of the board that selects the prestigious George Foster Peabody Awards for excellence in electronic media. Deggans also has served on the boards of SPJ’s mid-Florida chapter and the national Television Critics Association.

In addition to his own book, Deggans contributed a chapter to “The New Ethics of Journalism: Principles for the 21st Century,” in which he addressed similar issues through the lens of “How Untold Stories Can Reflect Diversity.”

At Indiana University, Deggans majored in political science and journalism. But he worked as a professional drummer, touring and performing with Motown recording artists The Voyage Band before he turned to the news business.

As for O’Reilly, the former Fox News host and talk radio personality who once called out Deggans for race-baiting, the NPR journalist hasn’t heard much from him since “Race-Baiter” came out in 2012. “He realized the only thing it would do was publicize the book,” Deggans says. “If you want Bill O’Reilly to get out of your hair, just write a book about him.”