Nobel Peace Prize Laureate Nadia Murad sat down with Sanford School Dean Judith Kelley on Monday to discuss her work on behalf of the Yazidi people after the attempted genocide by Islamic State (ISIS) forces.

She spoke to more than 600 people at Penn Pavilion with the assistance of fellow activist and translator Abid Shamdeen. The talk was part of the Crown Lecture Series in Ethics.

Murad is a survivor of the August 2014 genocidal attack by ISIS on her hometown, Kocho, in northern Iraq. She was captured and forced into slavery. 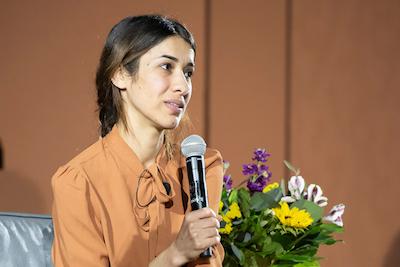 Since her escape she has become a leading advocate for her people and against the use of sexual violence in war. Earlier this month, Murad was named a joint 2018 Nobel Peace Prize winner with Congolese physician Denis Mukwege.

The primary homeland of the Yazidi people was in the Sinjar region. “Yazidis were a small minority, and we couldn’t hold executive positions, or have our own security in our community.”

Murad described her small village as one where there was only one school, and the road was finally paved in 2013. Most of the villagers were farmers, and it was a close-knit community.

“If there was a wedding, all would attend the wedding and it would be held outside,” she said.

“There were 200 families, and we all lived in big families,” she said. Her own family had 21 people and were very close.

She described what happened to her people in 2014, when ISIS forces invaded.

“They didn’t attack Christians. They were given a choice -- they could pay a fee or leave. But when ISIS attacked Yazidis, we were considered infidels and they wanted to eliminate us. Women were killed or captured and made into sexual slaves,” she said.

Many people fled to Mount Sinjar, and were able to escape into Syria with the aid of U.S. troops, but the people of her village were not able to escape.

“They shot the men and old people and took women and children captive. People were buried in 40 mass graves around the village,” Murad said.

Close to 5,000 people were killed on the same day, including Murad’s mother and six of her brothers. More than 3,000 of those taken are still being held captive, she said.

We are now scattered, with 80,000 in Europe, and survivors in Australia, Germany and Canada. More than 350,000 still live in refugee camps.

“What we fear is we might lose our identity if we lose our homeplace,” Murad said.

About 65,000 Yazidi have returned and resettled in Iraq. The religious leaders decided that the women and girls who are return from captivity must be reintegrated and respected.

“This is a courageous decision for that region. ISIS propaganda told the women that if they went back, they would be killed or prosecuted, but we wanted to make sure our women know that is not true,” she said.

Getting action from world leaders has been challenging, she said.

“Not just me, but other women have spoken out, but so far we have not seen an ISIS member in court for their crimes,” Murad said.  “Speaking about what happened to me and to the Yazidi, it is not easy to do, but it is not only my own story,” she said.

Other groups, such as Al-Qaeda and Boko Haram also have used sexual violence as a weapon of war, also with no consequences, she said.

“I don’t consider myself to be strong. Because I am doing this work, most of the time I fear -- I fear for myself and those who work for me. I fear this will happen again, and we women, must speak up simply because we are the victims,” said Murad.

Murad expressed mixed feelings about receiving the Nobel Peace Prize. When she heard the news, she realized “I would not be able to have a simple life,” she said.  “My dream was to have a salon and to do makeup for weddings,” she said. That life was taken from her, she said.

During the Q & A period, an audience member asked, “What is the next big thing for you?”

“Marrying me,” said Shamdeen, breaking out of his role of translator and earning a laugh from the crowd. The couple became engaged in August. He is the co-director of Nadia’s Initiative, a nonprofit that advocates for women and minorities and assists communities in crisis. He served as a translator for the U.S. Army during the war in Iraq.

Another audience question was “How do you define peace?”

“For me, peace is when people sit together and don’t ask, ‘What is your religion?’, when women are not lower… Peace is when we accept each other,” Murad said.

Murad tells her story in the memoir, The Last Girl: My Story of Captivity, and My Fight Against the Islamic State. She is also the subject of a new documentary, “On Her Shoulders.”

Before winning the Nobel Peace Prize, Nadia received the Vaclav Havel Human Rights Prize, the Sakharov Prize, the Clinton Global Citizen Award and the Peace Prize from the United Nations Association of Spain. She also was named the United Nation’s first Goodwill Ambassador for the Dignity of Survivors of Human Trafficking.