In this conversation with Philip Napoli, the James R. Shepley Professor of Public Policy, we discuss a new research report in a series from the News Measures Research Project (NMRP).

A. First, although lots of local newspapers have closed down or reduced staff, the ones that remain are producing the lion’s share of local news. Second, while there’s great hope that online journalism sources can fulfill the growing gap in local news, it’s not happening. At least not yet.

Q. In a previous study, you found that only about 17 percent of the news stories provided to a community are truly local – meaning stories are about the community or took place within it. How is your new study related to your previous work?

A. We already know that economic pressures create overwhelming incentives for local news outlets to aggregate and repurpose existing content rather than do their own original reporting. The new study goes beyond documenting the problem – how little local news is being created – and breaks down where the remaining local news is coming from.

By comparing the share of outlets in each media type with their local story output, we were able to show the relative magnitude of the journalistic contribution each outlet type is making to their local communities. We measured which media types were underperforming relative to their frequency in the community and which were overperforming. And the results were clear: Newspapers are still making the most significant contributions to local news ecosystems.

By the way, if a newspaper previously had a print edition but had moved to online-only, we categorized it as a newspaper. We did that to distinguish legacy news outlets from new, digital-only outlets. 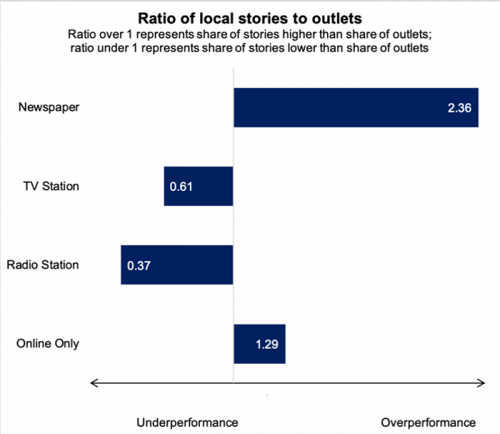 Q. What communities did you study?

A. Most media research has focused on large markets and big cities. Our research looked instead at communities with 20,000 to 300,000 residents – 493 of them. This includes, for example, cities like Durham, N.C., St. Petersburg, Fla., and Laredo, Texas. We randomly selected 100 of the communities to analyze. We found 663 local media outlets that fit our parameters and analyzed 16,000 news stories.

Q. Radio stations were the most common outlet type - 340 of the 663 outlets. Yet, they did not produce local stories in proportion to their prevalence. Was that surprising?

A. It actually makes sense. Radio broadcast licenses are geographically more widely distributed than TV broadcast licenses, which tend to be assigned to larger metropolitan areas, so there are more of them. Plus, most radio stations exist primarily for entertainment. And because we looked at all local radio stations – not just ones that were news stations – we would expect the proportion of radio stories that qualify as local news to be small. Incidentally, few communities of the size we studied have a local TV station.

Q. Are online-only news outlets contributing anything at all?

A. We did find that 82 percent of the local, original stories produced by online-only outlets addressed a critical information need. For newspapers that figure was 63 percent. (Critical information needs relate to emergencies and risks, civic information and politics, health, education, transportation systems, environment and planning, and economic development.) This says online-only outlets are doing better on at least one measure of journalistic quality.

Q. What are the implications of your work for policymakers and philanthropic organizations?

A. Contrary to what some people are thinking – “newspapers are dying; let them die” – this research suggests newspapers are still delivering important information for their communities, even in their diminished condition.

The philanthropic community has been investing in digital news start-ups for a decade, looking for the new business model that can succeed. Even so, most of them are under-resourced. Maybe we have the answer – there isn’t a new and better business model. Perhaps subsidizing newspapers is the best solution.

Maybe we have the answer – there isn’t a new and better business model. Perhaps subsidizing newspapers is the best solution.

Q. Given more time, could digital sources catch up to newspapers in creating local news? Could your work be documenting a shift from legacy newspapers to digital news sources that’s still in progress?

A. It’s possible. It would be interesting to do this study again in three years.

It is part of the News Measures Research Project (NMRP) led by Philip Napoli. The project is supported by The Democracy Fund and the Geraldine R. Dodge Foundation.