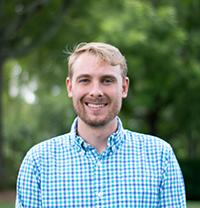 Andrew Worrell MPP/JD ’22 received a surprise email in the midst of the COVID-19 pandemic – he found out he had been awarded the Miguel Angel Fava Fellowship. This endowment was established in 2017 by Marcelo Fava MPP ’99 in honor of his father, Miguel Angel Fava, and provides fellowships to selected Sanford students.

“It is quite honestly a pretty difficult moment to describe, but it was a huge part of feeling comfortable in pursuing two graduate degrees and committing to four years of graduate education and all of the sacrifices that entails,” Worrell said.

Worrell is a dual-degree student, pursuing a Master of Public Policy (MPP) degree from Sanford and a JD from the UNC School of Law. A native North Carolinian, he grew up about an hour south of Durham in Lee County. He has a bachelor’s degree in Global Studies with a concentration in Latin American Studies and a minor in P.P.E from the University of North Carolina at Chapel Hill. After graduating from UNC in 2015, he accepted a position with the College Advising Corps where he spent four years working with high school students as they navigated the transition to life after graduation. His experience working with underserved student populations led to his interest in public policy.

Why public policy? Worrell said because public policy applies to every area of society. After graduation, he wants to pursue a career as part of a mission-driven team, where law and policy overlap.

“I want to explore the most important questions that we have to answer, which is in a world with limited resources, how can we maximize human thriving? Using data and evidence as my guide, I am exploring questions that are both fascinating and incredibly important,” he said.

He said the fellowship has made a significant a difference in his ability to pursue his graduate degrees – especially during the global pandemic.

“In early 2020, as I was waiting to receive my admission decisions, the COVID-19 pandemic began to spread widely across the U.S. I was working in a public high school at the time and my work went remote. I was worried about my students, but I also found myself facing the same uncertainty that many of my high school seniors were facing in the new world created by the pandemic. I seriously doubted whether this was the time to give up a steady paycheck and return to school. After many months of uncertainty and doubt, finding out that I had been awarded a fellowship to study at Duke was the first time that I remember feeling confident in my decision to go back to school,” he said.

Worrell said the fellowship has provided the freedom to pursue his interests in graduate school.

“The financial assistance that I have been given has allowed me to pursue a wider array of summer internship opportunities because I am less worried about the salary being offered. I am able to look at work in the non-profit sector and city and state government positions, which I would be less likely to pursue without the fellowship. I would never have been able to pursue a dual-degree curriculum without financial assistance. It has truly opened up doors for me that I would not have been able to go through on my own,” he said.

Learn more about Sanford fellowships for the MPP program.