Major General Ron Clark spoke about the history and the challenges still faced by the U.S. Army on issue of race, diversity and inclusion during a virtual event hosted by American Grand Strategy and co-sponsored by the Sanford School of Public Policy on July 31.

In conversation with Sanford Professor David Schanzer and Dean Judith Kelley, Clark talked about the work that still needs to be done. While the U.S. military was integrated over 70 years ago by the order of President Truman, very few Blacks or people of color rise to the top ranks as general officers.

As the Chief of Staff of the U.S. Indo-Pacific Command, Clark is one of those few.  “I am almost always the only African-American officer in the room,” Clark said.

Clark was Counterterrorism and Policy Fellow at the Sanford School in 2013-2014. His research project examined the reasons for the dearth of Black senior officers in the U.S. Army in the Infantry and Armor branches. Dean Kelley was his academic advisor on the project. 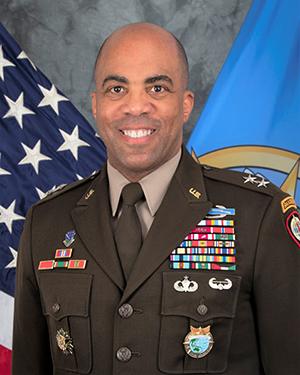 To begin the discussion, Clark talked about his own background. A graduate of West Point, he grew up in an Army family. “My father joined the Army in 1964. He knew it was integrated and he believed in the ideals of equality,” Clark said.

“He understood that the Army had systems in place to deal with racism,” he said, even though there were outside systems in the country that reinforced it.

Clark credits his family, especially his father, for enabling him to deal with the racism he would face. They emphasized character, being prepared, calm and dignified at all times.

Clark told the story of winning election as homeroom representative to the student council in the ninth grade in a small town in Louisiana. The teacher told Clark he should give the position to his opponent, because “she is going to college.”

“My response was it is will of the people that I represent them. My family had prepared me,” Clark said. “Because of them, I was ready for that teacher.”

Schanzer asked about what role a big institution such as the military can take against racism.

The Department of Defense role is important, to help the country through dealing with these issues, Clark said.  The military has the systems and legal authority to make changes quickly.

For example, he pointed to the reaction earlier this year, soon after the protests started over the killing of George Floyd. The Army formed a committee to make it clear that racism is against the Department of Defense values and not acceptable here.

“We lead from the front and by example,” Clark said.

At the directive of the Army Chief of Staff, several changes were made right away. The Army has set aside time for the leaders to listen. “They go to a neutral location and site, so people can come and tell their story,” whether it is about racism, or the pandemic, or other issues about work, he said.

The Army has also changed the promotion process. Official photos will no longer be included in the files submitted to the selection boards, to counteract selection bias, the tendency of people to favorite those like themselves.

Kelley pointed out that many of the points discussed had been raised in Clark’s thesis at Sanford. He is now a role model for other people of color in the Army, but there was still work to do.  “How optimistic are you that the next two star general is in the pipeline?” she asked.

“It starts at the academy,” Clark said.  It takes 20 years to grow a general officer, because the military can’t bring people in at the mid-career level.  Creating diversity and inclusion in the top ranks will require mentors in place, at the academy, visiting ROTC programs, and throughout the ranks, to show people, “I exist, you can be like me,” he said.

Amy Kramer PPS’18, currently serving as a McCain Strategic Defense Fellow and policy analyst at the Pentagon, acknowledged that the problem of diversity and inclusion in leadership was a long-term problem, as it is hard to get a 21-year-old to think about branch preferences that are leadership pipelines. She also asked Clark what could be done to address the culture of racism in the Army.

“The skill that people hire you for is leadership,” Clark said. There may be other transferable skills in areas such as cybersecurity and intelligence, but it’s whether you want to “be an offensive lineman or a quarterback.”

Clark thought that renaming of bases was “a huge step forward,” if you peeled back the “why” of how these bases and buildings were named, and what the names really meant. The push for naming the bases came from the United Daughters of the Confederacy during the 1920, when white supremacy was on the rise. He pointed out that General Robert E. Lee used to be on the recruiting materials for West Point, even though he was the “general that killed more Americans in the history of the world.”

Lee is no longer on those materials. Making those kinds of changes, such as changing base and building names, is how the military can make people of color feel seen, Clark said.

The event was co-sponsored by the Duke Program in American Grand Strategy, the Department of Political Science and the Sanford School of Public Policy.