“Lobster War,” a forthcoming documentary film that offers a window into a long-running territorial dispute between the United States and Canada, features a Sanford scholar who has taught a course using the dispute as a case study.

Both countries have claimed ownership of Machias Seal Island in the Gulf of Maine for more than 200 years.The island was declared U.S. territory after the Revolutionary War, but after maintaining a lighthouse on the island for almost a century, Canada has a substantial claim, too. The confusion extends to the 277 miles of water surrounding the island, an area fishermen call “the gray zone.”

Now, according to the documentary, climate change is heating up the dispute.

Warmer waters are making lobsters more abundant. As the fishing grounds have become more valuable, tensions between Canadian and American fishermen have been rising.

When filmmakers David Abel and Phil Laub set out to tell this story, they called on Sanford School Research Scholar Stephen Kelly to shed some light on the subject.

“This is not an issue that’s very well known,” Kelly says. “Anytime someone wants to do a story on Machias Seal Island they Google it and find an op-ed I wrote for The New York Times.So, the filmmakers contacted me and said, ‘We’d like to come by and talk to you about the dispute with Canada over Machias Seal Island.’ And I said, ‘Sure!’”

Kelly has dealt with matters of foreign policy and border security for most of his career. He was in the U.S. Foreign Service for 28 years, with stints as U.S. Consul General and Deputy Chief of Mission in Canada before he came to the Sanford School in 2010. Early in his career, he was a journalist for several U.S. newspapers.

Kelly has studied this fishing crisis for years, and he has visited the island twice. He believes the battle for the prized lobsters won’t come to an end anytime soon for a variety of reasons, including a change in fishing regulations.

Before the summer of 2002, Canadians didn’t allow their fishermen to fish after June 30th, when the fishing season in Maine was just beginning. Because seasons were so different, Maine lobstermen and Canadian lobstermen were not in the waters around Machias Seal Island at the same time for most of the year.

But now, the Canadians changed their regulations. Fishing is still prohibited in most Canadian waters during the summer, except around Machias Seal Island.

Now, fishermen from both countries are “jousting for position” at the same time. While violent incidents between fishermen have been isolated so far, Kelly fears there is potential for more dangerous ones to arise.

“This is the beginning of the conflict,” Kelly says during the film trailer. “This is the last land border dispute between Canada and the United States. It can be magnified to the point where there could be costs that could be significant to both countries. Border disputes don’t go away, they just fester. Something’s going to happen.” 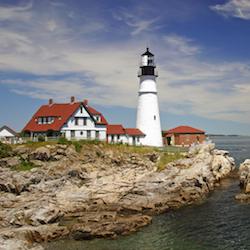 Both Canada and the U.S. have made compelling arguments as to why the island belongs to them. Canada claims that the lighthouse they maintain on Machias Seal gives them a right to the island. But Kelly notes that according to maritime law, aids to navigation don’t officially confer sovereignty. The U.S. maintains that this, and the treaty that ended the Revolutionary War, are enough to grant them ownership of the island.

“There’s a court in The Hague, the International Court of Justice, that exists to resolve issues like that. My argument, as [I wrote] in my op-ed, was, ‘Let’s go to the international court. Both sides present their best legal arguments. And then we agree to live by whatever the court decides.”

Kelly says it would have been best for the two countries to work out an agreement when there wasn’t so much at stake, economically. While the U.S. unsuccessfully made overtures to Canada to solve the crisis over 20 years ago, the issue was a low priority and nothing happened.

Kelly fears chances of reconciliation are significantly worse under current administration in office.

“We have a very nationalistic president. With previous administrations, nobody cared about the issue. The State Department was perfectly happy. ‘If it ain’t broke, don’t fix it.’ You might have conditions united now where there is an economic resource that both sides are scrambling over.”

Tensions have continued to rise between the U.S. and Canada.. This summer, there were  reported incidents of Canadian fishermen being approached and questioned by U.S. Border Patrol agents. One fisherman described the agents as “typical American bullies” and says that their behavior came as “no surprise.”

Despite the growing turmoil between the two countries, Kelly still has hope for a peaceful solution.

“I don’t think it’s going to lead to blows between the U.S. and Canada, although the current environment is not as rosy as it has been in the past,” he told The Guardian. “But why let an issue like this hang out there and provide a burr under the saddle?”

“Lobster War” has not been released yet, but updates and a trailer can be found at lobsterwar.com.