Lessons from the U.S. Capitol Riot 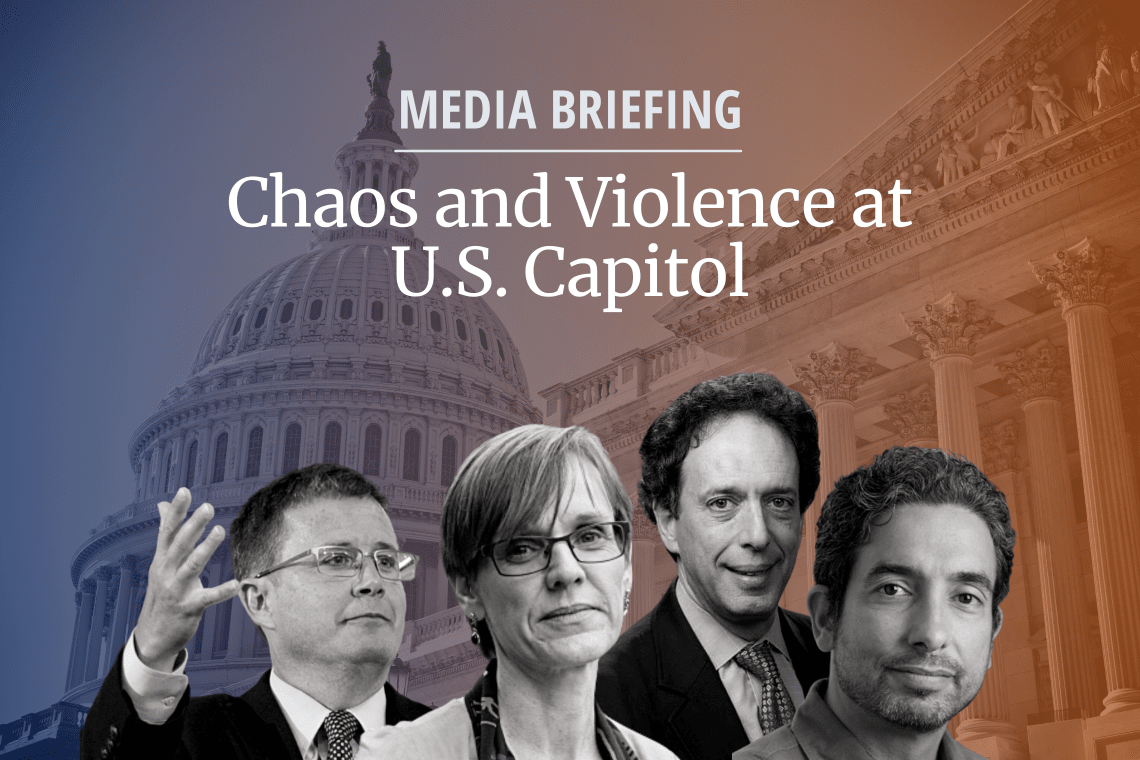 This article was originally published on Duke Today.

The jaw-dropping insurrection at the U.S. Capitol Wednesday, egged on by President Trump, has shone yet again a harsh spotlight on domestic terror groups, disinformation and the role the military plays in domestic security issues.

Four Duke experts spoke Thursday on these and other topics during a virtual briefing for members of the media. (Watch the briefing on YouTube.)

ON THE CAPITOL INVASION

“This is a domestic terrorist movement. I’m afraid it’s gotten to that point. Terrorism experts have been warning about the rise in right-wing extremism inside the United States for a decade. It has been growing substantially during the Trump administration, yet really only small numbers of individuals had been mobilized to violence.”

“What we saw yesterday showed a massive amount of people driven towards violence. That’s really having taken this movement to a new level that is deeply disturbing and will have to be addressed.”

ON ROLE OF MILITARY DURING THE CAPITOL INSURRECTION

“For the last six months there’s been a lot of speculation. Would President Trump be unwilling to step down if he lost the election, and would he use his powers as commander in chief to try to create some kind of chaos that would allow him to stay in power? The military has been crystal clear in messaging in the last six months: There is no role for the military in the peaceful transfer of political power. They don’t have a role in it under the Constitution.”

“When you mobilize the military in response to domestic violence and a breakdown in law and order, it can, itself, introduce all sorts of other complications. They did not like getting mobilized in response to the riots in the end of May and early June.”

“As a consequence, they were leaning very, very far in one direction on the horse to avoid falling over where they did in May and June, and they may have been a little slow to respond.”

“This was violence that the president himself was inciting, conducted by his own supporters, and was putting at risk the members of Congress. It took them a little while to respond but then they eventually did, and order was restored.”

“While there’s certainly lessons to be learned … in the long run we can be grateful the military did what we want them to do and did not do what we didn’t want them to do.”

ON THREATS TO DEMOCRACY IN THIS MOMENT

“One of the features of Democracy is it is inherently a volatile institution. It has to be able to be challenged. If we don’t have ways for Democracy to be challenged, it actually would be more susceptible to abuses of power.”

“But what we’ve also really had displayed the last couple months is just how much the rules and procedures that underlie democracy are supported by shared norms. What we saw yesterday was a breach of both the rules and the norms. The test of the democracy is not whether it gets tested – it will get tested – but it’s how it withstands that test.”

“The United States has for a long time portrayed itself as a shining beacon on the hill. Yesterday some very strong winds blew through the halls of the Capitol. The shining lights flickered, but they have stayed on. We have a lot of work to do in thinking about how we keep them on.”

“For decades we have been admonishing governments around the world about how to run a true democracy. It’s really something to see some of those very governments laughing at us right now. It really points out the value of us understanding our history.”

“We have work to do right here in America.”

ON FIGHTING MISINFORMATION ON SOCIAL MEDIA

“I would certainly like to think this is a moment that finally catalyzes a much more robust conversation about both regulatory and self-regulatory efforts to police disinformation on all our various media platforms.”

“We have to begin with the actual news consumers. It’s easy to frame this as a Facebook problem or a YouTube problem, but the reality is, the average person doing even just the minimal amount of work can pretty much determine for themselves what is legitimate.”

“There are deeper problems with them as citizens, as news consumers, that need to be addressed. We have to make sure the next generation of voters has a skill set, particular norms about how they go about informing themselves that current generations do not have.”

“It’s not just these platforms becoming more rigorous. These notions of, ‘We’re going to flag this content and put a label on it,’ those were silly to begin with and they seem more silly now.”

“We are not all entitled to the right to disseminate whatever’s on our mind on social media. The sooner we get to that understood norm, the better. But we also have to train our students to be better news consumers than the average adult is today.”

ON POLITICIANS AND LIES

“We need to end what’s been a four- to five-year period of massive lying from the executive branch, from the president. And then we need to have a culture in the country that punishes the intentional telling of falsehoods. Now is that going to stop misinformation from spreading on the platforms? No. But especially when it comes to terrorism, it’s the charismatic leadership telling falsehoods and lies and distorting what America is, what our system is, and who has opportunity and who has not, that creates the magnification of the grievances.”

“I think we need to have a very candid discussion about how to re-inculcate truth-telling into our political ecosystem.”

“I think after yesterday there’s no question this will need to be taken more seriously. I certainly believe elements like the FBI have their eye on these groups and individuals who were advocating or fomenting violence during the Trump administration. A new administration can bring more resources, focus and direction from the White House to identifying this as a serious national problem.”

“I don’t think you can witness what happened yesterday and not come to the conclusion that large-scale people armed and wiling to engage in large-scale violence, and the protests many of which turned violent and are still happening in state capitals, combined with the attempted kidnapping of the governor of Michigan … all of these things demonstrate this is a deeper, more societal problem.”

ON LEARNING HARSH LESSONS FROM THE INSURRECTION

“As tragic as the events of yesterday were, they did lay bare the consequences of what happens when politicians don’t tell the truth and when they stoke fear and hatred.”

“I don’t think we should expect rationality from a lot of these folks. … A lot of those folks felt they weren’t committing a crime.”

“And nothing has been clearer over the last four years than a sense that fairly egregious actions haven’t had consequences. That was really borne out yesterday when we watched so many of them just stroll right on out of the capitol.”

“When everything is said and done, I doubt we’ll be anywhere near satisfied that the number of people who should get prosecuted, are prosecuted.”

ON WHETHER THE BIDEN ADMINISTRATION CAN HEAL THE NATION, RETURN IT TO ‘NORMAL’

“There’s a large fraction of Americans who believe that some horrible wrong was done to them and to their party standard-bearer. It’s going to take some time for that poison to leech out of the system. I do think President-elect Biden has been remarkably sure-footed over the last two months. He ran a brilliant campaign, better than he had done in all of his previous attempts to be president put together. And since he won, he has been remarkably deft and careful and magnanimous under very extraordinary circumstances.”

“He’s been presidential, and that’s what the country needed yesterday and we got it from our president-elect. That gives me hope.”

“I’m a Republican myself so I’m going to sure disagree with some of the things they’re going to do, but it will be a normal policy debate, which is healthy. He is presiding over a very divided party himself. While the Democrats have won the Senate, it’s a razor-thin hold, and so that puts a lot of pressure on Biden as a party manager, as the party leader of a very fractionalized party.”

“It’s going to be a very challenging time for him, but it’s very encouraging that he’s handled the assignments he’s had over the last several weeks very well.”

“I do think our flame will continue to flicker. Maybe we do need to turn down the hubris a little bit and examine where we need to make changes.”

“We have a lot of healing to do. Hopefully it will be an opening for a much, much broader conversation about where we are as a society.”

ON FACEBOOK’S BAN OF PRESIDENT TRUMP

“I wouldn’t want to lump all our social media or media organizations together. President Trump can get banned from Twitter and Facebook and YouTube and he can have free reign then on Parler. Legitimate news outlets can cut away from news conferences and speeches and rallies when he starts to spew disinformation, but that doesn’t mean OANN and NewsMax and Fox won’t just continue to give him a platform.”

“The reality is, he’ll probably end up with his own show or his own network after the election. We have a massive, systemic problem. Certainly, what Facebook has done is helpful … but this is a space that is starting to fragment. There are a lot of platforms out there. The audience will follow him. Not all of them, but plenty will.”

Peter Feaver
Peter Feaver is a professor of political science and public policy. He was a special adviser for strategic planning and institutional reform on the National Security Council staff in the George W. Bush administration from 2005-2007, and was director for defense policy and arms control in the Clinton administration from 1993-1994. Feaver directs the Duke Program in American Grand Strategy.

Judith Kelley
Judith Kelley is dean of the Sanford School of Public Policy at Duke, where she is also a senior fellow with the Kenan Institute for Ethics. Her areas of research include human rights, democracy and international election observation.

Phil Napoli
Phil Napoli is a professor of public policy and a faculty member at the DeWitt Wallace Center for Media and Democracy at Duke, where he researches new ideas for social media regulation, news deserts and the contraction of news media.

David Schanzer
David Schanzer is an expert on counterterrorism strategy, counterterrorism law and homeland security. Schanzer was the Democratic staff director for the House of Representatives Committee on Homeland Security from 2003-005. He previously served as the legislative director for Sen. Jean Carnahan (2001-2002), and counsel to Sens. Joe Biden (1996-98), and William Cohen (1994-96).

--
Duke experts on a variety of topics related to politics and public policy can be found here.