On March 15, 2020, the Peace Corps officially announced to all volunteers that they would be evacuated due to risks associated with the international COVID-19 pandemic. Over 7,000 volunteers would soon be flown back to the U.S.

In response to that decision, the Sanford School of Public Policy has extended deadlines for the MPP and MIDP programs (May 15 and June 1, respectively) and increased automatic scholarship amounts.

Two first-year MPP candidates shared their thoughts about their decisions to come to Sanford and on what’s happening with the Peace Corps program now. Both had to leave their posts early due to natural disasters.

“I was also evacuated when I was a volunteer, so I’ve been thinking about the folks that could take advantage of this,” said Rachel Holtzman, about the extended application deadline. Holtzman is a dual MPP/JD ‘23 student at Duke and UNC – Chapel Hill who served in Nepal from 2015 to 2017.

On April 25, 2015, Nepal was hit by a 7.9 magnitude earthquake. The Gorkha earthquake killed approximately 9,000 people and caused $10 billion in damage. Holtzman and her cohort were brought to the U.S. embassy and worked for the consulate helping to find missing Americans in Nepal and communicating with their family members back in the U.S. After a week living in the embassy, their Country Director announced that their cohort was going to be evacuated back to the U.S.

“Evacuation is always so hard. It’s hard for the communities, the relationships, the Peace Corps volunteers who were ready to dedicate two years of their lives to learning and working with the community. It can be traumatic to be taken away from the place you are living so abruptly,” she said.

Both Holtzman and Natasha Luther MPP’21, who served in Ecuador from 2016 to 2018, remembered their Peace Corps service fondly and brought out similar themes. They remembered struggling to adjust to their lives abroad and the difficulties of integrating into a new society. 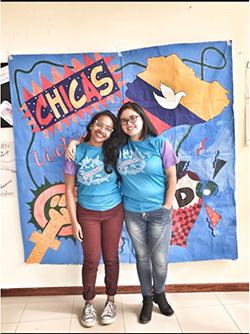 “I was in Cañar, in the Sierra region of Ecuador; it’s very high altitude, very cold. The population of the town was around 10,000 people. I think it took me at least eight months to feel comfortable, make friends, and be part of the community,” said Luther. Many in Luther’s cohort were also evacuated due to a 7.8 magnitude earthquake in April 2016, although she wasn’t personally affected.

Holtzman expanded, “For lots of volunteers, the first year is a really slow process of building trust and relationships.

For both Luther and Holtzman, the slow time paid off.  They learned the languages, built relationships, and took advantage of the unstructured time to build their own schedules allowing them to thrive.

“Every morning for about two years, I woke up and decided what my day was going to look like. I was working with the local health post, mainly doing nutrition trainings with local community health workers. I also did smaller projects: painted murals, led youth empowerment camps about caste equity, and helped write a grant to get new birthing equipment for the health post. And I spent a lot of time just drinking tea and looking at the Himalayas,” said Holtzman.

They both discussed how they have been able to continue their work here at Sanford.

For Luther that meant combining her experience mentoring young women and girls with her interest and knowledge of migration policy.

“I was in a town where Venezuelan families were moving to. What’s interesting was that the resettlement of these families was smooth because the community was supportive. A family with two elementary school aged girls was able to move to Cañar, immediately get the girls enrolled in school, get a house, and open their own pizza parlor," she aid.

“I want to continue working on migration policy but specifically how resettlement can be made easier for parents and youth coming to the U.S. The focus of the Youth Services department is to make sure that the kids are integrating well. At Sanford, you get the field work experience while also getting an education about program implementation experience. I have been able to connect the bigger picture and smaller picture.”

“I always knew that I wanted to go back to school and when I was in the Peace Corps, I really loved this balance between doing on-the-ground work and also being part of the Project Advisory Committee, which helped shape Peace Corps Nepal as a program. I loved this duality; this got me excited about this dual degree. I was so happy to see how many folks came into Sanford with backgrounds as public school teachers, organizers, AmeriCorps and Peace Corps volunteers, folks who care about public service,” said Holtzman.

Luther agrees. “It is really difficult to come back without having a proper goodbye in your community. It’s not going to be easy, but it’s nice to be in a school environment where people have a similar mindset to you. I have appreciated being able to build a community again."