Imam Abdullah Antepli, whose international involvement in peacemaking and reconciliation – especially among Jews and Muslims -- established his reputation as a faith leader and public intellectual, joined the Sanford School of Public Policy July 1. 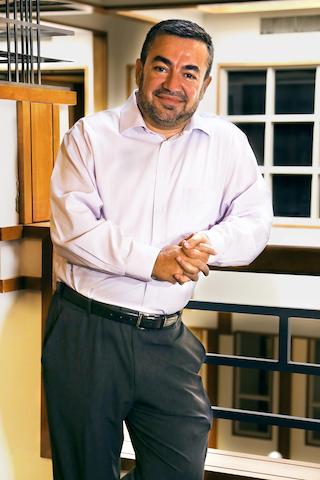 Antepli served as Duke University’s first Muslim chaplain and inaugural director of Muslim life at Duke from 2008-2014, and has been Duke’s chief representative of Muslim Affairs for the last 5 years. Antepli was also the associate director of the Duke Islamic Studies Center from 2014 to 2015. He joins Sanford as an associate professor of the practice, and will keep his ties with the Duke Divinity School through a secondary appointment.

Antepli travels up to 200 days a year, working with various governmental and civic initiatives on faith-based peacemaking. Antepli has served not only the Duke community, but also the nation, advising Secretary of State John Kerry’s Office of Faith-Based Initiatives, and various federal and international agencies, including the United Nations. Antepli co-founded the Muslim Leadership Initiative at Shalom Hartman Institute in Jerusalem in 2013. Its goal is to build better relations by educating young American Muslim leaders about American Jews, Zionism and Israel.

Antepli’s goal at the Sanford School of Public Policy is to create a body of public knowledge and more scholars who are able to address important topics at the intersection of religion and policy through teaching, conversations, mentorship and advocacy.

“Sanford is an ideal place for my next Duke education and growth. I am honored and looking forward to joining the Sanford family,” he says.

“Religion, Restrictions and Violence” is the new course he will co-teach this fall with Ellen Davis of the Divinity School and Laura Lieber of the Jewish studies department. This interdisciplinary, interdepartmental undergraduate course merges the “confessional,” or living and practicing aspect of religion as taught in the Divinity School, with the “secular,” or religious studies approach to the material, Antepli said.

The objective of the course is for students to understand the patterns across religions that allow for religiously justified violence and disenfranchisement, including political and cultural marginalization. They will discuss multiple forms of extremism and the role and nature of citizenship and territory.

Antepli has personal experience with being persecuted for his beliefs. While he was born and raised in Turkey, he cannot go back.

“I’m one of tens of thousands of academics and intellectuals who will be jailed if I return to Turkey under the current administration,” he says.

One of Antepli’s goals is to cultivate new scholars of religion and policy. He and his co-teachers took their four teaching assistants to Jerusalem for an immersion into the restrictions in religion that result in violence. This work to build broader public scholarship on this topic is supported through a grant from the Arthur Vinning Davis Family Foundation, which also funds a conference, a seminar and other co-curricular activities.

Antepli has previously lectured alongside a handful of Sanford faculty, including terrorism and security studies professor David Schanzer and foreign policy expert Bruce Jentleson. He hopes to bring his in-depth experience with leadership development fellowships, character-building educational programs and conflict resolution initiatives to other initiatives of the Sanford School.

“Locally and nationally,” Antepli says “I would like to be involved in the depolarization of our political system.”

While Antepli plans to lead pop-up conversations about issues as they present themselves, he also is working with Schanzer to create models for meaningful cross-religious, cross-cultural and cross-ideological interactions among Duke student groups. Antepli and Schanzer have proposed a program to build a cohort of faculty and students who have an understanding of both sides of the Israeli-Palestinian conflict and to develop techniques for discussing it in ways that promote reconciliation and mutual understanding. They hope this project will contribute to a broader understanding of this divisive issue as well as help prevent and resolve future conflicts on campus.

It is a scary time for Muslims in North Carolina and in the nation, Antepli says. Duke, however, has been one of the leading institutions of higher education working to respond to post 9/11 challenges, he said. It was one of the first universities to hire a Muslim chaplain when Antepli was recruited in 2008 and the first to create a center for Muslim life on campus.

Antepli plans to deepen his work on policy issues regarding anti-hate and anti-bias issues.

“The definitions of hate, bias, bigotry and discrimination are a half-century old. These issues need to be redefined. The language needs to be more inclusive. What worked as welcoming and inclusive 60 years ago is very oppressive at this moment. Furthermore, hate crime legislation is needed on a state and national level.”

“We have work to do to reflect the reality that Duke is a welcoming place for everyone,” Antepli says. “But with Sanford investing in this public scholarship through my appointment, and by creating a model and exemplifying ways we can engage with Islam as a religion and Muslims as people in our society, we are furthering the progress.”

One of his greatest challenges and honors, Abdullah Antepli said, was to deliver the opening prayer at the U.S. House of Representatives. He did this twice at the invitation of U.S. Rep. (and Sanford faculty member) David Price.

As the communications and events manager, she designs and implements promotional strategies to engage the student body, as well as the broader community, with visiting thought leaders.

She got her B.A. in Latin American studies from the University of Wisconsin at Madison many moons ago, and more recently, a certificate in technology and communication from UNC-Chapel Hill's School of Media and Journalism.

Mary has roots in Colorado, India, Mexico, the PCT, and the Midwest. However, she lives in Chapel Hill with her family, where she has lived on and off again since 1999.