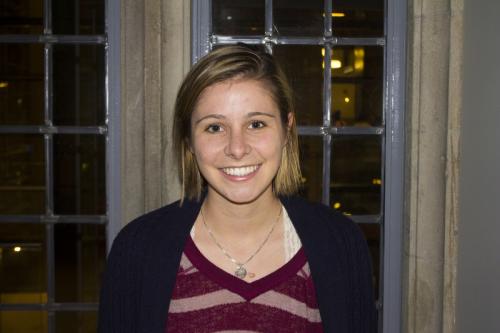 “I think evaluating the ways in which your religious freedom affects other people is important. I personally define religious freedom as [allowing] for all people to be able to practice what they want without fear of repercussions or for their safety, like when people don’t want to admit their religious identity because of potential dangers, like with Islamophobia. Building on that, the right to exclude is very narrow. I think educating yourself is huge, because you don’t want that burden to fall on someone when it’s already hard to speak up in the first place, and learning more about other people’s beliefs will ultimately go back to that - to affecting our policies. Recognizing religious privilege [is important] - it’s easy to say ‘It’s just my identity’ or, you know, ‘It’s my religious freedom’. I think a lot of Christians feel persecuted even though they’re the majority and relatively speaking they’re still privileged in a lot of ways, when you compare them to Muslim people or people who are Jewish. When there’s legislation up for debate that's impacting religious freedom, the bare minimum you can do is call and write to your senators and tell them, ‘This legislation is excluding this or that group’ or ‘It’s important you work to get this passed so we can live in a more unified society,” and stuff like that.

“Some things Duke could do to improve inter-faith life on campus: I think one is [fostering] the community between religious life groups on campus, especially Christian groups are segregated and don’t mingle much with each other. I think they could get together - Muslims, Christians, and other [religious] people - and do social projects and serving the homeless and doing something of that nature. Especially in today’s political and religious climate, I think it’s important to highlight what you have in common, rather than just focus on your differences, because that can be very polarizing. People should take time to get to know people of different religious backgrounds because that could really lead to some religious groups being better-represented in policies.”

#HumansofDukeSanford is a weekly series highlighting members of the Sanford community.