“Name a social ill, and there has been a demonstration project that shows us what works,” said Ford Foundation President Darren Walker.

Philanthropy has been very successful at supporting demonstration projects, but has been “unable to maintain the progress at scale,” he said. In conversation with Jay Pearson, assistant professor of public policy, Walker gave the Terry Sanford Distinguished Lecture at Penn Pavilion on Tuesday evening.

Scaling up success so more people benefit demands that we look at the root causes of inequality, which requires uncomfortable conversations. “Privileged people do not like being uncomfortable,” he said.

Change will require that the privileged be uncomfortable, not only through engaging in difficult conversations, but in giving up some of their privilege.

Pearson asked, “What is the root cause of type of inequalities you are looking to address?”

Walker pointed to racism and classism. “Racism is imbued in the foundation of our country,” he said, and “we have to get more comfortable with the contradictions of who we are.”

He quoted Thomas Jefferson, “The work of American is to build a just nation.”

“Jefferson’s words were brilliant, absolutely brilliant, and yes, he was a hypocrite,” Walker said. “In spite of the fact that our founders were racist, they also left us the tools to fix what was wrong,” he said.

Currently, the systems, structures and social practices of our democracy are designed to create and support inequality, Walker said. This is not unique to the United States, he said, pointing to the example of Eastern Africa where the Ford Foundation had offices and were criticized for hiring too many people from the privileged ethnic group there.

“People design structures that are intended to create hierarchy. That is a global phenomenon, but in the U.S. it has manifested as white supremacy,” said Walker.

The data are clear that racial inequality is powerful in this country, and that education and income are not equalizers.

“The challenge for white people on the journey with us is: what do we do about this?” said Walker. “That is the hard work, the work of this nation.”

In addition to giving the lecture, Walker has been meeting with a group on campus exploring ways to address inequality in the South. The group includes Durham community members as well as scholars from Duke and UNC.

Pearson asked a questions submitted by a Durham community member: “What are the core characteristics of a justice-informed partnership between funders, universities and those disproportionately impacted by inequality?”

“First, by recognizing and owning the power imbalance, and how that can distort our behavior. We in philanthropy have a false sense of humility, a fake sense,” Walker said.

Philanthropists should not privilege the knowledge of experts over the lived experience of the people closest to the challenge. “The people who are in those communities are the experts, too,” he said.

Without that perspective, community members are reduced to being subjects, to being observed, instead of being partners. The design of the engagement has to include the perspective of people on the ground from day one, he said.

Pearson then asked what funding the Ford Foundation might be doing that includes that perspective.

“The thing that nonprofits need that they cannot get is general support,” Walker said.

Nonprofits, like other ventures, need flexible capital. To address that, the trustees of the Ford Foundation approved a $2 billion dollar initiative to provide general support to institutions that are on the front lines of combating racial and gender inequality. Now 75 percent of the foundation’s spending is for general support, he said. Another change is the foundation provides funding over multiple years instead of approving grants for one year at a time.

“Your whole headset has to change as a foundation. To say, actually, our work is to invest in institutions and people,” Walker said.

The Ford Foundation’s changed perspective is also seen in its art collection and the display at the New York headquarters. Walker sold the original collection, which was mostly European artists, who were all white men and one white woman. They used the funds to acquire a new collection that is 80 percent created by people of color, women and queer artists.

“It’s gotten a lot of attention, because it does reflect who we are as a foundation,” Walker said. 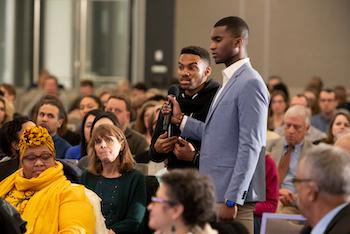 Walker was also concerned that U.S. society has “allowed the degrading of public goods.” The word public now has negative connotation, when used with public housing, public transportation, public lands, etc. Privatization of public goods can accelerate inequality. “I believe we will regret that,” he said.

“The idea of social justice, of fairness, is rooted in every human being as worthy of dignity,” Walker said.

Darren Walker speaks to guests after the event.