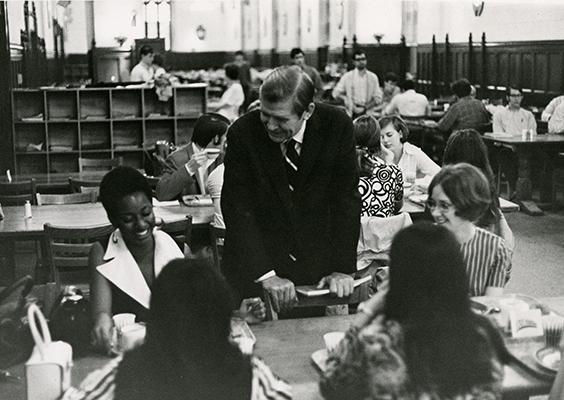 A new exhibit at Duke University’s Rubenstein Library, “Terry Sanford: A Change Leader for Duke” explores the turbulent 15-year period from 1970 to 1985 when Sanford was the institution’s sixth president.

Sanford was a transformational leader who called upon Duke and its students to pursue “outrageous ambitions,” and quickly advanced Duke as it grew from a respected Southern university to a world-class research institution.

The exhibit also chronicles Duke’s growth, Sanford’s creation of the public policy program, his arts initiatives and his involvement in Durham revitalization. During his tenure, the university became the new home of the American Dance Festival and began seeking academic partnerships with China and Russia.

“Terry Sanford’s vision, energy and optimism were extraordinary,” said exhibit curator Karen Kemp, assistant dean for communications at the Sanford School of Public Policy. “The more I learned about him, the more I admired his willingness to take risks, and his talent for inspiring people to accomplish more than they had thought possible.”

Before coming to Duke, Sanford was governor of North Carolina in the early 1960s. He focused on strengthening education, combating poverty, and expanding civil rights, and was later recognized as one of the 10 best governors of the 20th century.

Sanford’s leadership ability was tested only a month after he became president. In May 1970, Duke students joined angry college students nationwide in protests sparked by the fatal shooting of anti-war protesters at Kent State University.

Hundreds of universities shut down, but Duke stayed open. Sanford’s skillful handling of the crisis was praised by administrators and students alike, and set the tone for the rest of his administration.

“Working on this exhibition opened my eyes to how Duke went from being a great university to being nationally known. It was a challenging period in our nation’s history and it was interesting to see how President Sanford thoughtfully and strategically made decisions that made us who we are today,” said Meg Brown, the E. Rhodes and Leona B. Carpenter Foundation Exhibits Librarian.

Sanford ran for U.S. president twice during his Duke tenure: in 1972 and 1976. He said his Duke role was “of first importance” and yet, it “neither disqualifies nor relieves me from the duties of citizenship.”

Sanford, who died in 1998, would have turned 100 years old in August 2017. The exhibit is part of a series of activities celebrating his legacy throughout this academic year.

“Terry Sanford: A Change Leader for Duke” is on display in the Mary Duke Biddle Room of Rubenstein Library through July 28. The gallery is open Tuesdays-Fridays, 9 a.m.-5 p.m. and Saturdays, 1-5 p.m. Most of the materials on exhibit are from Duke Archives. Co-curators were Tiffany Johnson Lapuebla, Michael Rebman and John-Paul Smith.