When Keiley Gaston first set foot in Detroit in summer 2016, she had no idea the city would end up informing her studies for the next year.

Gaston, a senior public policy and economics double major who is also pursuing a 4+1 MPP program at Duke University, was in Detroit the summer after her sophomore year to intern at Build Institute as part of DukeEngage Detroit.

She quickly fell in love with the city and its “cool, entrepreneurial vibe,” even getting her parents and friends to visit so she could show them around during her free time. 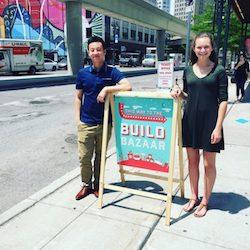 During the fall semester of her junior year, Gaston went abroad, but she couldn’t stop thinking about Detroit.

“I knew it was an experience I didn’t want to just leave behind in the summer,” she said. “I had already been thinking about writing a senior thesis but didn’t have a topic yet, so I drew from my experiences in Detroit to shape my research question.”

Now in her senior year, Gaston is working on a thesis that explores corporate social responsibility and how companies make decisions regarding philanthropy. To support her argument, she’s using as case studies two companies she had the opportunity to tour during DukeEngage Detroit – General Motors and Quicken Loans.

“General Motors does a lot of philanthropy in Detroit, and I wanted to see how the company made decisions about where to spend their philanthropy dollars,” Gaston said. “Quicken Loans, which is in the center of downtown, has also had a huge impact. All these companies work together with a goal of making Detroit more livable.”

Because of her experience with DukeEngage Detroit, Gaston was able to procure contacts at each of the companies and set up interviews with their corporate leaders over the summer.

Looking at these two companies helped Gaston realize that corporate social responsibility is changing a lot. Older companies often kept a philanthropic foundation separate from the business side, treating philanthropy as if it were a box to check off annually.

On the other hand, younger companies have formed with the intrinsic need to give back, an idea which is often integrated into the business model.

Quicken Loans calls this model a “for more than profit” model, and Gaston has found that the model is cyclical and actually ends up benefiting the company in the end. For example, when Quicken Loans donates to public schools, it helps educate students and build a better future workforce.

During her second trip to Detroit, Gaston was also able to return to her home base of Build Institute and meet the two students who were interning there that summer through DukeEngage Detroit.

“I am absolutely thrilled that Keiley’s time with our DukeEngage program helped inspire her to more deeply explore the trends of economic development and social innovation in Detroit,” said Katherine Black, a program leader for DukeEngage Detroit and program coordinator for social innovation and entrepreneurship at Duke I&E. “It is my sincere hope that more Duke students with passion and initiative like Keiley will become involved and see opportunity in this incredible city.”

As Gaston formed her thesis topic, she was introduced to Doug Brook, a visiting professor at the School of Public Policy, because a faculty member on the honors thesis committee thought Brook would be a good advisor for Gaston’s thesis.

Brook doesn’t normally work with undergraduates, and he said the opportunity to do so has been exciting.

“People always told me if I really want to see bright and hardworking students at Duke, I need to work with undergraduates,” he said. “Keiley has proven this to be true. She is an outstanding and well-organized scholar.”

Brook has a background in public budgeting and financial management, and once he and Gaston met, they discovered another serendipitous fact – Brook grew up in Detroit.

Because of his background, Brook has spent time monitoring the bankruptcy in Detroit and the corporate responsibility initiatives that have sprung up as a result.

“It’s exciting research, and she’s answering a really important research question,” Brook said of Gaston. “She’s analyzing strategies and practices that corporations are using in deciding how to spend their philanthropic dollars meaningfully and effectively.”

Brook said he’s happy to see that a summer program like DukeEngage afforded Gaston the opportunity to pursue this kind of research.

“This is a great example of the wide range of interdisciplinary opportunities that Duke offers,” he said.