Duke Receives a Thank You from the US Census Bureau

Duke University received a thank you from the US Census Bureau for taking part in the 2020 Census Community Partnership and Engagement Program. It was in recognition of a university-wide effort to promote census participation in 2019-2020.

Census data is used by the federal government to determine funding and representation, and is used by the state, county and city for planning and funding. Due to population growth, North Carolina could gain another seat in the U.S. House of Representatives as a result of the 2020 census. 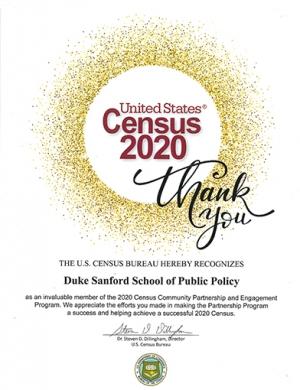 Duke’s effort involved people from across campus in Government Relations, University Communications, Student Affairs, Office of Durham and Community Affairs, and other departments.

BJ Rudell, then the assistant director of Polis: the Center for Politics at the Sanford School of Public Policy, and Chi Vo, program coordinator in the Office of Durham and Community Affairs, were co-chairs for Duke’s effort.

Vo and Rudell attended sessions of the Durham Complete Counts Committee, a joint city and county project. They worked to provide marketing and a public relations strategy for outreach to historically under-represented groups in Durham County.  Vo designed logos for the committee.

“The work of the Durham Complete Counts Committee along with other coalitions like SpiritHouse and You Can Vote was important to our communities and our future,” said Vo. “Engaging community members to complete the census meant that every voice and every family could count, especially for necessary resources, funding, and support here in Durham.”

Like many other things in 2020, the pandemic complicated the census count. The first mailings from the U.S. Census Bureau were sent out beginning March 12, the same week Duke made the decision to send faculty and staff to work from home and to tell students not to return to campus from spring break.

The census counts people where they live and sleep most of the time, including college students. The Registrar’s office provided the Census Bureau with student-directory data of students who lived in campus housing as of March 1. Undergraduate, graduate and professional program students were encouraged to complete the questionnaire based on their residence as of March 1.

As the door-to-door canvassing was curtailed by the pandemic, the deadline was extended until September. Duke continued its efforts to encourage participation at the beginning of the fall semester.