Philip J. Cook, professor emeritus of public policy and economics, and Jens Ludwig, director of the University of Chicago Crime Lab, have been awarded a $670,000 grant from the National Collaborative on Gun Violence Research.

Cook and Ludwig are co-principal investigators of the study, which will estimate the impact and cost-effectiveness of the Chicago Police Department’s new Area Technology Centers on arrest rates for homicide and nonfatal shooting investigations.

“Increasing arrest and conviction rates for shootings is one key to gun-violence prevention, and even more important with the recent surge of lethal violence in Chicago and other cities,” said Cook.

“The new Centers provide detectives and prosecutors with greatly improved access to video evidence.  If they prove cost-effective, other cities may want to consider adoption,” he said.

Cook and Ludwig have been collaborators on several research projects on gun policy and gun violence.

In their book Gun Violence: The Real Costs (2000), they developed a new way to calculate the toll of shootings in the United States a year, coming up with an estimate of $80 billion in 1998. The book provided a new perspective on the burden of gun violence that focused not on actual injuries, but on fear, avoidance and trauma by which gun violence impacts communities and beyond.

Cook also wrote a book on gun policy with Kristin A. Goss, professor of public policy, The Gun Debate: What Everyone Needs to Know. A revised edition was published this spring by Oxford University Press. 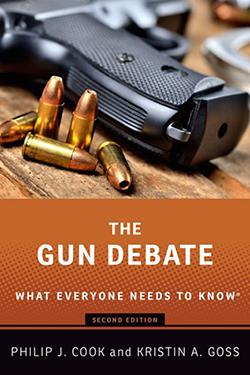 Earlier this year, Cook received the 2020 Stockholm Prize in Criminology for his decades of research on gun violence and its wide-ranging effects on society.

The award is among $7.5 million in grants announced by the Collaborative for 15 research projects that will produce evidence for improving gun policy in America. Cook’s study was selected from among 48 full proposals invited by the Collaborative after receiving 238 letters of interest responding to its proposal request.

The Collaborative funds rigorous scientific research with direct relevance to firearm-violence reduction in the United States. It was seeded with a $20 million gift from Arnold Ventures.