Coffee in Jordan Leads to an MPP at Sanford

Earlier this year, Maria Ramirez MPP’20 sat down to prepare to speak to members of the Sanford School Board of Visitors about her experiences as a student. As she looked through the packet of information about the board members, she was surprised to see a familiar face: Hardy Vieux PPS’93.

They had met five years before in a café in Amman, Jordan. Back for a visit, Ramirez was mulling over possible career paths after spending a year teaching at a public charter school in D.C. A friend arranged for her to meet Vieux over coffee. 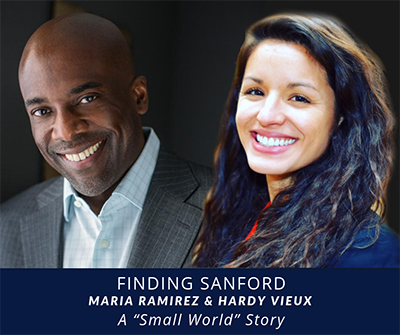 “He said that I asked great questions,” she remembered “and that a master of public policy degree could show me how to think in a different way --that this is a career where you can solve problems.”

Vieux was also going through a career transition at the time. He was in Jordan as a Felsman Fellow, a former Sanford School program that paired public policy and MFA graduates to work with international humanitarian organizations dedicated to the care of vulnerable children. Along with documentarian Laura Doggett, Vieux was working with Save the Children in the Za’atari Refugee Camp just outside of Amman. He focused on child protection policy for Syrian refugee children, drawing on his legal career in private practice, where he often handled pro bono juvenile justice matters. Before that, Vieux served as a military lawyer in the United States Navy’s Judge Advocate General’s (JAG) Corps.  Currently, he is the vice president of legal at Human Rights First in Washington, D.C.

Ramirez has a long-standing association with the Middle East. At 18, she took part in the National Security Language Initiative for Youth, a U.S. State Department program. She lived with a family in Cairo and spent 4 hours a day learning Arabic.

After earning a master’s degree in teaching in 2012, she went to Jordan as a Fulbright Fellow. When she first arrived and tried out her Arabic, “I got laughed at by taxi drivers,” she said.

In Amman, Ramirez taught English at the National Orthodox School and volunteered with the Orphan Welfare Association at a nearby Palestinian refugee camp. She found the work rewarding, but wasn’t sure how or whether to enter the field as a career.

After the meeting with Vieux in 2014, Ramirez didn’t immediately apply to an MPP program. “I had almost written it off, because I already had a master’s degree. But he had planted a seed that took years to grow,” she said.

For the next four years, Ramirez was an administrator at Carroll University in Wisconsin, designing programs to meet the needs of first-generation students, students of color and international students. Looking for a volunteer opportunity there, she found a group that supported refugees. She taught English classes for refugees and became friends with some of the families.

Finally, she applied to the MPP program at Sanford and entered in the fall of 2018. For her summer internship she became a global policy fellow with the U.N. International Organization for Migration in Geneva.

“It’s an opportunity to take a step back, and to position myself with the Duke name and my experience in Geneva to enter the field I have been interested in all these years,” she said.

At the Board of Visitors meeting in March, Ramirez and Vieux had a chance to reconnect.

“I got to thank him for playing a role in setting me on my path to an MPP. It’s these kind of experiences that reaffirm that Sanford was the right choice for me,” she said.

Maria Ramirez MPP'20 contemplates her future and a camel crossing sign in Jordan.