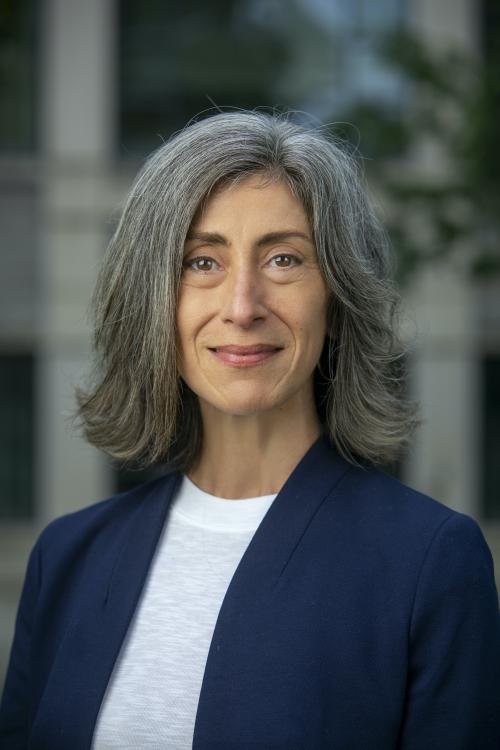 This spring, Lisa Gennetian joins the Sanford School of Public Policy faculty as the Pritzker Professor of Early Learning Policy Studies and a faculty affiliate of the Center for Child and Family Policy, a position she says perfectly represents her mission of interdisciplinary thinking and work anchored on the lives of children. She comes to Duke from New York University.

For 20 years, Gennetian has devoted her career to understanding the lives of families and children in poverty and the policies intended to support them. As an applied behavioral economist, she uses the science of psychology to understand factors that influence parents’ economic behavior and access to income, as well as shape the quality of children’s home environments. She applies these insights to design strategies for interventions that promote children’s well-being.

Gennetian attributes the genesis of her career as a child poverty researcher to a stroke of good timing and a healthy dose of luck during her first job after earning her PhD in economics from Cornell University.

Her entry to MDRC, a social policy research organization, was fortuitously timed with dramatic shifts in America’s thinking about social welfare programs in the late 1990s.

“How the actual lives of children would be impacted were neglected from the policy debates at that time,” says Gennetian. “Childcare, for example, was not center stage even though the key policy under debate was to push parents—mostly single mothers—into the workforce, even those with infants as young as 6 weeks.”

While at MDRC, Gennetian was a lead investigator of the Minnesota Family Investment Program (MFIP), an innovative welfare reform initiative that aimed to encourage work, reduce dependence on public assistance and reduce poverty. It was also one of the first to test something called an earned income disregard so that working always paid more than staying on public assistance.

The study produced a cluster of surprising findings that quickly received county, state and federal policy attention: The income boosts experienced by MFIP families contributed to improvements not only in economic well-being but also in mothers’ mental health, parenting and children’s cognitive and behavioral development.

“The findings from MFIP floored a lot of people. No one expected to see the positive impacts on children,” says Gennetian. “What we found was pathbreaking in the scientific literature, and we came closer to being able to say that poverty reduction contributes to children’s well-being.”

The early findings from the MFIP trials directly shaped the program as it exists today in the state of Minnesota.

The study was also among a few that led Gennetian and a team of colleagues to launch the Baby’s First Years study, recruiting 1,000 mothers and their newborns from four different U.S. metropolitan areas in 2018. The ongoing randomized control study, which Gennetian brings with her to Duke, is the first in the United States to assess to assess the causal impacts of poverty reduction on infant and toddler development. The nearly $20 million effort, funded by the National Institutes of Health, foundations and a $500,000 grant from New York City, involves giving monthly installments of unconditional cash to low-income mothers over the first three years of their child’s life to test whether money itself improves family life and child development.

“Beyond its contributions to basic social and neuro-science research, Baby’s First Years will provide evidence that will help inform policy debates about how income boosts through existing anti-poverty initiatives like the earned income tax credit and how cuts to social benefits impact children in the most formative years of their development,” says Gennetian of the study.

Gennetian also brings to Duke the beELL Initiative (short for Behavioral Economics Early Language and Learning), which she launched in 2015 to harness insights from behavioral economics to support parenting and early childhood interventions. For example, in New York City, these insights were applied to streamline public health initiatives focused on early literacy, such as the Talk to Your Baby program with newborn home visiting services.

The research from beELL more generally aims to deepen the field’s understanding of parent and caregiver decisions and engagement with early interventions, as well as test how tools from behavioral economics can enhance the impact of such interventions and support parenting.

Gennetian was first introduced to the field of behavioral economics by prominent behavioral scientists Sendhil Mullainathan and Eldar Shafir whose work flips the long-held thinking that people are poor because they make bad decisions.

“Their work really changed the landscape of poverty research in the U.S.,” says Gennetian. “It is radical to think about how poverty itself can be depleting and can affect your good intentions to get out of poverty.”

Now, as a professor at the Sanford School of Public Policy, Gennetian’s top priorities include training and mentoring young scholars and sparking their passion for economics and poverty research, of course all with an interdisciplinary twist.

“I am incredibly grateful to the senior scholars who mentored me, and one motivation for me to be in a policy school is to give back to students what others gave to me.”

Sanford School Dean Judith Kelley said Gennetian’s appointment adds to the strengths of the school and affiliated Center for Child and Family Policy.

“Lisa is a superb hire for Sanford. She has a long track record of asking cutting-edge policy-relevant questions. She is truly motivated by how her work can help children and families and she will strengthen our school’s commitment to excellence and service, among our key values,” Kelley said.

Gennetian’s professorship is generously supported by the J.B. and M.K. Pritzker Family Foundation, a champion of quality early learning for almost two decades.

“As a champion of quality early childhood development, we are proud to support research to improve developmental outcomes for children and our society. Lisa Gennetian’s role as the Pritzker Professor of Early Learning Policy Studies at Duke University’s Sanford School of Public Policy will contribute to vital scholarship intended to improve developmental outcomes,” said Janet Froetscher, president of the foundation.

This semester, Gennetian is teaching Public Policy 303, microeconomics. She will incorporate lessons from many of Robert Frank’s books, including The Economic Naturalist and The Winner Take All Society, co-authored by Sanford Professor Emeritus Philip J. Cook.

“It’s exciting to come full circle,” she says. “Microeconomic concepts can be very abstract, yet they filter into many of our daily decisions and choices and shape how policymakers think. I’m hoping to bring in both of these into the classroom, daily life and policy spotlights. It’s going to be hard but also fun!”

The first in her family to attend college, Gennetian holds a PhD in economics from Cornell University and a BA from Wellesley College. She is an affiliated professor with the Abdul Latif Jameel Poverty Action Lab (J-PAL), and previously held an appointment as a research professor in the Institute of Human Development and Social Change at New York University’s Steinhardt School of Culture, Education, and Human Development.