Many students come to college and say that college saved them, but Duke actually saved Chasity Boyce PPS’06, years before she was ever a student.

“Duke saved my life,” Boyce said. After being born at High Point Regional Hospital, Boyce was struggling to breathe. Doctors there could not figure out what was causing her to stop breathing. She was transferred to another hospital and subsequently, airlifted to Duke, where they realized there wasn’t enough surfactant in her lungs. Duke was able to give her the right diagnosis and treatment, saving her life.

“I grew up always, like, I’m going to Duke. It wasn’t even a question in my mind.” She set her goal to do something with her life and then be able to give back to the university.

Boyce did all the things that one does to ensure acceptance to Duke. She worked hard to get good test scores, make good grades, and be involved in the community. Because of her upbringing and community support, “it was like breathing” to her.

Which was not a problem for Boyce, as she told her parents at age 17, “I’ve got it.”

“When I won the [Trinity] scholarship, I was like alright. I’m in, I’m going to Duke… I told my parents I was going to handle it.” And she did.

The Trinity Scholars program honors Duke’s origins as Trinity College, in Randolph County, North Carolina. This provided Boyce with a full-tuition scholarship to Duke. Even with all those wins, she still faced some challenges.

Despite being a wonderful school, it did not change the fact that Duke was a predominantly white institution and figuring out how to navigate the university, find a support system, tackle a challenging curriculum and define who she would be did not come easy to her. Coming from a place where school previously did come easy, Boyce, like many first-year students, had a self-reckoning moment. One where she had to figure out how to meet all of the new demands during a pivotal time in her life. 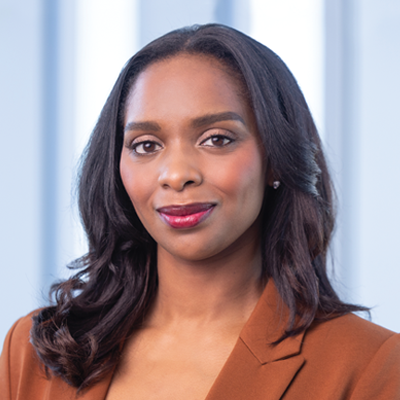 The Trinity Scholarship meant a lot to her, but also to her family and the community that raised her. Duke opened up a new and unfamiliar world that she did not know how to traverse. The scholarship meant so much to so many and she did not find early success in the traditional ways we define it, “I felt the weight of that.”

Even though she faced some challenges, “every interaction I had with Duke people just made me want to be there.” Boyce knew that graduating from Duke meant she would always have opportunities, and the university would provide her with a strong foundation.

Before choosing public policy as a major, she didn’t know a lot about it. She heard upperclassmen talk about it, “but the idea that I could start to learn how decisions are made that impact this greater group of people and thinking about the public was intriguing to me.”

Being at the Sanford School also exposed her to professors “who were renowned scholars and [she] wanted to learn from them.”

“Tony Brown’s leadership course was next level for me,” she said. Her enjoyment for the course was driven by his energy and his challenge to his students to think differently, “From an analytical, educational, forward-thinking [plan] about how you will then show up and impact the world. That was life changing to me.”

“His ability to check in with students and update them on what he was doing and then connect current students with former students was incredibly impactful for me.”

While Boyce notes she has always been observant, able to analyze others decision-making and see the greater impact it has in a larger society or organization, but she says, “hands down I honed that skill at Duke.”

I am a strategic thinker committed to impacting change.

“Duke took something that I had naturally, that I cared about, or found myself good at and really taught me how to implement that, to be an analytical thinker and to be even more strategic.”

After graduating from the Sanford school, Chasity attended Howard University School of Law.

“I went to Howard because they had the number four job recruitment program in the nation.” Strategically, she realized that “if people wanted black lawyers they were going to Howard for them,” and she needed to work after school. But there was also intentionality to create a different educational experience by attending an HBCU (Historically Black College or University). She wanted to be surrounded by like-minded individuals who looked like her and were also driven to become forces and change society and the world.

Focus on diversity and inclusion

These educational experiences and time practicing as a lawyer led Chasity to pursue diversity and inclusion work. Currently, Boyce serves as the Chief Diversity, Equity and Inclusion Officer at Barings, a global investment manager with $349+ billion in assets under management (AUM).

“I joined Barings back in November of 2020,” while six months pregnant, and relocated back to North Carolina in August. 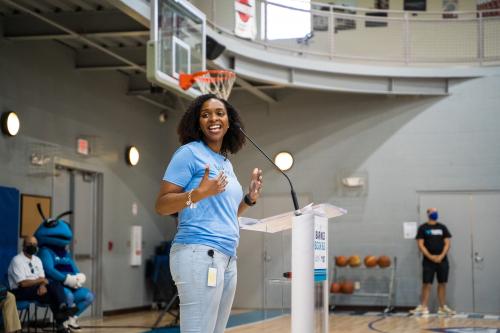 “Now that I’m back, I’m hoping to do much more and be called on to serve in whatever way the school needs me.” In the past, she has volunteered with the school by speaking in classes and mentoring students.

Boyce is also driven to volunteer for causes tied to social equity, education and at-risk youth. “I have a non-profit that I am very, very passionate about to help women of color law students.”

She is the co-founder of DAPP (Diverse Attorney Pipeline Program). This program assists the students by providing academic support, mentoring and job placement following their first year of law school. The goal is to make sure the women “have access to all of the coveted positions in the legal system industry and… know that they have a space there, in an industry that is not very diverse.”

Despite where her career has taken her, she is always cognizant of the responsibility to create space for others. She reflects on a family mantra: “We’ve been blessed so we are going to be a blessing to others. That is what has driven me my entire career.”

This is why she continues to give to the Sanford School. “You have to pay it forward.”

Reflecting on her fellow alumni, and those she has seen come through the program, they are the leaders making decisions for the country and world, and impacting people’s daily lives. “It’s important to continue to give to that effort, of my money, but also my time.”

To her, it’s imperative to continue to invest in the current and future students at Sanford. “The generation coming behind us is crazy talented, crazy passionate, is a group that is going to demand that the world, the state, the city be a better place.” Boyce has a lot of faith in the world and the generation coming after.

She describes a public policy degree as one that gives you the ability to evaluate how governments and organizations make decisions for their people. “I feel like I spend every day doing that.”

As she reflects on where she has taken her career and how her Sanford education prepared her to think critically and analyze problems, Boyce is grateful for how she has been able to impact social policy and change with a focus on diverse communities.

“This is my passion and life's work.”