The work of Anirudh Krishna

A ‘Worm’s-Eye View’ of Poverty

Two central questions drive Anirudh Krishna’s research into poverty: why do some poor people escape poverty and others do not, and why do some well-off people fall into poverty?

“Poverty is experienced by individuals, but poverty at the individual level has escaped policymakers,” says Krishna. Many of his insights have come from scrutinizing conditions on the ground, taking what he calls “the worm’s-eye view.” 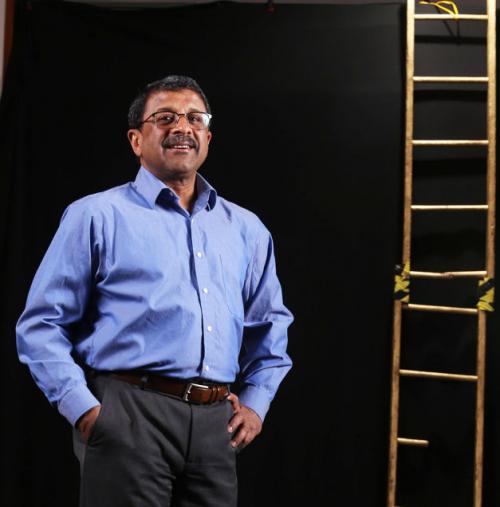 That closer view reveals the dynamic nature of poverty. “Poverty isn’t just reduced, it also grows,” he says. There are forces that make it easy to fall into poverty, and harder to climb out.

Krishna has written and edited several books on these questions. The two most recent, The Broken Ladder: The Paradox and the Potential of India’s One Billion, and One Illness Away: Why People Become Poor and How They Escape Poverty, examine those larger forces, such as illness, job loss and lack of a clear, available and reliable way out. 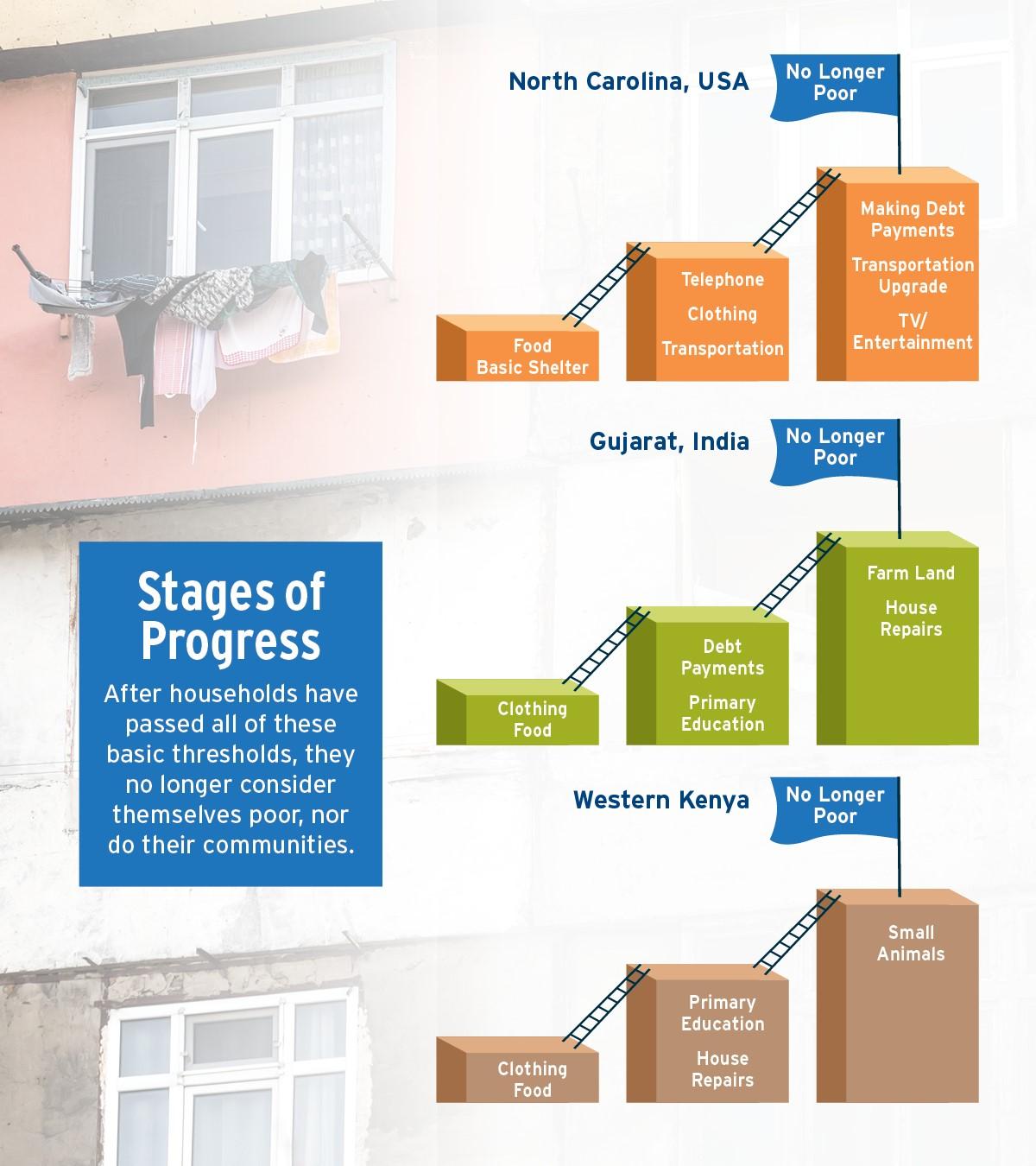 Many governments make decisions about program eligibility through use of a “poverty line” — a level of income that separates “poor” from “not poor.” But clearly, earning a few dollars more than the stated poverty level doesn’t make a family prosperous or prevent them from slipping back below the line. A huge amount of data gets collected about incomes and the numbers of households at various income levels, but there is not a corresponding amount of data about the processes that create these levels, Krishna says.

Krishna has worked with poor communities in India, Africa, Latin America, the Caribbean and the United States. Although his research is international in scope, he studies poverty not only as an individual phenomenon, but as a local one.

In order to better understand how and why people move into and out of poverty, Krishna needed a more nuanced definition of poverty than the standard income-based economic tiers. This led him to develop what he considers his most important contribution to the field of poverty studies, a methodology he calls “Stages of Progress.” Through his cross-continental field research, Krishna discovered what characteristics and resources households within particular communities need to move from poverty to prosperity.

“People’s understandings of poverty are most often expressed in terms of successively acquired capabilities,” Krishna says. In his first field studies in Rajasthan, India, Krishna found a remarkable consistency across villages in the way people identified levels of poverty.

You are poor when your creditors stop asking for payment because they know you cannot pay. You are poor if, when it rains, you get drenched inside your house, agreed the villagers. At the most dire stage of poverty, people focused on access to food and clothing. The next levels were housing and education for children, followed by household repairs and debt payments.

Krishna’s team of researchers found the first levels were similar across locations, in Peru, Kenya, Uganda, India and Durham, N.C. After these levels, there was more variation among which assets and capabilities signaled progress up the ladder. Definitions of poverty depended on the location, whether rural or urban, developed or emerging countries. In Durham, transportation was the final asset needed to lift a household out of extreme poverty, while in Peru it was obtaining small animals.

The Stages-of-Progress methodology makes it easier to see which households were descending into poverty over time, bit by bit, by marking the loss of assets and capabilities that are seen as important in each community. It can also distinguish not only the households that are moving up and down between the stages, but those that have remained poor or prosperous over the same period. Using the methodology can also help researchers and policymakers find the local causes of poverty, the micro-level reasons, such as illness or loss of the family breadwinner, and create better tools to address those reasons.

The Stages-of-Progress concept has helped shift thinking about poverty interventions. Instead of focusing only on helping people out of poverty, many NGOs, especially in Canada and Great Britain, have begun developing programs to prevent future poverty. In addition, other scholars have built upon his work, Krishna says. 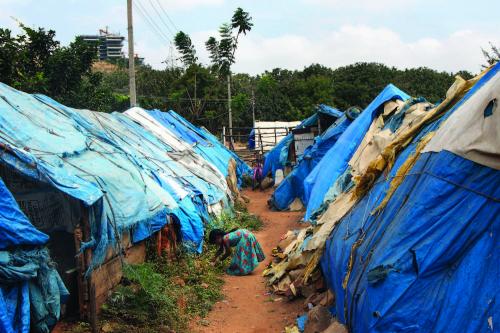 Despite the stigma associated with poverty, the majority of poor people are not poor because they are lazy, have bad habits or don’t work hard, Krishna says. Most of them are poor because of negative events beyond their control, such as loss of a wage-earner, crop failures or high-interest debt, events Krishna calls “downward tugs.”

Most households can cope with one or two downward tugs, but the poor frequently experience a series of negative events that deplete their resources. But across cultures and continents, the most frequent and biggest downward tug is ill health and health care expenses. A poor person’s body is often their main asset. It is an asset that frequently is uninsured, and one that, through accident or disease, can quickly flip from being an asset to a liability. The loss of earning power and the high cost of treatment is a poverty trap found everywhere Krishna has studied.

“Thousands of families are only one illness away from poverty,” Krishna writes. “Improving people’s access to reliable and affordable health care is essential to combat the growth of poverty.” 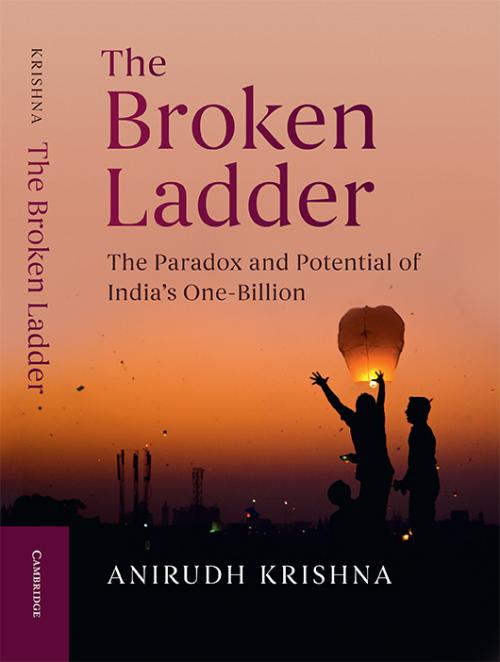 In both books, The Broken Ladder and One Illness Away, Krishna tells the story of Chandru, a boy made lame by polio, who lived in a village in Andhra Pradesh. Upon learning that Chandru’s favorite subject was mathematics, Krishna posed three math problems for the boy. Chandru quickly solved them, then with an impish grin, posed three problems in return. Much to his chagrin, Krishna struggled to solve one of them.

From the boy’s father, Krishna learned of Chandru’s ambition to study engineering. The father commented that no one in the village could help his son, and the family lacked the resources for a college education.

Krishna, who formerly worked in the Indian Administrative Service, drew on his government contacts to find a full scholarship and sent the application and instructions to Chandru. A few months later, he saw the father, and asked about Chandru and the scholarship.

For Chandru, the ladder to climb out of poverty was broken in many ways. He lacked access to education, and he lacked information about how he might afford education and about what steps one needed to take to become an engineer. Attitudes and beliefs also held him back. He lacked role models and guides, people who could help him find the way out.

“Poverty reduction takes place one individual at a time. But if that individual cannot see a path, he will not make that climb,” Krishna says.

Krishna’s work has a forward-looking aspect. The nature of work is changing, he points out, such as the gig economy overtaking manufacturing jobs in the developed countries. Larger forces such as globalization, urbanization and technological advancement are rapidly changing the labor market.  Societies can’t afford to waste the potential of the majority of their populations if they want to avoid widening the pool of poverty in the coming decades.

“We need to widen the pipeline of people and ideas,” he says. “The society that nurtures human capacity, not just depending on natural resources or history, will be the most successful in the future.”

Growing up in New Delhi, Anirudh Krishna saw people living in poverty throughout the city.  “I thought joining the Indian Administrative Service would be a good way to tackle the problem, and it was,” he said.

Krishna earned a master of economics at the Delhi School of Economics and studied at Harvard University’s Kennedy School to gain insight into how government can create change. For more than 14 years, he worked for the IAS, implementing programs in both rural and urban communities. As he rose in the ranks, he spent less time in the field and more time with policymakers.

A sabbatical at Cornell University convinced Krishna that he could make a greater contribution through research, while still doing field work and engaging with government agencies, NGOs and ordinary people. He earned a PhD in government from Cornell and joined the faculty at Duke’s Sanford School of Public Policy in 2000.

At the Sanford School, he started a summer program in India that helps train U.S. and Indian students for international development work. He also served as Associate Dean for International Academic Programs from 2010-2015, and is an affiliate of the Duke Global Health Institute. His most recent book, The Broken Ladder, was shortlisted for the first Kamaladevi Chattopadhyay NIF prize.

Krishna has a home in a rural village in central India, where he lives for several weeks out of the year. “Dignity, good humor and a sharp wit, I have found, have little association with poverty or with riches,” he says.