“She wanted a solution to migrant labor by end of day Monday. It was a Thursday.”

At the time, Sam Walker PPS ’80 was the acting administrator for the Wage and Hour Division of the U.S. Department of Labor. The directive was from Elizabeth Dole, U.S. Secretary of Labor under President George H.W. Bush and fellow Duke alum. Dole had just returned from a visit to sugarcane fields in Florida and was so horrified by the conditions she called on Walker for an immediate solution. 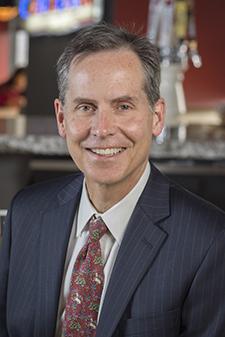 “I turned in our report on 5:01 that Monday,” Walker recalled.

“When I received feedback a few days later, the first note was a circle around the :01.”

Walker may have missed the mark on his project timeline, but that did not stop the plan devised by Walker and his team from later being implemented to improve wages and working conditions for hand-harvest migrant workers across the nation.

Adaptability has been a hallmark of Sam Walker’s professional career, one defined by regular movement between private sector and public service. With each new arena, Walker tries to find ways to serve, drawing upon prior experience and a strong internal foundation.

“I’ve found that it is more sustainably rewarding to give than to consume,” he said.

From the start, Walker’s career path was a bit unorthodox.

“When I graduated Duke, my first job didn’t exist yet,” he explained.

“Phil Cook connected me with the U.S. Department of Justice and said don’t worry, there will be a job for you when you get there.”

The job was as a policy analyst in the Criminal Division of the Department of Justice where Walker assisted in the investigation and prosecution of white collar crime.

After receiving his J.D. from Harvard Law School in 1984, Walker joined a firm as a trial lawyer in Charlotte, taking numerous large civil cases to verdict and arguing before the North Carolina Supreme Court. Despite his success in law, Walker still felt compelled to return to public service.

“It’s fun to work on serious issues in the public arena,” Walker said. “It’s important to me to have a chance to be part of something larger than myself. That doesn’t have to be in vocational public service, but for me that’s what it meant.”

From 1989 through 1992, Walker held multiple positions in the George H.W. Bush Administration. This included running the largest agency in the U.S. Department of Labor, the Employment Standards Administration, as well as a policy appointment at the U.S. Department of Education. In 1993, Walker joined a law firm in Washington D.C. where he used his experience in the Department of Labor for the negotiation and implementation of the Harkin-Engel protocol to improve labor standards in the growing and processing of West African cocoa.

Upon moving to Colorado in 2003, Walker transitioned once again, this time into the business world.

“When I think about my PPS experience, one tool that I always come back to is understanding institutions against the broader frame of public policy,” Walker said.

“Even in the business sector you have to understand your stakeholders. Who are the communities and nations that your business will directly impact and how do you positively contribute?”

As Chief People and Legal Officer at the Molson Coors Brewing Company, Walker reshaped the company from the inside out with an emphasis on diversity and global reach. One of the most interesting projects in this regard was the acquisition of the largest brewery in Central Europe, a task which was just as much about people as it was business.

“We were negotiating with a team of people from across the Balkans, including Serbia, Croatia, and Montenegro – some of whose fathers had been in combat against each other in the Balkan Wars” said Walker.

“What I learned from that experience is business doesn’t solve every problem, but it can create alignment towards common progress. It allows people to cross borders they may not have otherwise.”

Of all the challenges Sam Walker has faced, however, one is on an altogether different plane. In 2011, Walker’s son Rennie was found dead in his apartment after struggling to find his way in life.

“Life can be awful and hard” Walker said. “When life deals us these things we have to think and pray: what is our attitude? What is life trying to tell us and how do we make things better? The best we could do to make sense of a great tragedy was to serve others.”

Believing that Rennie was discouraged by an inability to find work, Walker and his wife, Cynthia T'82. have served to create more doors of opportunity and the keys to open them for people struggling to find employment.

Walker retired from business in 2018 to become executive director for the Colorado Department of Labor and Employment for then-Governor Hickenlooper. Walker implemented several innovations, including modern youth apprenticeships, sector partnerships in healthcare, education, and retail and encouragement of hiring based on demonstrated skills rather than proxies. Governor Hickenlooper commented how Walker has “electrified and driven this vision of reimagining the entire process” of learning about, through and at work.

With that formal assignment over, Walker now serves Colorado Attorney General Phil Weiser as the office’s executive in residence, working with a team to reinvent how the office provides legal services to Colorado’s cabinet agencies, boards, and commissions.

Sam Walker also serves as a member of the Sanford Board of Visitors and he and Cynthia are generous supporters, continuing to give back to the school that shaped their lives.

“As a graduate I wish someone had said to me, figure out not what you want, but what you need. There’s freedom in that, freedom to serve others.”