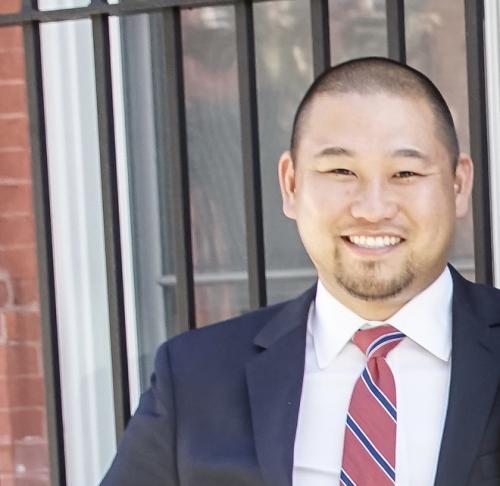 Sanford alum Felix Li PPS’07, has always had an intimate relationship with societal injustice and a knack for engaging in opportunities of change. The former came from growing up as an Asian American, first-generation immigrant in California. He was born in Eastside San Jose, a working-class neighborhood, but around age 11, his family moved to Los Gatos, a predominantly white suburb.

Learning About Race and Privilege

Then, in high school, as he was trying to fit in, he stumbled into change-making. A teacher recommended he participate in Camp Anytown, an overnight retreat dedicated to discussing race and privilege.

“That was probably my first time engaging in those issues and in our community, starting to have a language or framework to think about social justice and race,” says Li.

Despite his peer troubles, Li became very active in school. He was a varsity soccer player, yearbook editor, worked on race relations and social justice, and more. He says these experiences helped him develop skills to lead and fight for social justice. Still, he struggled.

“I think I had internalized white supremacy at that time,” says Li. “That’s not what I said then, but looking back, that’s probably part of why I was trying to assimilate.”

Then came college. Aligned with his natural tendency toward service and leadership, and thanks partly, he jokes, to stereotypical Asian American parental urging, Li intended to pursue medicine. He chose Duke for its hospital and strong pre-med program. But when organic chemistry didn’t go well, he reconsidered his passions and enrolled in a Sanford public policy course on social entrepreneurship, with Professor Tony Brown, then the co-director of the Hart Leadership Program.

“That’s where I saw the through line of helping people and impacting communities through policy and social entrepreneurship and I realized I was totally on the wrong side of campus,” says Li, who then became a double major in Public Policy and Sociology.

At Duke, Li found a fresh start. There was still privilege, and visible identity divisions, but with increased diversity and so many people on campus who were passionate about similar things, Li found more community. He also once again became involved with race-focused change-making. In his freshman year, he became a founding facilitator for a group called Common Ground (now SPARC), which led immersive retreat experiences grounded in peer-to-peer conversations on race, gender, and other identity markers. Li also eventually became president of the student-run Center for Race Relations.

Among those highlights, he fondly remembers two other Sanford courses: one on enterprising leadership with Brown, and the other on the public policy of education and civil rights with Professor Robert Korstad. The latter exposed Li to the idea of public policy as a “product of systems at play – people creating systems and systems impacting people.”

Through Brown’s courses, Li learned self-awareness and personal leadership development around self-efficacy, but also collaboration – the value of working with different people on a common problem to create and iterate a plan, and “actually make change.”

Simultaneously, Li developed an interest in Teach for America.

“I saw education as an opportunity to roll up my sleeves, get my hands dirty, and be on the ground level of where policy is,” says Li. “I wanted to be in the classroom to really understand the impact of education policy and speak knowledgably to change that policy.”

Joining TFA right after Duke, in 2007, Li taught 8th grade math at a public school in New York’s Washington Heights neighborhood, while obtaining a MA in Secondary Education and Teaching from Pace University. As a teacher, Li saw how the New York City education system was failing many of its students. Some of his students still struggled to count and write complete sentences, and they weren’t being offered Algebra 1 in 8th Grade, a pre-requisite to having the opportunity to take AP Calculus as a senior. Li established a successful Algebra 1 program but some of his students wound up having to repeat much of the same curriculum in high school anyway because their zoned school did not offer a college preparatory pathway.. Seeing such issues partly inspired him to transition into school leadership.

Reflecting on choosing education over education policy, Li says he appreciates the more immediate feedback of seeing students grow “socially, emotionally… perhaps into the future policy makers of tomorrow.” Li jokes policy moves at too slow a pace for his taste.

“With the kids in front of me today, I can’t wait for a [political] administration’s… policy change to come tomorrow, because by then, they’re already out of the system,” says Li.

His first education leadership role came right after teaching, in 2012, as a Director of Operations for a New York public charter school system, Uncommon Schools. In 2019 he expanded his impact as an Associate Chief Operating Officer, and reached nine years at the organization in 2021. However, that year, Li and his wife – who also an educator – decided it was time to move with their two young children back to the West Coast, where both their families lived. Li became COO of a California public charter school system, Summit Public Schools, in June 2021. His role involves managing technology, facilities, operations, HR, and talent recruitment and selection, among other central office and school-site functional areas..

In charter schools, Li has found environments that truly focus on and work for kids, and it’s energized him. Especially now at Summit Public Schools, Li talks fervently about the system’s creative approach to preparing students to live a fulfilled life, which focuses more on social emotional development, mentoring and relationship-building, and offers self-directed learning. He feels they’re designing the “school of tomorrow.”

Thinking about how he got here, Li’s mind returns to Tony Brown. He gushes about Brown’s knack for taking the time to get to know people, build relationships, understand them, and push them to grow. He says this model of leadership influenced his path and influences how he works with students, staff, and colleagues. To pay it forward, Li offers advice for current students.

Says Li: “If it scares you, makes you uncomfortable, gives you pause--do it. And listen intently to the people around you who are sharing in the experience as there’s always something to be learned.”

Spoken like a true leader – and especially one used to fighting from the trenches.