Alumna Profile: A Global Citizen Dedicated to Paying It Forward 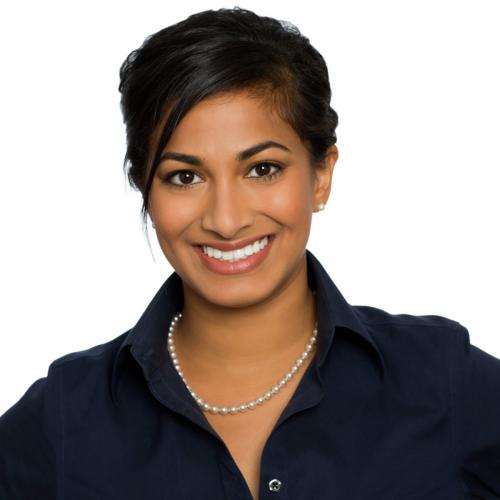 Before coming to Duke, Joy Basu PPS 08 lived her entire life in the same house, a split-level on a suburban corner in a conservative Illinois town. Since leaving Duke, she has moved almost twenty times, crossing the country and the globe. Currently living in San Francisco, Basu strives to “act as a thoughtful global citizen, with strong Midwestern roots.” While her path has carried her between the public and the private sphere, she has always felt a clear connection to her public policy training.

Growing up, Basu was mindful of being a first-generation American. Her parents had emigrated from West Bengal to Utah in the early 1970s, and then moved to Alabama before settling in Illinois.  Basu realized that she was fortunate to attend a great public high school, which sharpened her critical thinking, fostered her curiosity, and developed her personal leadership. Approaching graduation, Basu recognized that most “brown girls” like her didn’t have the same opportunities – whether they happened to be born in a nearby city or a more distant country. Hoping to learn to pay forward such privileges, she accepted admission to Duke University.

As a public policy major, Basu was deeply influenced by Professor Betsy Alden’s Women as Leaders seminar. In the classroom and through the course’s service-learning requirements, she studied the ways in which women’s experiences have been molded. She learned about influential women in public policy and the often-gendered effects of policy decisions. Passionate about history, Basu realized that many of those elements had been excluded from this country’s narrative.

Basu explains, “I started asking myself what stories I was not hearing, and how their absence shaped our analysis of public policy.” This is a practice she continues today, one of many lessons she still references from Professor Alden’s seminar.

Her sophomore year, Basu also met an “Ambassador in Residence” on campus from the US State Department, who encouraged her to consider a career in diplomacy. That summer, Basu was selected for a State Department Internship in Paris. She worked directly with senior Foreign Service Officers, supporting them in drafting cables, editing multilateral agreements and staffing cultural diplomacy events. This immersive experience strongly reinforced her interest in foreign relations.

Basu graduated in 2008 and delivered the graduation speech for the public policy undergraduate class. She hoped that her fellow alumni could hold fast to their gratitude and humility as they moved through their careers. Whether they worked directly in policy-making or not, she advised her peers to continue cultivating their curiosity, to talk to individuals unlike themselves and listen intently to their experiences. Above all, she emphasized a collective responsibility to pay their education forward, giving back to the world that had enabled them to be graduates of Duke.

The summer and fall after graduation, Basu served as an organizer for Barack Obama’s Presidential Campaign in Indiana.

“The work was emotionally and physically intense, but also deeply fulfilling. I felt as if we were helping to build the infrastructure of democracy everyday” she reflects. Basu recounts a memorable experience with an older man who had approached her on the street with a “less than friendly demeanor” and a large Confederate flag tattoo on his arm; after a long one-on-one conversation, he showed up to volunteer with her by making phone calls for Barack Obama. For Basu, this was a testament to the power of grassroots engagement.

Basu then joined McKinsey & Company full-time as management consultant. While the firm’s work mostly focused on corporate strategy, she also enjoyed a series of projects supporting international nonprofits and development agencies investing in food security. Those experiences led to an engagement with the World Economic Forum, project managing their New Vision for Agriculture initiative. Later, Basu moved to Addis Ababa, where she partnered with and coached Ethiopian civil servants to better enable international investment in agricultural development.

Basu earned her JD and MBA from Stanford University. While in law school, she was a leader of the Afghanistan Legal Education Project (ALEP); this work included helping build a secular and coed degree-granting law school in Kabul. She was also selected into the Criminal Prosecution Clinic with the County’s District Attorney, where she sought out cases that particularly affected women. “I approached law as the microeconomics of public policy” she remarked. Basu was also Co-President of the Women of Stanford Law.

Through the business school, Basu was connected to a women’s co-op in the West Bank region of the Palestinian Territories. She supported the organization on-the-ground over her summer break and remains involved today, believing in empowerment and development as tools of peace. She considers herself lucky to have “pursued a hands-on and impact-oriented education from Sanford to Stanford.” Finishing her advanced degrees 2015, Basu was named on Forbes’ 30 Under 30 List.

After graduate school, Basu worked as the first Chief of Staff at TPG Growth, a private equity fund.

“It was a lesson in witnessing and occupying a space where a few people control a lot of resources, and trying to influence that power for the better” Basu reflects. She was at the center of the design and launch of their $2 billion impact fund, a first-of-its kind in private asset management; she also served as the fund's global food and agriculture lead.

Currently, Basu heads her own boutique advisory, consulting to businesses seeking impact-integrated growth.  She serves on a number of nonprofit boards, including as a Trustee of the Heifer International Foundation.

“I believe in using private-sector solutions to help solve complicated social-sector challenges” Basu explains, “and my public policy education has been fundamental to that.”