North Carolina has 58 community colleges, serving approximately 700,000 students annually, spread all across the state. Jennifer Haygood MPP’01 is one of the system’s top administrators.

Since October, she has served as acting president while retaining her regular duties as chief of staff as the agency searches for a permanent head.

“My days are very dynamic as I move between a number of topics, everything from beginning the day having breakfast with a key partner, to meeting with our team about the strategic planning process, to heading to board meetings,” she said.

After completing her undergraduate degree at Rice University, Haygood worked for Teach for America in New Orleans for two years before coming to Sanford for her master’s degree. After finishing her MPP degree, Haygood entered the two-year North Carolina Governor’s Public Management Fellowship program. For several years, she worked at the General Assembly’s Fiscal Research Division, the office charged with providing policy information to lawmakers. As a member of the education policy team, she became well versed in the community college budget and the system’s financial needs. She also worked with the departments of Commerce, Agriculture, Labor and Environment and Natural Resources.

“Those were agencies that I was not previously familiar with, but I was able to use policy analysis skills to learn about their programming and evaluate their budget requests,” she said.

Later, these skills would come in handy when she was hired as the N.C. community college (NCCC) system’s chief financial officer in 2008. The job quickly became a challenge as the recession dried up the state’s revenue streams and the system had to find cuts to stay fiscally sound.

Some of her major projects centered on efforts to change the funding system for community colleges. Before 2008, the funding system hadn’t distinguished between the costs of different programs. An English class costs much less to offer than a nursing course, for instance. The NCCC former president was also interested in incorporating outcomes metrics to help determine how funds are distributed between schools. Haygood helped lead the study of the initiative, which proved controversial.

“Any time you make changes to the funding formula there’s winners and losers,” Haygood said.

Ultimately, performance-based funding was included as a small portion of the model. Promoted to co-executive vice president in 2013, she then took on more duties and worked to build more positive relationships between the system’s compliance department and individual colleges. In 2016, she became chief of staff and began leading the strategic planning process.

The NCCC system administration has a three-pronged role, Haygood said. First, it supports the State Board of Community Colleges in developing and overseeing statewide policies, such fees charged to community college students; second, it is the vehicle for advocacy to the General Assembly; and, third, it serves a support role, providing assistance with such issues as policy compliance, administration of State funds, and IT.

Beyond the leadership change at the top, it is also a time of transition for the state’s community colleges. Haygood noted that the system’s workforce is aging.

“We have significant turnover in our top leadership and throughout our ranks,” Haygood said. “With that retirement wave comes a loss of institutional knowledge we have to cope with, but it also comes with opportunity.” 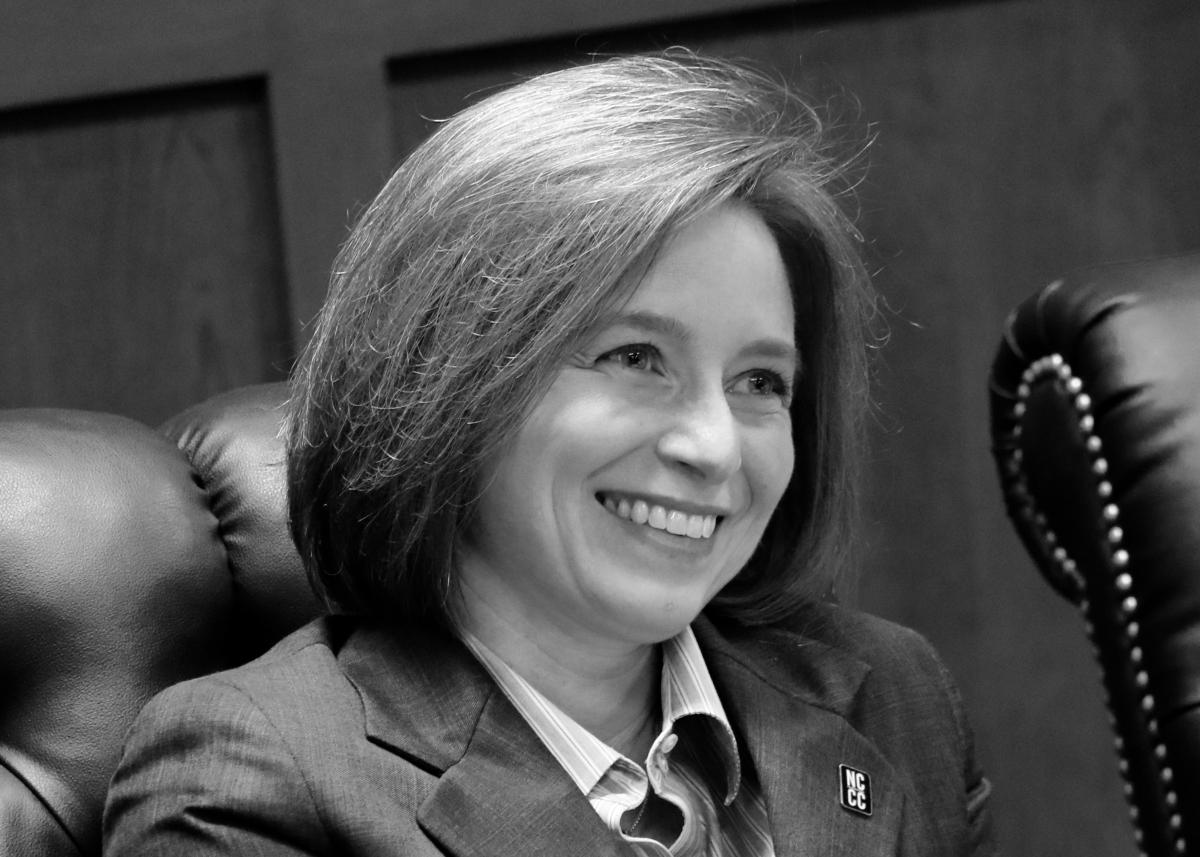 The system must adapt to the state’s urbanizing population, Haygood noted, and needs to explore ways to better support our colleges in an increasingly complex world, particularly those serving rural communities with limited access to higher education. Going forward, she wants to continue advocating for programs to support nontraditional college students. Haygood is proud to have been part of team that successfully fought for funding to support instruction during the summer at community colleges, which she considers a significant step forward for students who need to accelerate completion of their programs of study.

She credited her time at Sanford with providing a strong analytical background.

“Course requirements were very demanding,” she said. “That was good preparation for a very dynamic work environment. I think that the teamwork aspect that Sanford emphasizes is very important.”

Important to her work is the ability to build coalitions to create change, Haygood said. Sanford helped teach her that skill, as well as the ability to dissect statistical conclusions to evaluate whether they are fair.

She encouraged current public policy students to consider government work and not get too caught up in the idea of “status” in a job. Much policy change can happen in states and municipalities and it is important for bright minds to be involved at these levels.

“I’d challenge students to look at opportunity not based on whether a position has status but instead whether it will give them an opportunity to make an impact,” she said.