When Democratic National Committee Chair Tom Perez visited the Sanford School in April, a Sanford alumna was at his side.

Lauren Hendricks PPS’12 is the political surrogate program manager at the DNC. In that role, she coordinates the efforts of political influencers and celebrities – not just politicians or candidates – who travel around the country sharing the party’s message.

“People traditionally think of it as a bunch of celebrities who do fun events for President Obama or Secretary Clinton during a presidential cycle, but it’s so much more than that,” Hendricks said. “It’s a never-ending program where we make sure we are getting our message out to the public in various ways.” 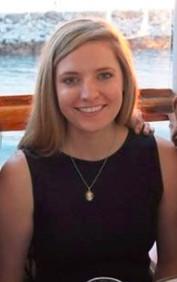 Since the 2016 election, Hendricks’ has been focusing on getting political surrogates out to states where they can interact directly with voters. Sometimes they attend fundraisers or rallies. Other times they are used for DNC events aimed at convincing people to vote. Hendricks lives in Washington, D.C., but travel is an important component of the job.

Originally from South Carolina, Hendricks had always wanted to come to Duke as a kid. When she fulfilled that dream, she kept busy on campus. She was president of the Public Policy Studies Majors Union, a tour guide, a member of Dukes & Duchesses, and of Alpha Delta Pi sorority. Her public policy internship was at the White House with the vice president’s chief of staff, where she helped research sexual assault policy.

She participated in the DukeEngage South Africa program and cited Professor Bob Korstad, who led that program, as influential.

During her senior year, she was offered a position as a consultant with Deloitte but deferred a year in order to accept a Fulbright grant to teach English in Mongolia.

“I wanted to go to a place where I probably wouldn’t have gone on my own,” she said, noting that the Mongolia program was also smaller than others, with a cohort of only eight Fulbright Scholars.

At the time, Mongolia was dealing with issues arising from balancing its traditional nomadic culture with large amounts of foreign investment in its natural resources, she said. Hendricks ended up getting assigned to a smaller town outside the capital so was even isolated from her tiny cohort. She said it was a learning experience.

“It was an interesting time to be there,” she said, adding that temperatures could drop to 30 or 40 degrees below zero.

Returning to the United States, Hendricks worked as a strategy and operations consultant at Deloitte for a little over two years before realizing she wanted to get into politics. But it wasn’t an easy transition. Hendricks said many political organizations seek people who have had political experience before.

“At Duke a lot of times we think of ourselves as smart enough to be able to figure out whatever role we are put into,” she said. “The political industry doesn’t believe that as much.”

It took a lot of networking, coffee chats and meetings with Duke alumni in order to find an opportunity, but it eventually happened.

Her first political job was for the DNC, researching then-candidate Donald Trump. After the Democratic National Convention, she joined Hillary Clinton’s presidential campaign, moving to Brooklyn to continue doing opposition research. Being on a presidential campaign was a unique experience, Hendricks said.

“It is what is happening in the country at that time,” she said. “There really isn’t a lot of bandwidth for other things or what other people are talking about. What you are doing is the focus of the nation.”

One of her research assignments for the campaign was the so-called “alt-right.” Her work was eventually used in a speech Clinton gave in Nevada. Reflecting on political jobs now, Hendricks said as long as students are hard workers and are willing to say yes to things that are thrown at them, they can find success.

Hendricks also encouraged current students to take advantage of opportunities Duke provides without worrying too much about the end goal.

“My Duke experience was definitely a hodge-podge of things that didn’t really seem to match up but I did them because at the time they were fun and interesting,” she said.

An Eye for Detail

Senator Kamala Harris (center) and DNC Chair Tom Perez (far right) greet constituents as Lauren Hendricks PPS'12, in the green dress, remains in the background, doing her job as coordinator of the event.