Emily Hadley PPS’15 discovered what she wanted to study at Duke when she took Public Policy 155 and Statistics 101 during the same semester and felt like they “fit together.” The skills she developed have been integral to her meaningful work as a college advisor, a graduate student, and now as a data scientist at RTI International.

When Hadley wrote her senior thesis project on predicting high school dropout, she did not expect to present her findings to the North Carolina Governor’s office two years later. 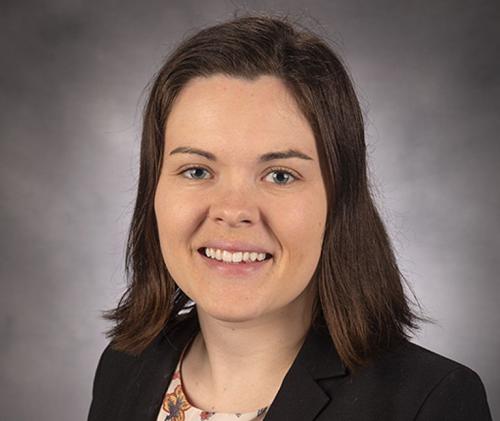 Hadley’s thesis asked: “Can we predict which eighth-grade students in rural North Carolina will eventually drop out of high school, and can we improve the transition from middle school to high school to prevent drop out?”

After collecting raw data from the NC Education Research Data Center at the Center for Child and Family Policy, Hadley used a multilevel logistic regression model to determine that attendance and math achievement in middle school were the most predictive factors for high school dropout.

To find an appropriate policy recommendation, Hadley analyzed 50 of the most successful programs in reducing high school dropout in the country.  She recommended the most feasible programs for rural NC would be math tutoring, community engagement and mentorship.

Two years later, by chance, she ended up sharing her work with the NC Office of State Budget and Management. As a graduate student in the Master of Science in Analytics program at NC State University, Hadley happened to connect with the Governor’s office when they partnered with NC State to visualize high school graduation rates. Given her additional expertise in the area from her thesis, Hadley was invited to visit the main office to present the results of her work.

At Hobbton High School in Newton Grove, Hadley’s role was to help create “a college-going culture.” Having grown up in rural New Hampshire, she understood some of the challenges of being in a rural community, and she saw the Advising Corps as the best way for her to give back.

Hadley says she made a significant impact at Hobbton High School by using data analytics to improve ACT prep courses for her students. For two hours every week, students went to different test prep workshops, divided into groups based on homeroom classes. This method of grouping students was not very effective because of the wide range of abilities within each group. Teachers had a hard time catering to each student’s particular needs and students weren’t benefiting from the workshops as much as teachers would have liked.

To improve these courses for both students and teachers, Hadley looked at the students’ practice test scores from preceding years and built a statistical model to predict each student’s scores. She then used a clustering algorithm to put students into groups based on skill levels.

This allowed teachers to design more effective teaching strategies for each group. Her efforts made it easier for teachers to work with students, and test score averages increased by half a point, Hadley said.

Hadley says the most important lesson she’s learned in her career so far is “good intentions are not enough.” The data science field “offers the promise to reveal issues” and “hopes to improve people’s lives,” but she is wary of collecting data without first defining the problem and asking the right questions.

Today, Hadley works at RTI, where she analyzes data to “uncover patterns and tell a story.” In her work, she uses statistical and machine learning techniques to address a variety of social challenges. Hadley says she’s always asking questions to make sure the algorithms and applications she is building are helping people, not hurting them, and to make sure that her good intentions can lead to positive results.