Being confirmed by the U.S. Senate for a high-level government appointment would be a highlight in anyone’s career. But for Mark Greenblatt PPS’ 95, becoming Inspector General of the United States Department of the Interior (IG DOI) also carried a broader significance: It is the first time the office has a Senate-confirmed Inspector General in more than a decade.

“I was thrilled about being nominated to this position. To be honest, I don’t think I could have dreamed up a better situation,” Greenblatt said. “I could sense that this was a once-in-a-lifetime opportunity to take the helm of a good, healthy organization that yearned for a clear, long-term vision.” 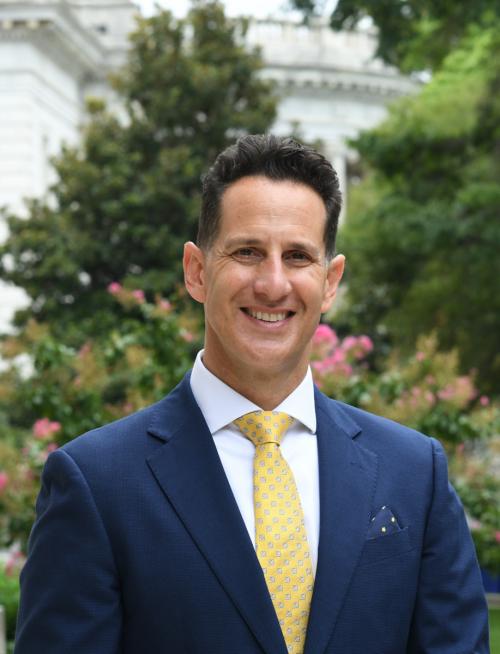 The inspector general’s office provides independent oversight of the department’s operations to ensure accountability for the proper and ethical use of public resources. It works to prevent, detect and deter fraud, waste, abuse, misconduct and mismanagement.

Greenblatt graduated from Duke in 1995 and took a gap year before attending Columbia Law School and receiving his JD in 1999. Originally intending to become a prosecutor, Greenblatt soon had a change of heart and decided to serve as a civil litigator instead, spending the early years of his career in a pair of private practice firms.

“I learned so much about leadership from my time at Duke,” Greenblatt said. “Small-scale experiences taught me invaluable lessons about group dynamics and leading groups of people.”

He gave an example from his time as a TA for an introductory public policy class. “It was the start of a new semester and, as I was introducing myself to my new class, I made an off-hand joke about the prior class asking too many questions […]

“I heard weeks later in my mid-semester reviews that my throw-away line had a real impact on the students—they had refrained from asking questions because of my joke.” This lesson about the power of words is one he has kept “firmly in mind” throughout his career. 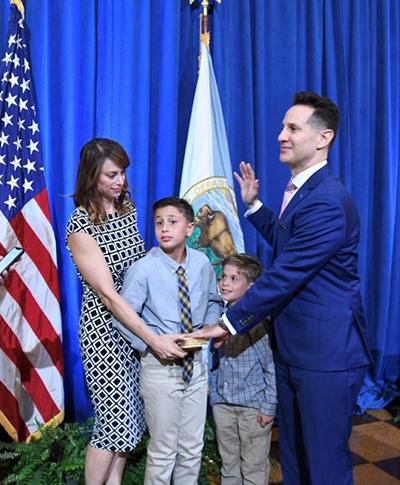 In 2003 he went to work with the U.S. Senate for the Permanent Subcommittee on Investigations (PSI), working as staff director and chief counsel to the minority. Inspired by his ability to uncover the truth and bring about positive change in the role, after five and a half years at the PSI Greenblatt went on to take more oversight roles in the Department of Justice and the Department of Commerce.

Over the course of his career, Greenblatt has been involved with hundreds of inquires involving a variety of federal agencies from the Justice Department, FBI, DEA and Patent and Trademark Office. One case that remains particularly significant is his investigation of misconduct in a Census Bureau office.

“The atmosphere there had grown toxic,” he recalled at his nomination hearing.

“Witnesses were scared and whistleblowers were threatened. In fact, one subject, while cutting a cake at an office party, moved the knife up and down in a stabbing motion and said, ‘This is for the ones who went to the OIG.’”

The investigation revealed more than $1 million stolen from taxpayers by a group of around 40 workers claiming 20,000 hours they did not work, as well as misconduct such as employees hiring friends and family. In response the Census Bureau closed the unit and implemented substantial changes.

Outside of the U.S. government, Greenblatt led an investigation exposing corruption in the United Nations’ Oil-for Food Program, a $64 billion operation, and has engaged in investigations into multiple Fortune 500 companies.

Greenblatt’s interests extend beyond the confines of his career. Inspired by the heroism of Audie Murphy, the renowned World War II soldier, he set out to find similar stories of courage and heroism that deserved similar acclaim. This led him on a five-year journey of seeking stories and soldiers willing to tell them. “Learning about great stories was not terribly difficult; convincing a military hero to share his or her tale in a book, however, can be a Herculean effort.”

In his 2015 book about soldiers’ acts of heroism, Greenblatt writes about “much more than just thrilling narratives of daring rescues and suicide missions,” focusing on the whole individual. One particularly powerful story includes an Army Special Forces commander who admired an Afghan soldier so much that, after the man died in his arms, he provided financial support to the Afghan’s family.

Until becoming IG, Greenblatt co-led a family nonprofit that recognizes exceptional students and teachers in Montgomery Country, Maryland, his home state. The fund commemorates his mother, a Montgomery County Board of Education member from 1976 to 1984. Since its founding the nonprofit has awarded $175,800 to 110 teachers and 520 students.

As he looks to his future as DOI IG, Greenblatt has one goal: dreaming big.

“I told the team in my first all-hands meeting that I want our office to be a premier OIG in the federal government. I had the great fortune to work at DOJ OIG under some of the giants in the OIG community, like Glenn Fine (former DOJ IG and current acting IG at the Defense Department), Michael Horowitz (DOJ IG) and Rob Storch (NSA IG). I believe they collectively created a premier operation and I am aiming to reach that level of consistent, across-the-board excellence.”

He wants the team to develop the skills to address future challenges. Greenblatt mentioned, for example, enhancing the OIG’s ability to mine data streams within their roughly $20 billion risk portfolio.