While at Sanford, Denoble’s involvement in Professor Tony Brown’s courses and service-based activities, both of which contributed to his being awarded the William J. Griffith University Service Award as a senior, inspired him to enter the field of social entrepreneurship. 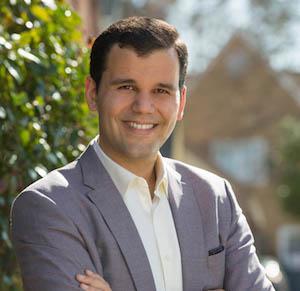 He had studied Chinese, so moving to China to continue learning seemed like a logical step toward a career that combined his interests.

“I graduated before Lehman crashed,” Denoble said. “People don’t understand what that was like. We were at the height of ‘Anything is possible. Whatever you choice you make after college was fine.’

While there, he got involved with the Beijing entrepreneurship scene and worked at a pizza restaurant and bar that was expanding rapidly through Beijing and Shanghai.

With his parents prodding him to use his knowledge of policy, Denoble started a company offering marketing services to Chinese healthcare companies.

He also noticed that few people outside of China were writing about private health care in China. Some scholars wrote articles about public health, but there was not much information available about the system as a whole.

Interested, he began writing, working the healthcare investment beat as a freelancer for business journals (most notably with the Nikkei Asian Review), and developing contacts in the industry with each interview.

Upon returning to the United States in 2012 for law school and a master’s degree in Chinese from the University of Michigan, Denoble continued writing about the Chinese heath care industry. Later—along with another Duke alumnus, Benjamin Shobert—he launched Seattle-based Rubicon Strategy Group, a company that consulted with American senior care and home health corporations seeking to enter the Chinese market

“Entering business made me realize markets weren’t just an invisible force,” Denoble said. “They are agglomerations of people and interests.”

Due to changing business dynamics and the rise of nationalism in politics, Denoble decided he wanted to do something different. An immigrant himself from the former-Yugoslavia, he felt he could work in immigration law because of his business and language skills and desire to make an impact on people’s lives.

“On a Friday we decided to dissolve [Rubicon],” Denoble said. “The following Monday I started a law firm.”

In 2016, he founded Bull City Lawyer, a firm that seeks to use technology to streamline legal services for immigrants.

“Soon after we started, the Western world experienced this populist moment that, from my perspective, requires a doubling down on liberal democratic values,” Denoble said.

Navigating immigration law can be nearly impossible for thousands of undocumented immigrants. It can be risky and intimidating for them to reach out and seek legal advice, and many are poor, lacking access to computers.

However, undocumented immigrants typically can access the internet through mobile devices. Denoble’s team, which included yet another Duke alumnus and Robertson Scholar, Austin Stanion, sought to leverage that fact by creating “Beyond DACA” a mobile-friendly webpage that allows immigrants to input information about their unique circumstances to screen themselves for potential legal paths.

Because it is run through a law firm, Denoble said, the technology creates an attorney-client privilege. Partnering with the Latin American Coalition based in Charlotte, the tool served thousands of immigrants in a few weeks. Many were able to identify possible options for receiving a legal status.

His site also includes a so-called “chatbot” feature connected to Facebook Messenger to provide immigrants guidance as they answer a series of prompts.

North Carolina in particular can be a difficult place for undocumented immigrants, Denoble said. Populations are dispersed across the state in clusters from Asheville to farming communities in the East, making it difficult for organizations to serve everyone. The state also has strict immigration courts and is far from detainment facilities where immigrants are often sent.

“Logistically and politically, we are a very hard state,” Denoble said.

In addition, Denoble, who has taught himself to code, received a $320,000 grant for the North Carolina Deportation Defense Project, a collaboration among advocacy organizations to develop a massive, linked representation system for immigrants. Just as in the health care industry, where patient records help hold all members of a care team accountable, such a system would compile an immigrants’ records to make it easier for lawyers and advocates across the country to assist them.

“You take all the information, make sense of it, put it in a structure that’s useable and understandable, and hopefully are able to handle more cases, Denoble said. “Instead of pushing back one at a time against what I see as an illiberal, undemocratic government, we get to push back pretty hard collectively.”

The firm also helps immigrants who want to start businesses. They offer a tool to help foreign nationals more easily register their companies as LLCs, which can protect assets more effectively than other options in case of deportation.

Denoble said it was important when working with immigrant communities to build trust by providing useful services.

Looking back at his time at Duke, Denoble credits Tony Brown’s courses as integral to how he thinks about creating organizations.

“I took the lessons I learned there about building organizations and looking for opportunities to create a social impact to heart,” he said.