Brett Chambers’ PPS’79 career can’t be described with simply one title, as he’s held varied positions in broadcasting and education. Now a professor at North Carolina Central University (NCCU), one of the top historically black universities in the country, he’s also a television producer, director and musician. His wide range of interests is what led him to become one of the early public policy graduates from Duke.

Chambers teaches mass communication, drawing upon his more than 30 years of experience as a producer and director of award-winning news programming for ABC’s WTVD in Durham, N.C., and for other networks around the country.

His achievements led to his induction into the National Black Journalists Association Hall of Fame in 2004. He’s also served as a project coordinator for several grant projects and education initiatives in communications, as well as science and art programs.

Opportunities he took advantage of as a Duke student led him “right into his career path” and continue to serve him well today, he said. As a freshman in 1975, Chambers was present at the beginning of what is now the Sanford School. 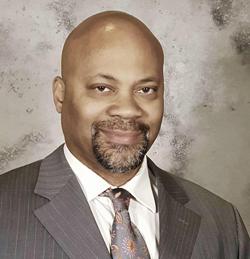 “Back then, public policy was just a program, still new. Terry Sanford, who was the president of the university at the time, was just a really good mentor to all of us. All of us were still trying to figure out what the program was going to be, just like the professors were,” he said.

Chambers remembers being in class with professors who were still in the process of writing the textbooks for the course. Although it was initially very trying, he found the rigorous course load and demanding schedule made him stronger as a student and as a professional.

“That was probably the perfect environment for me. It helped me think. You know, people talk about how critical thinking now has become just a buzzword. But when you’re building something that no one’s built yet… that’s problem solving. Every day is, as they say, ‘figuring it out.’”

Chambers originally wanted to study premed. He wanted to be in a profession where he could “heal people.” But when that didn’t work out, he found another way to achieve his goal of helping people by minoring in a subject many would consider the total opposite: music.

“[Doctors and musicians] both heal people; they both make a change. Sometimes music impacts people emotionally or spiritually. Sometimes it just makes you have fun. And you know, doctors heal in a more obvious way,” Chambers says.

“When I was taking care of my mother, who had dementia, sometimes I would take her to concerts, because the music put her in a different state of mind. It was very visible, watching her, the difference when she was listening to music to when she was not.”

Chambers’ late mother also had a huge influence on his decision to attend Duke, the only school he applied to.

“My mother graduated from Hillside High School and she wasn’t allowed to apply to Duke because she was African American. My grandmother was a maid at an east campus dorm. My mother’s great uncle worked in a lumber yard that was over by Duke Gardens. And one of her cousins worked in Duke Gardens.

“But, the smartest person in the family and one of the smartest students at Hillside wasn’t allowed to apply to the college and even have the opportunity to get rejected. And I thought this was a good opportunity for me to try and go avenge the family. And I did,” he said, smiling.

What Drives Him Today

“I wasn’t a social sciences kid, I was a hard sciences kid. I was into biochemistry, and physics, and all that. I could do a formula and get a definitive outcome with math and physics. You know, do an experiment and prove or disprove my hypothesis.

“But social science confused me because it was kind of messy. But after a while, it was that messiness that intrigued me. In the end, that kind of thinking and understanding of how to process information is what helped me become a really good producer and a really good director. And a good educator.”

Though he says he’s been called a “nontraditional” instructor, Chambers believes his tough academic approach is perfect for bringing the best out of his students.

“My pedagogies come from understanding where I want my students to go and where they want to go and then doing the research to understand what is required of them to get there. And then I try to bring those elements into the classroom.”

Chambers says he strives to help students develop confidence and capabilities. When they start to believe in themselves, that’s when he starts to see a difference in them.