During her master's program Philile Shongwe started an organization that advocates for healthy sexual choices for young women in her home country, the Kingdom of Eswatini in southern Africa.

Philile Shongwe’s family lives in the Kingdom of Eswatini in Southern Africa. Her dad works as a farm manager for a sugarcane company. The family home is in a rural area, close to the fields, so perhaps it makes sense that Sanford’s Master of International Development Policy (MIDP) degree caught her eye.

Landing a Duke-UNC Rotary Peace Fellowship sealed the deal. The fellowship includes a scholarship, and the flexibility to take courses at both UNC and Duke.

Getting her master’s degree was busy, but it also gave Shongwe the space to reflect. Like other MIDP candidates, she had been working full-time for a few years prior to starting the program.

“[Suddenly] my work wasn’t dictated by my employer; I was not doing projects for the company. I was choosing classes and engaging in classes that really speak to me,” she reflects.

Soon Shongwe had a new direction, one focused on girls. She launched an organization, Govuka, that advocates for healthy choices for young women in her home country. She says it’s common for girls in the Kingdom of Eswatini to become entangled in relationships with much older men, and that such relationships are not culturally frowned upon.  Girls in these relationships are known as “blessees” and according to Shongwe are five times more likely to be infected with HIV and to become pregnant when they have sex with older partners.

“In my mother tongue, ‘govuka’ means to fiercely protect,” Shongwe says. “I am deeply concerned about how we prepare young women for their lives and futures. Sex Ed is hard to talk about. Where I come from, the impact of dating the wrong person can lead to a lifelong HIV infection, or unexpected pregnancy, either of which derails young women’s lives more so than in many other parts of the world.”

The Govuka program trains girls to have agency over their sexual lives. The organization uses human centered design concepts. Groups of girls are presented with challenges related to intergenerational relationships. Govuka works with them through a design sprint, an ideation phase and helps with prototypes.

The idea is to get adolescent girls to look inward, to see themselves as “fully able to do something about this situation and to help other girls their age with the same challenge”. 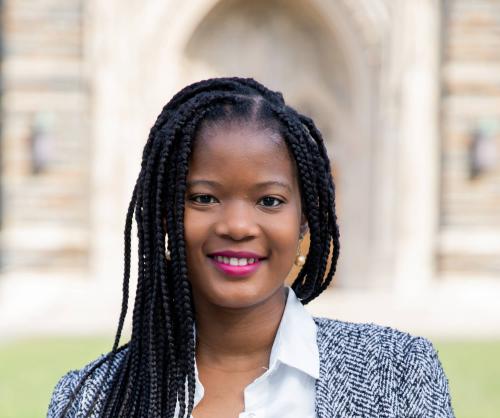 Before coming to Sanford, Shongwe had worked with data analytics at the Ministry of Gender in Malawi, and knew she liked crunching numbers. She especially liked crunching government numbers.

“Even as a young person, you could go in armed with technical skills and the gusto to say, ‘This is how you can use data, and how you can think differently about these programs that you are spending so much money running!’”

After graduation, Philile Shongwe will be joining Evidence Action, a group that scales evidence-based programs related to poverty. She will continue to scale her own organization Govuka at the same time.

“I’d like to give a huge thank you to Sanford,” Shongwe says. “I wanted to come here and explore who I was, and I had the freedom to do that. My program did not restrict me. I was able to take classes in public policy, in women, gender, sexuality and global health. That flexibility has been a gift.”

Carol Jackson is an EMMY and WEBBY award-winning media producer. Prior to coming to Sanford, Carol was part of the founding team for the nationally distributed public radio program, "The Story with Dick Gordon." She served as Managing Editor and Senior Producer for the program.

Earlier in her career, Carol worked in public television as an executive, producer and host in Boston, Baltimore and Illinois. She also spent time teaching in Japan. At Sanford she leads Sanford's video, podcasting, social media and website efforts. She produces the podcasts Ways & Means, and Policy 360. In 2019, Ways & Means was recognized with a national CASE Gold Medal award for excellence in university podcasting.

Carol lives in Chapel Hill with her husband and son.